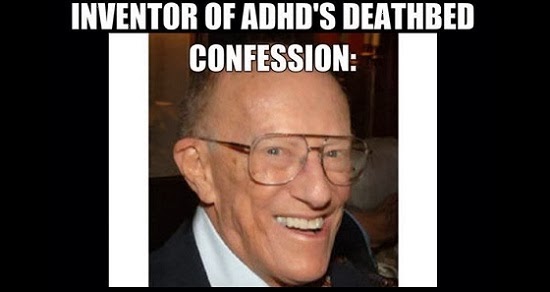 Bradlee Dean | Political Outcast“ADHD is a prime example of a fictitious disease.” These were the words of Leon Eisenberg, the “scientific father of ADHD (Attention Deficit Hyperactivity Disorder),” in his last interview he gave before his death at age 87 in 2009.(While some have described Dr. Eisenberg’s statement as an “exaggeration,” many doctors are coming to the belated conclusion that ADHD is often “over diagnosed” by the use of “fuzzy diagnostic practices.” Harvard psychologist Jerome Kagan, who is one of the world’s leading experts in child development, states:“Let’s go back 50 years. We have a 7-year-old child who is bored in school and disrupts classes. Back then, he was called lazy. Today, he is said to suffer from ADHD (Attention Deficit Hyperactivity Disorder). . . . Every child who’s not doing well in school is sent to see a pediatrician, and the pediatrician says: “It’s ADHD; here’s Ritalin.” In fact, 90 percent of these 5.4 million kids don’t have an abnormal dopamine metabolism. The problem is, if a drug is available to doctors, they’ll make the corresponding diagnosis.)Eisenberg made a luxurious living off of his “fictitious disease,” thanks to pharmaceutical sales. Coincidentally, he received the “Ruane Prize for Child and Adolescent Psychiatry Research. He has been a leader in child psychiatry for more than 40 years through his work in pharmacological trials, research, teaching, and social policy and for his theories of autism and social medicine,” according to Psychiatric News.Yes, it was even admitted that they are his THEORIES. The medical industry is using the guise of helping children to depersonalize and disconnect our children from a healthy, normal upbringing. Parents are placing their children on these drugs and subjecting them to what the world has to offer, when in fact all these children are looking for is their parents in hopes of being the blessing that God intended them to be.In the United States, 1 out of 10 boys among 10-year-olds takes medication for ADHD on a daily basis . . . with increasing tendency.American psychologist Lisa Cosgrove and others reveal the facts in their study “Financial Ties between DSM-IV Panel Members and the Pharmaceutical Industry.” They found that “of the 170 DSM panel members 95 (56 percent) had one or more financial associations with companies in the pharmaceutical industry. One hundred percent of the members of the panels on ‘Mood Disorders’ and ‘Schizophrenia and Other Psychotic Disorders’ had financial ties to drug companies.”And they are reaping major benefits from this “fictitious disease.” For example, the assistant director of the Pediatric Psychopharmacology Unit at Massachusetts General Hospital and associate professor of Psychiatry at Harvard Medical School received “$1 million in earnings from drug companies between 2000 and 2007.”Marc-André Gagnon and Joel Lexchin, a long-time researcher of pharmaceutical promotion, performed a study which shows that the U.S. pharmaceutical industry spent 24.4 percent of the sales dollar on promotion, versus 13.4 percent for research and development in 2004. That is almost twice as much money to push their drugs on people than the amount to research to make sure it they’re safe!This raises the following question: Are they safe?Read the antidepressant black-box warning for yourselves, and you will be alarmed by the side effects listed on the inserts:– Confusion– Depersonalization– Hostility– Hallucinations– Manic reactions– Suicidal ideation– Loss of consciousness– Delusions– Feeling drunk– Alcohol abuse– Homicidal ideationWhy would parents subject their children to drugs with such noted dangerous side effects?Dr. Edward C. Hamlyn, a founding member of the Royal College of General Practitioners, in 1998 stated, “ADHD is fraud intended to justify starting children on a life of drug addiction.”Source: politicaloutcast.comRead more at http://isupportorganic.blogspot.com/2013/12/the-man-who-discovered-adhd-makes.html#Klt9UeW0OzmA5GcD.99