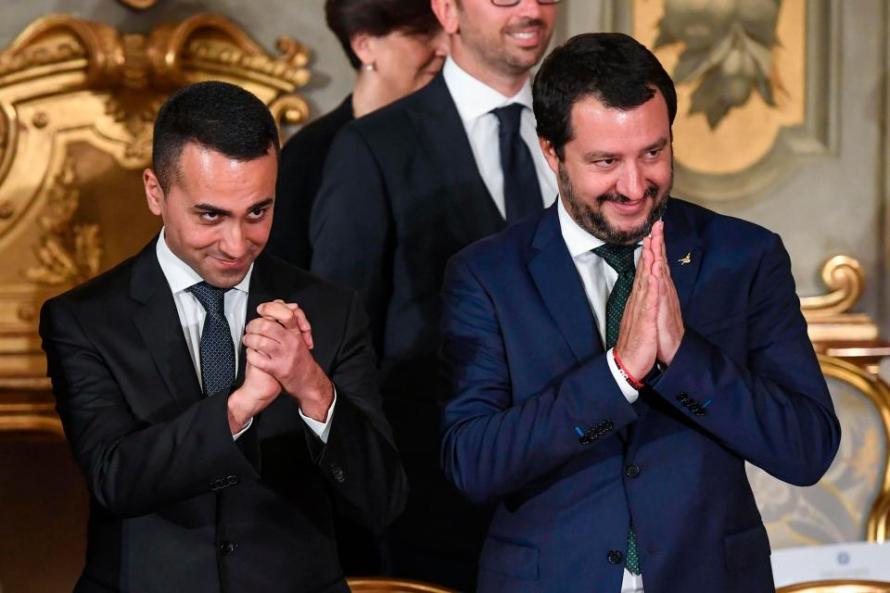 “The free ride is over…”

Source: “The Good Times For Illegals Is Over, Get Ready To Pack Your Bags”: Italy’s New Interior Minister Promises Mass Deportations | Zero Hedge

Italy’s new interior minister Matteo Salvini said in a Saturday rally that “the good times for illegals is over – get ready to pack your bags,” adding “Countries need to start doing their job and no more smugglers should be docking in Italian ports,” a not-so veiled jab at NGOs organizing rescues at sea.

“The free ride is over”

Salvini, the leader of the conservative League party, assumed his role as Deputy Prime Minister and Minister of the Interior on Friday. He is currently on the road to rally support for his party’s candidates in the south of Italy, attending a Sunday rally in Sicily – a prime destination for most of the hundreds of thousands of migrants which have poured into Italy in recent years, mostly from Libya.

A controversial agreement between Italy’s former centre left government and authorities and militias in Libya has triggered a fall in overall arrivals of some 75 percent since the summer of 2017. But since the start of this year, Italian authorities have registered more than 13,500 arrivals.

The latest came late Friday, just hours after Salvini took his oath of office, with some 158 people, including nine children, landing in Pozzallo after being rescued by a humanitarian boat in an operation coordinated by the Italian coast guard. –France24

After being sworn in, Salvini said that he would ask experts within his ministry “how to reduce the number of arriving migrants and increase the number of expulsions.”

In order to boost deportations – of which there were only 6,500 in 2017, Salvini will need to increase the number of detention centers while signing agreements with countries which migrants originate from – most of which are not excited to have their citizens returned.

And in order to pay for his plan, Salvini is eyeing the billions of euros earmarked every year to help deal with the demands of the asylum seekers.

In 2017, the former government announced a budget of some 4.2 billion euros for migrants, of which 18 percent is for rescues at sea, 13 percent for health care, and 65 percent for migrant reception centres, which host some 170,000 people. –France24

Salvini is no fan of the migrant reception centers – which are run by cooperatives or NGO’s who are paid 25-35 euros per day for each migrant they provide lodging, clothes and other services – including psychological support and legal aid.

On Tuesday, Salvini will meet with EU interior ministers in Luxembourg to discuss the EU’s controversial “Dublin” rule, which requires that would-be refugees file for asylum in the first bloc member-state they arrive at. The rule heavily penalizes Italy, which has accepted over 700,000 refugees since 2013.

While the vast majority of migrants used to continue to northern Europe, the introduction of EU-backed processing centers in order to ensure proper identification, along with tighter border controls from France, Austria and Switzerland, have forced the migrants to remain in southern EU nations such as Greece and Italy.

But, as we tweeted prophetically last week – given Salvini’s comments – those refugees may soon find themselves “displaced” once again…

Salvini will be Italy’s new interior minister, means a lot of Italian refugees will soon be “displaced”

All of which prompted the messiah of migrants – billionaire George Soros – to play his ‘blame the Russians card once again, this time accusing Salvini of being a puppet of Putin.

Corriere Della Sera reports that the financier took to the stage of the Trento Festival of Economics to launch a strong message of criticism to the new government.

Soros said he was “very worried” about the proximity of the new government to Russia, for which the two parties that support the new executive have called for the abolition of sanctions.

Putin, “seeks to dominate Europe: it does not want to destroy it but exploit it because it has production capacity, while the Russian economy under Putin can only exploit raw materials and people”.

In a passage destined to cause controversy, Soros also asked himself whether “Putin actually finances” the League: “Italian public opinion has the right to know whether Salvini is in Putin’s paycheck”.

The Northern League member Claudio Borghi, one of the creators of the economic program of the Carroccio, replied saying that “the wind has changed for [Soros] and for all those who have earned on the death of hundreds of people.”

BUt of course, could not resist taking a swing at President Trump…calling him “a threat to the world, including America”, and arguing that the US president “does not understand the basic elements of the economy.”

The fact that Trump “got rid of all the consultants who could have prevented him from making mistakes in economics is very dangerous for the world and Europe will be the biggest victim”: it would be good that Trump “would not last long”.