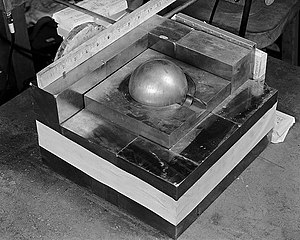 A re-creation of the experiment involved in the 1945 incident. The sphere of plutonium is surrounded by neutron-reflecting tungsten carbide blocks.

The demon core was a 6.2-kilogram (14 lb), 89-millimetre-diameter (3.5 in) subcritical mass of plutonium that was involved in two criticality accidents. It briefly went supercritical in two separate accidents at the Los Alamos laboratory in 1945 and 1946, and resulted in the acute radiation poisoning and subsequent deaths of scientists Harry Daghlian and Louis Slotin. After these incidents the spherical plutonium core was referred to as the “demon core”.
…
https://en.wikipedia.org/wiki/Demon_core