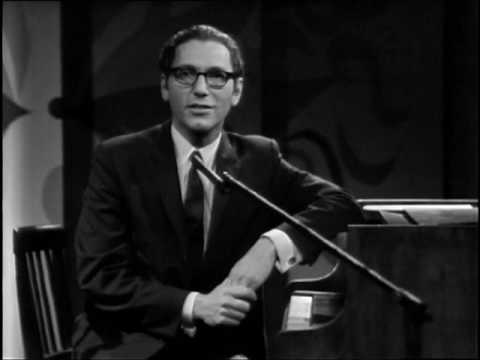 @Breaking_NewsCA @NewsAlternative #alternativenews #FreePress ALTERNATIVE NEWS CHRISTIAN CHRISTIANS GOVERNMENT MILITARY MORALITY NAVY NUCLEAR POLITICS PROPAGANDA SOCIETY USA WAR WEAPONS
August 18, 2016August 18, 2016 Q 2 Views 3 min read
Who Would Jesus Nuke? The Air Force’s banned briefing on the ethics of nuclear war
https://www.muckrock.com/news/archives/2016/aug/17/who-would-jesus-nuke-wwjn-air-force-chaplains-bann/For decades, the Vandenberg Air Force base in California gave a briefing to new missile officers on the ethics of nuclear war. Then, in 2011, the watchdog group the Military Religious Freedom Foundation (MRFF) successfully lobbied to get the program suspended. If you’re wondering what was so objectionable about an ethics lesson, the fact it was more commonly referred to as the “Jesus Loves Nukes speech” might give you a hint.

Following the controversy, MuckRock’s Michael Morisy requested a copy of the presentation from the Air Force, which it promptly released. Let’s take a look.

After a cover slide that just says “ETHICS” in size 72 font, the briefing starts off with a list of the five core ethical principals for service to the Air Force. Even without the associated lesson plan, some slides are fairly self explanatory … 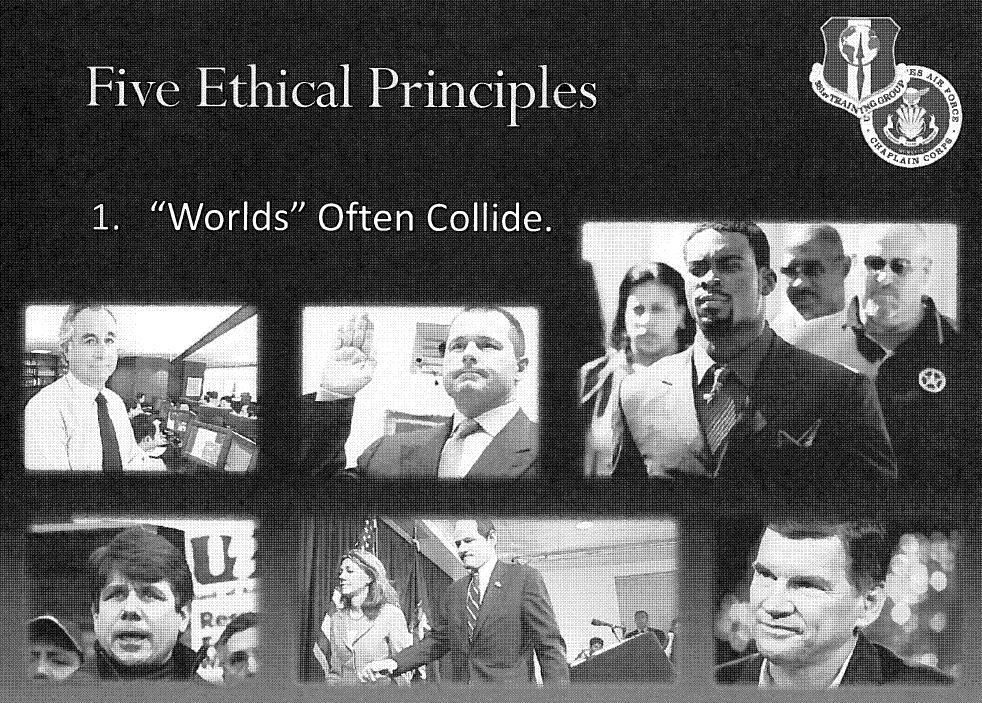 while others are, well, less so. 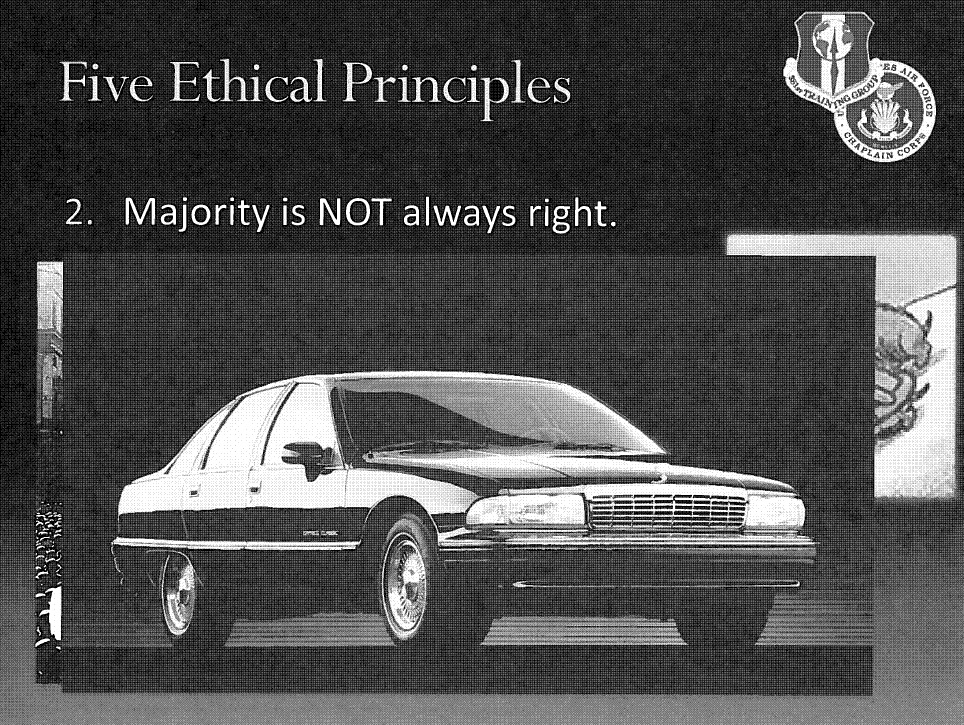 With those out of the way, the presentation then turns to the main event … 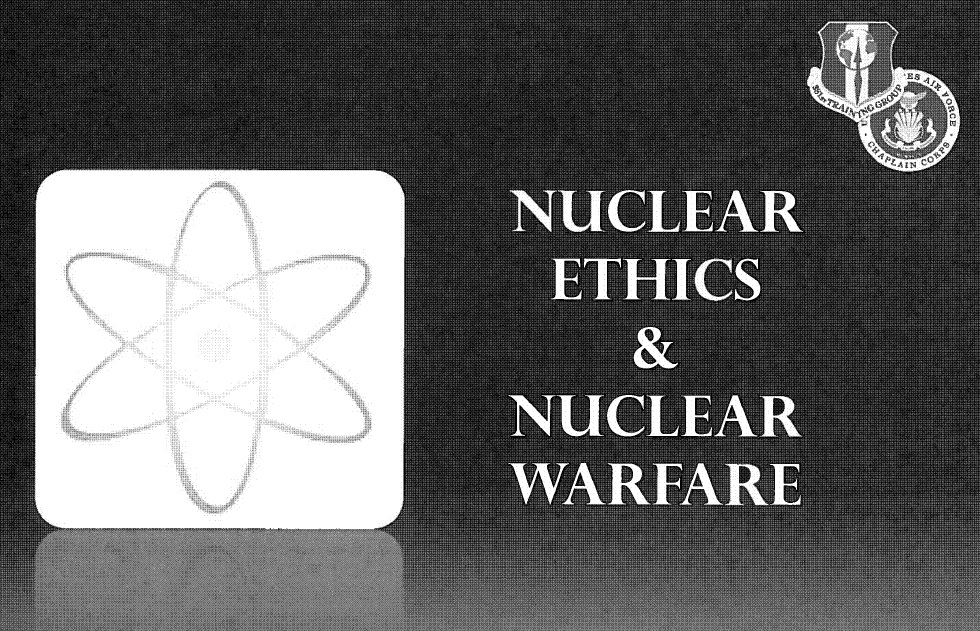 which it breaks down into four sub-categories. 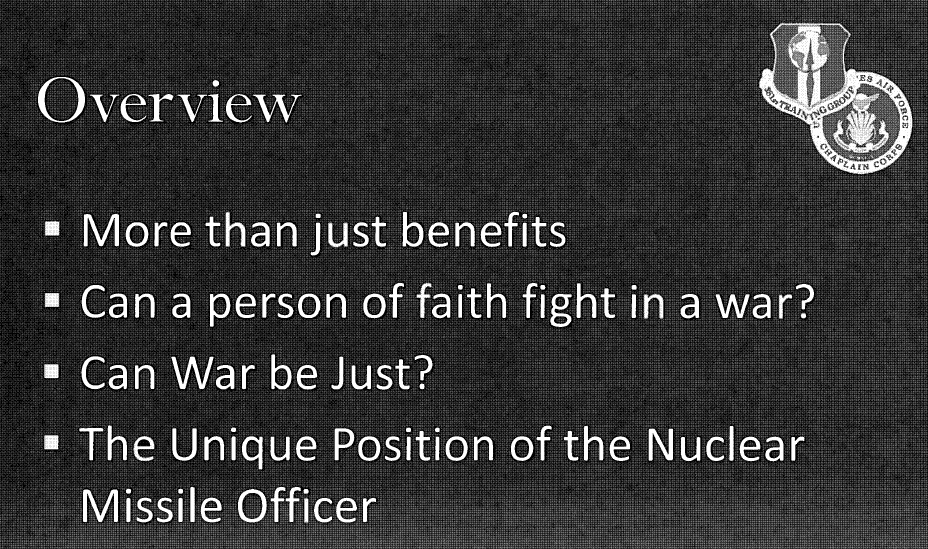 Not much time is spent on the first, which basically boils down to “Turns out, there’s more to the military than just solid pay and great healthcare.” 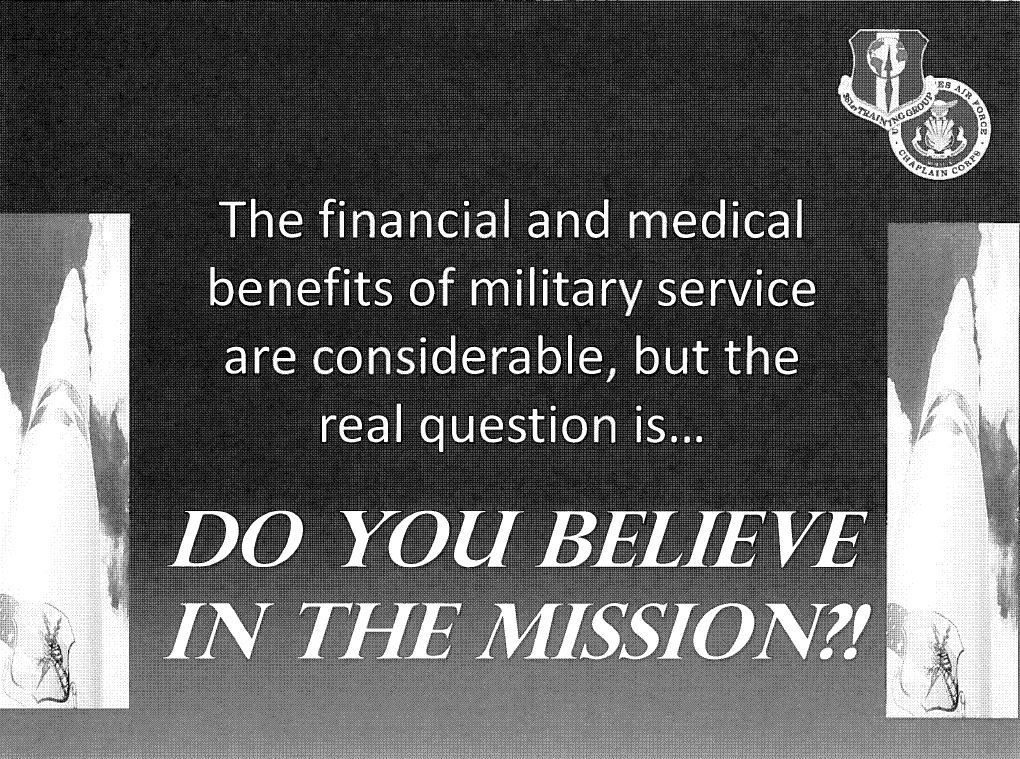 Having established that you’re not just here for the pension, the slides then go on to tackle the question “Can a Person of Faith fight in a War?” By way of answer, examples are offered of people of faith who demonstrably did fight in war, such as Joshua Chamberlain, George Washington, “Stonewall” Jackson … 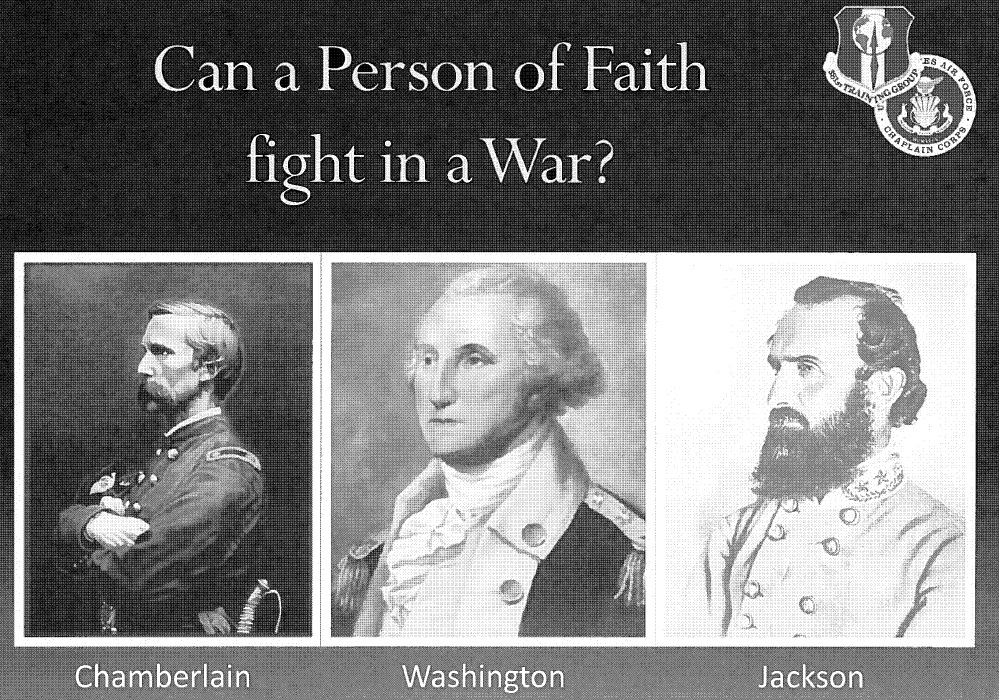 and of course, Mel Gibson. 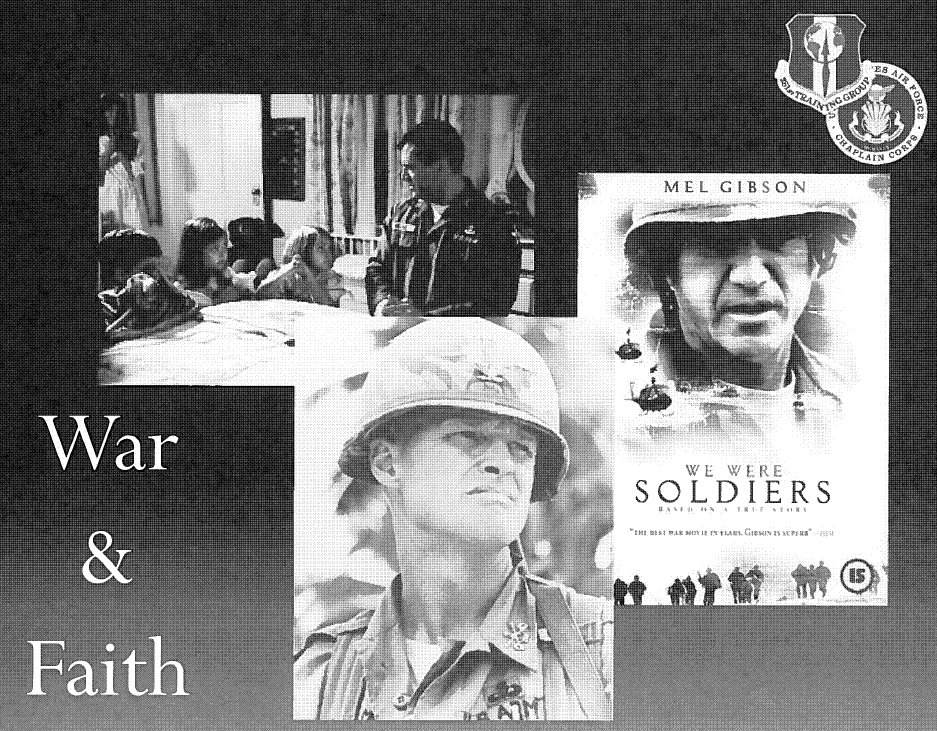 Alright, so now we know that it can be done, next up is the big one: should it be done?

Their answer, which will come as no surprise to Classics majors or people who attended Catholic school, involves this guy: 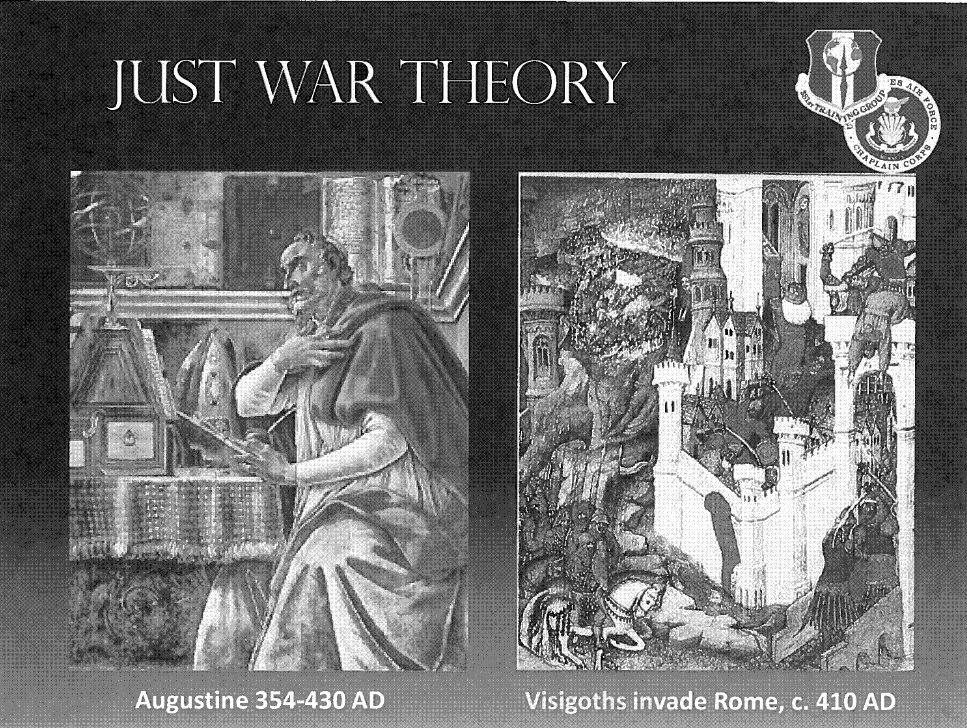 And, spoiler alert, the answer is “pretty much, yeah.” 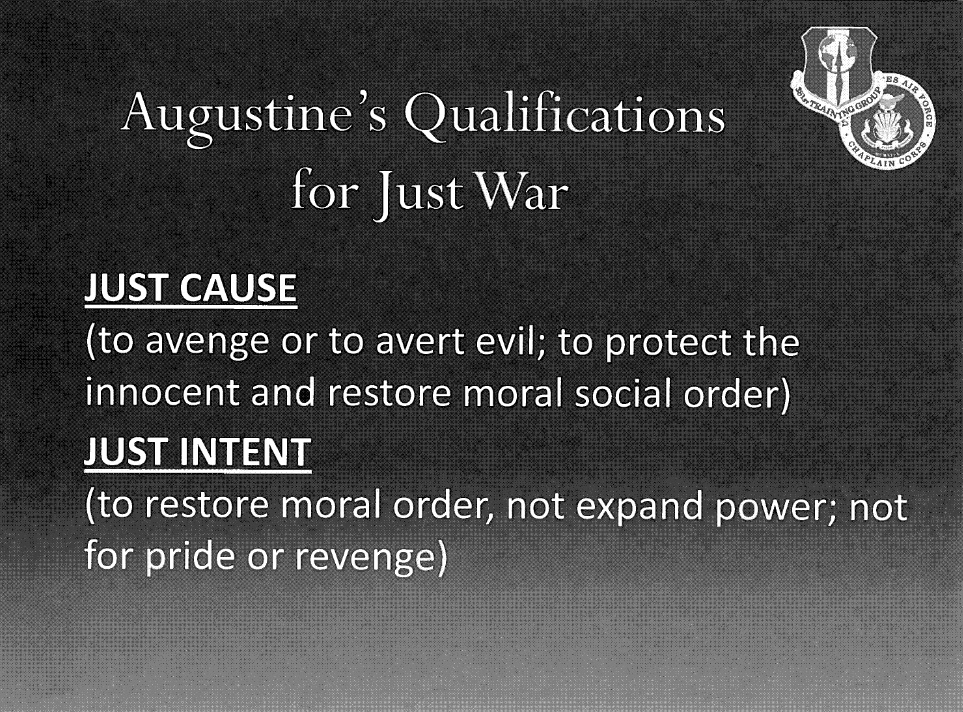 The presentation then goes on to include a diverse and inclusive list of examples of just war, ranging all the way from the Old Testament … 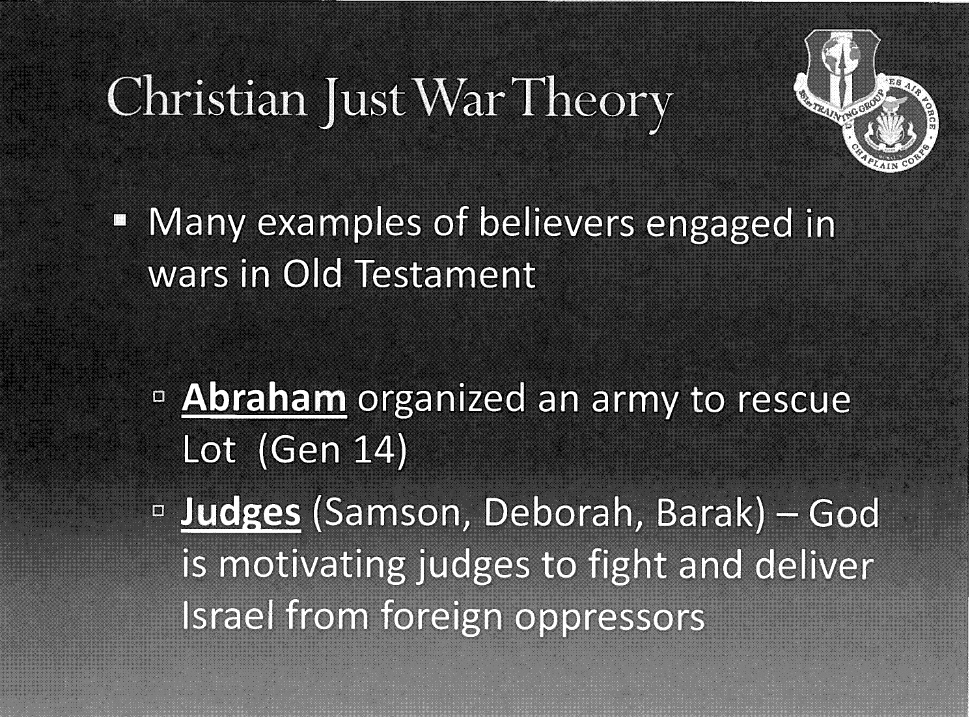 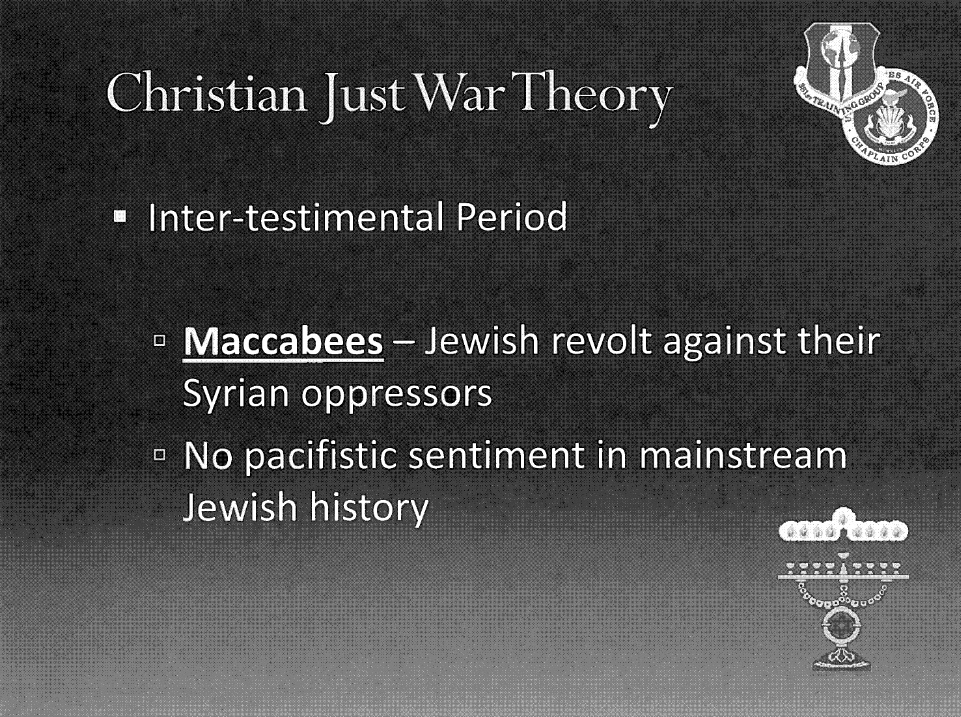 to the New Testament … 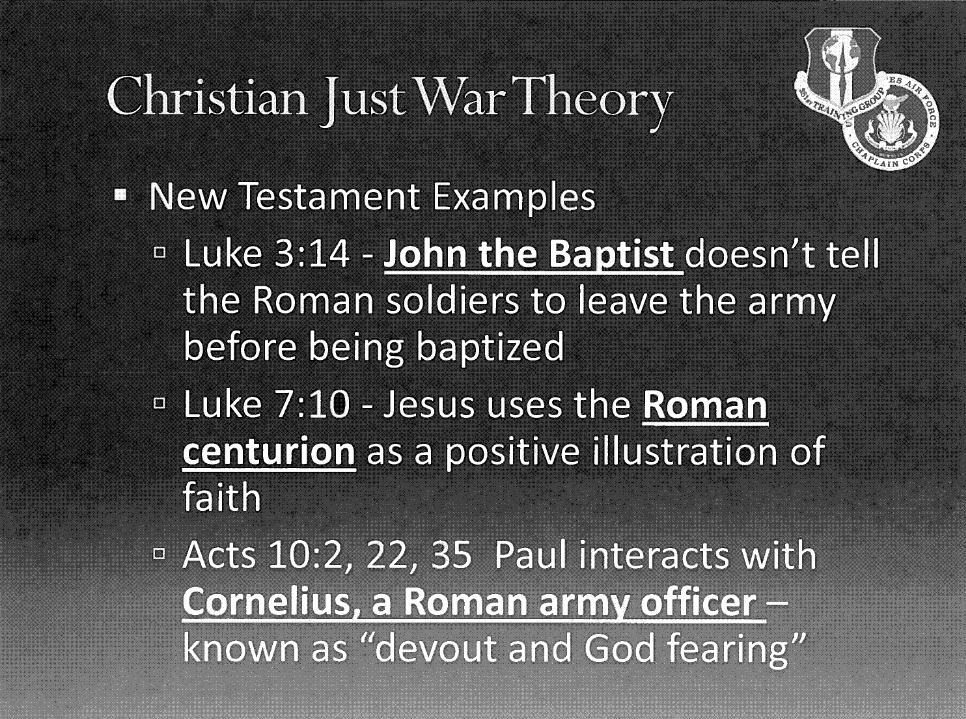 skipping right past the “live by the sword, die by the sword” and “turn the other cheek” Jesus to the cool warrior Jesus at the end. 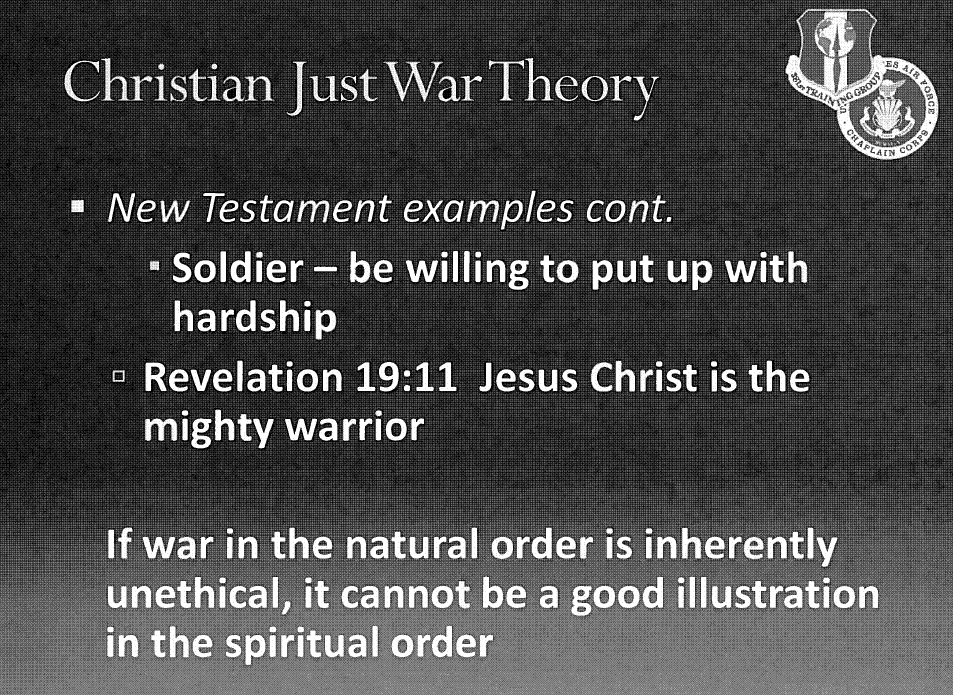 Tying it all together, we turn to the specific moral quandary of the nuclear officer of faith in a just war … 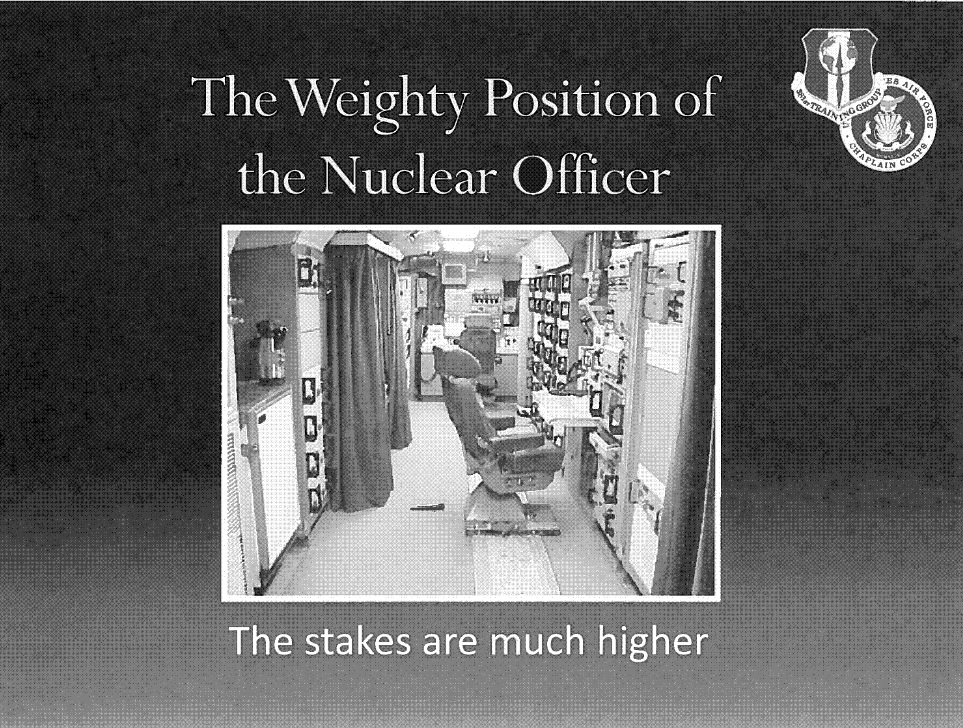 which draws from a rather obvious example. 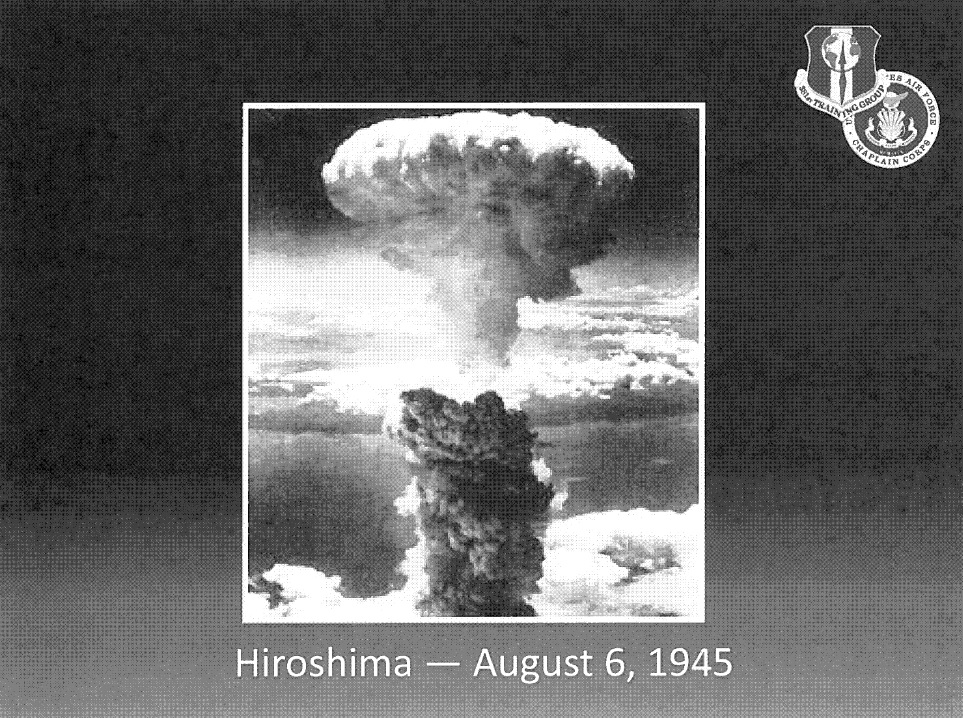 Though terrible, the presentation argues, the Hiroshima bombing actually saved lives in the long run, and, hey, they would have nuked us first. 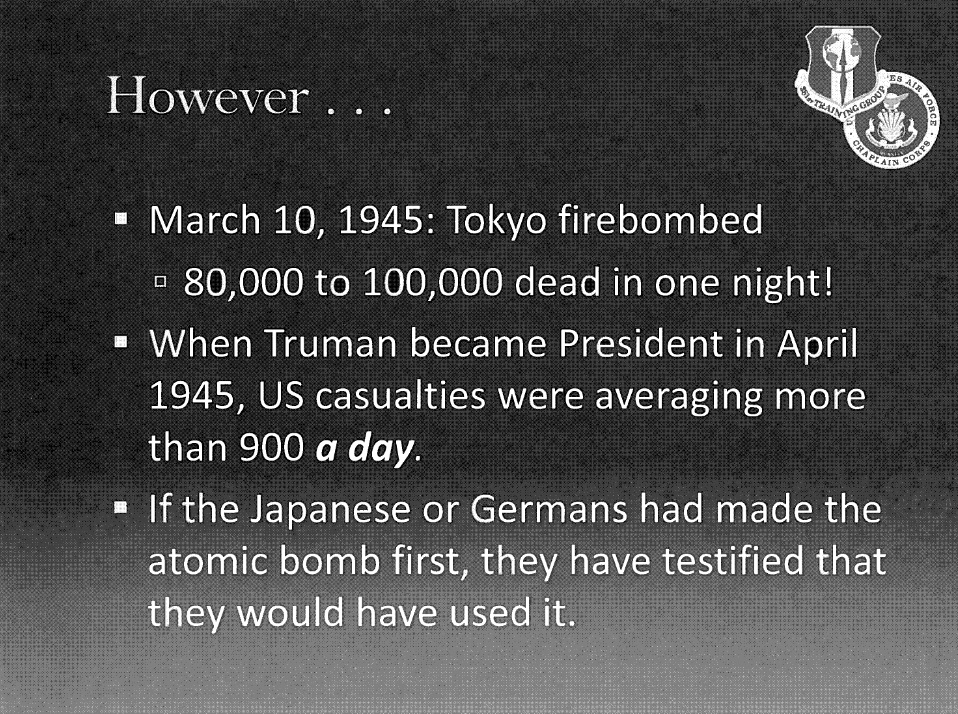 Finally, the question: could you turn the key? 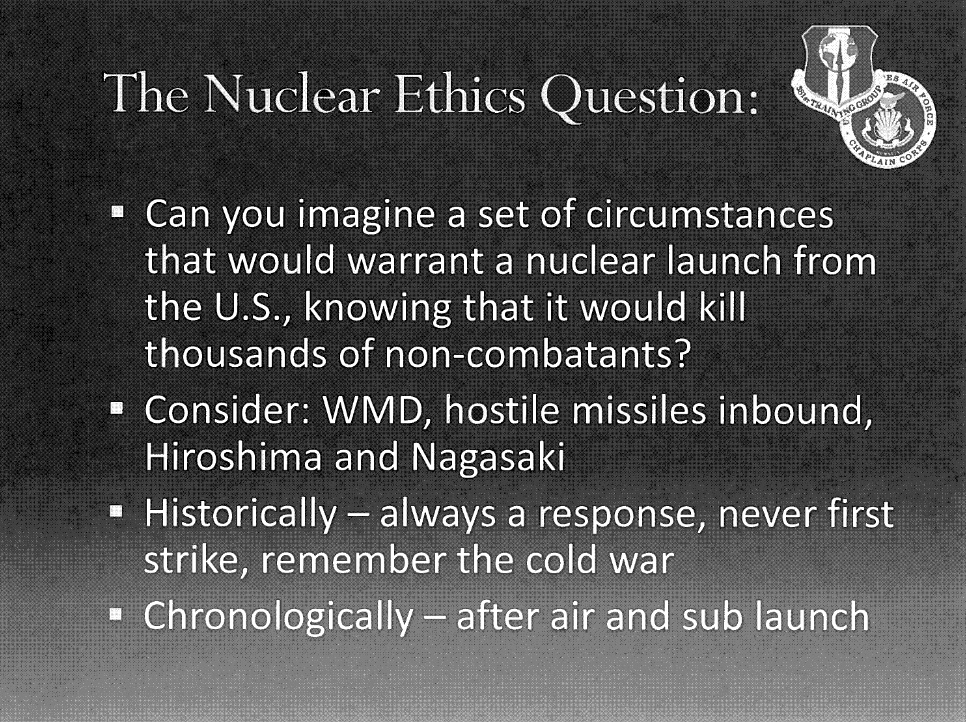 Bonus follow-up question: really, are you any less morally culpable if you don’t turn the key? Somebody else will just turn the key! 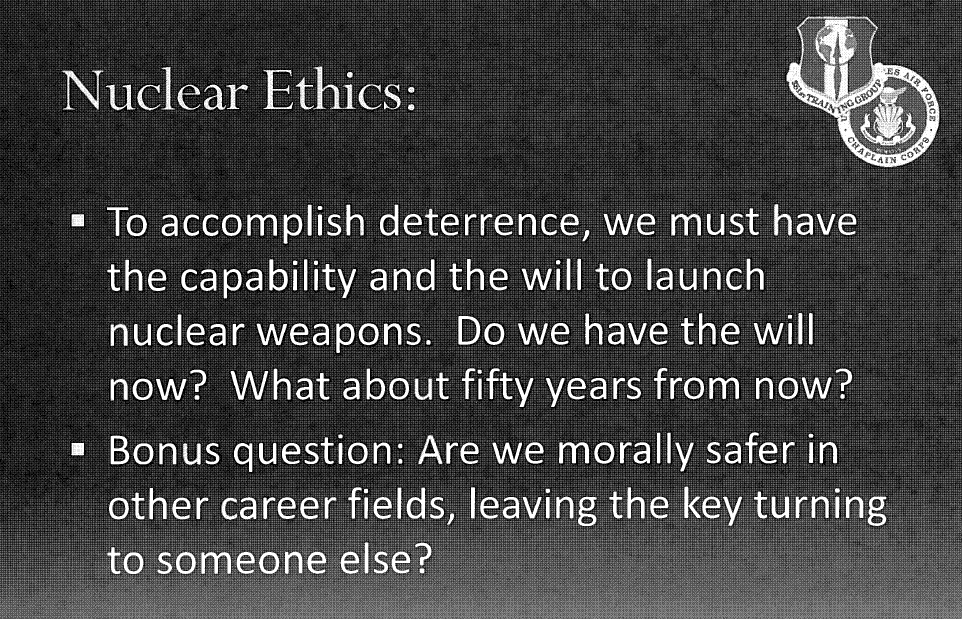 To wrap things up, the presentation appeals to no less a moral authority than an actual Nazi. 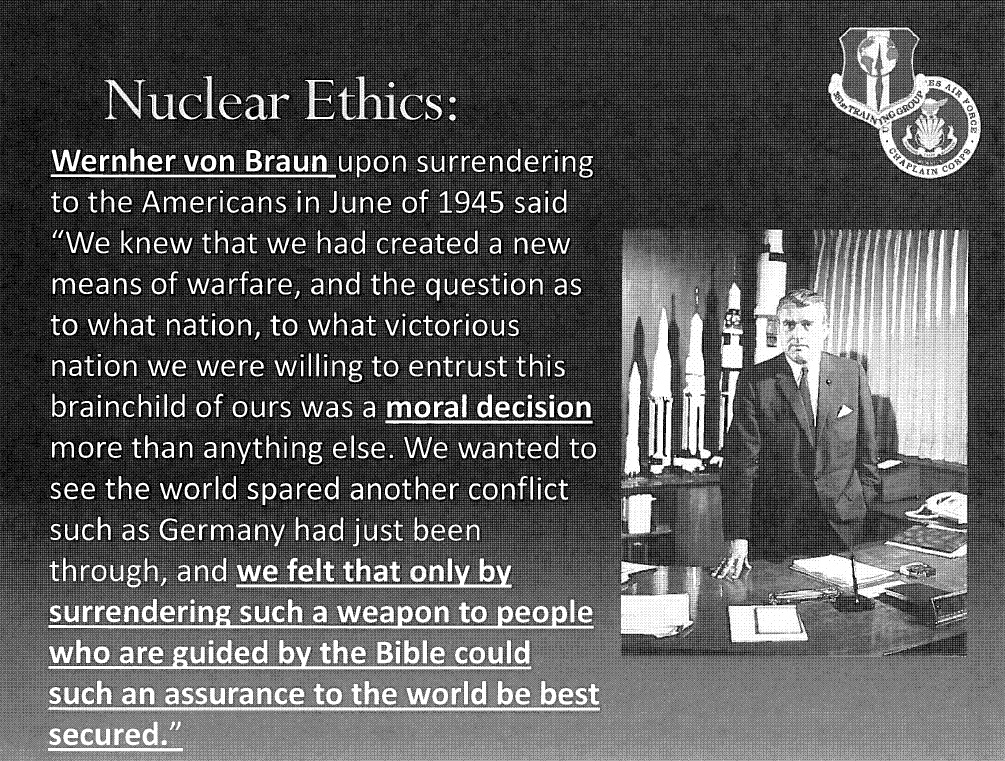 To be fair, the guy was an authority on blowing things up without losing any sleep over it.

Read the presentation embedded below or on the request page.