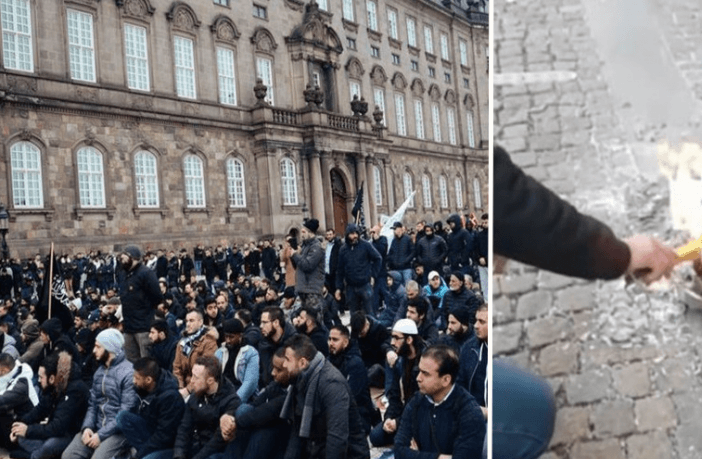 Islamists belonging to the terrorist-linked organisation Hizb ut-Tahrir held mass prayer at Christiansborg in central Copenhagen on Friday. At the same time, the immigration-critical party, Stram Kurs (Strict Course), held a counter-demonstration nearby to criticise the organisation and cook “bacon á la Quran” by burning the Quran on a grill.
Hizb ut-Tahrir’s self-proclaimed goal is to abolish democracy and introduce an Islamist sharia-led society instead.
In Russia, the organisation is banned and classified as a terrorist organisation. Germany has declared the organisation illegal due to anti-Semitism and anti-Israeli propaganda. China, Turkey, Egypt and several other Arab countries have also banned the organisation.
The organisation has also appeared in several investigations regarding terrorist attacks in Scandinavia. Truck terrorist Rakhmat Akilov who killed 5, and seriously injured 15 people in Stockholm in 2017 both liked and shared the organisation on Facebook.
At 12:30 pm on Friday, about a hundred supporters of Hizb ut-Tahrir gathered to participate in the organisation’s Friday prayer outside the Danish Parliament in protest against what they mean is an Islam-hostile climate in the country.
The organisation holds the country’s “hateful” politicians and media responsible for the development that causes attacks on Muslims.
The immigration-critical party Stram Kurs with party leader Rasmus Paludan at the forefront, reacted by simultaneously holding a counter-demonstration near the mass prayer.
Paludan told newspaper Berlingske Tidende that the party was protesting against Hizb-ut-Tahrir because they are an undemocratic organisation that strives for dominance, something which, according to Paludan, they themselves clearly state.
Several people responded to the counter-demonstration, which led to police intervention. However, a channel between demonstrators and counter-demonstrators made major clashes impossible.