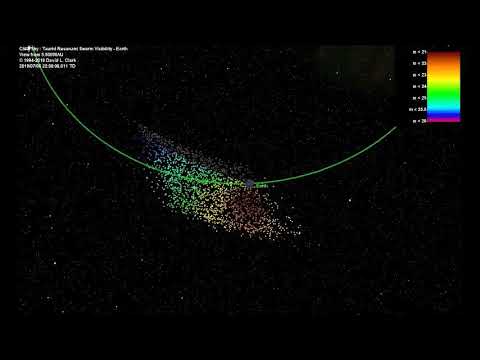 A new study from Western University posits proof to the possibility that an oncoming swarm of meteors – likened to the Loch Ness Monster and Big Foot by some extraterrestrial experts – may indeed pose an existential risk for Earth and its inhabitants. (That’s us.) When considering catalysts for catastrophic collision, there are two main sources Near Earth Objects (NEOs) like asteroids and meteoroids and interlopers from the outer solar system, which are typically comets. The Taurid swarm is a third potential source of risk that changes the probabilities of possible catastrophic impacts. Uploaded by: Communications and Public Affairs (MH)

About 30 seconds. End of June looks to be the most intense. The date/time is posted in the upper left hand corner. Easier to see full screen.