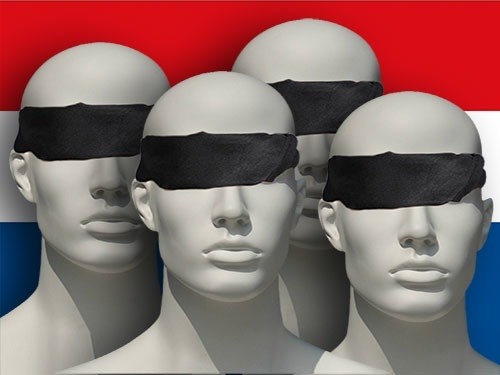 He was a leader of one of Europe’s largest and most dangerous homegrown Islamist terror groups, responsible for the 2004 slaughter of writer and filmmaker Theo van Gogh in Amsterdam. At the time of his 2006 arrest,  Dutch authorities had evidence he was planning attacks on the Dutch secret service and intelligence agency, AIVD.

Seven years into his 13-year sentence, Samir Azzouz was released from prison, despite warnings from prosecutors that the former Hofstadgroep leader remained a danger. Though an ankle monitor and economic sanctions limited any potential efforts at violence, officials also set up a “deradicalization” program for him in the hope it would help him to move beyond his terrorism past.

According to an in-depth investigation by Dutch newspaper NRC Handelsblad, Azzouz, along with fellow Hofstadgroep member Bilal Lamrani, has not only continued to encourage radicals since his release, but has been raising funds for the children and wives of ISIS fighters still living in the former Islamic State.

“If you know that children are dying from hunger, you help them,” Azzouz defended himself to the NRC in an interview. “People who don’t help, they’re the ones who should be prosecuted.”

It is true that ISIS children now being held in Syrian and Kurdish prisons are suffering. An investigation by Der Spiegel found hundreds of children desperately in need of medical attention, often malnourished, some suffering from injuries and diseases that range from scabies and pneumonia to tuberculosis.

“The children bear obvious traces of neglect,” reports Der Spiegel. “Their heads are shorn, their scalps covered in scabs. Their limbs are scrawny and when they talk, what comes out is seldom more than a faint squeak … Some children lie so still in their beds that you have to look closely to notice the slight rise and fall of their chests confirming that they are still alive.”

But the Hofstadgroep funds are not going through official channels to the hospital at the Al Hawl Kurdish refugee camp that cares for them, nor to the Kurdish Red Crescent, the International Rescue Committee, or other agencies that are helping to save these children. They are going to the families – including, for instance, the widow and children of Dutch terrorist Jermaine Walters, another Hofstadgroep member who was killed fighting for the Islamic State in 2015 – and to smugglers who promise to help women escape the Kurdish camps. According to Lamrani, donations to the fund, channeled through underground networks, have helped bring these women and families to Idlib, an area now in the hands of Hay’et Tahrir al Sham (HTS), a Syrian jihadist rebel group and former al-Qaida affiliate. Some are expected to remain there; others, Lamrani told Dutch daily the Volkskrant in a follow-up report, will continue working with smugglers in hopes of getting home to the Netherlands.

The fundraising doesn’t just take place on the street. An app group called “Support Baghouz” is largely led by someone other members call “Bilal” and who happens to have the same phone number as Bilal Lamrani, the Volkskrant reports. Screenshots of conversations show one member asking “What is Baghouz?”, to which another replies, “It’s a village in Syria where the kuffar [infidels] are killing our innocent Muslim brothers and sisters.”

Lamrani refused to tell the Volkskrant how much had been collected to date. “That’s a question the courts will have to ask should they decide to prosecute, and then I will answer,” he said. But prosecutors have not yet determined whether to press charges, apparently debating whether the project violates laws against financing terrorist groups or can be considered reasonable support to suffering families.

Yet it seems clear that, since the money is being used to smuggle women and children out of Baghouz into another terrorist-held region, “Support Baghouz” is not just a charitable effort to save innocent lives. Rather, the funds are helping jihadists and their sympathizers to remain involved in terrorist activities beyond the fall of ISIS.

This alone is disturbing. But it should also raise concerns that these two former terrorists from Europe are fundraising for terrorists abroad even after engaging in “deradicalization” programs, particularly considering that those who left Western countries to join ISIS are starting to return home. Much has been made of the potential for them to be deradicalized in prison (despite ample evidence that many jihadists were in fact first radicalized behind bars) or through social therapy programs after their release. But many dispute this expectation as unrealistic.

Indeed, Lamrani and Azzouz both engaged in such programs after prison. Azzouz was placed in the care of a “moderate” imam, under the auspices of the AIVD, with the goal of helping Azzouz to adopt a less radical version of Islam. Lamrani took a job as a youth worker, charged with teaching other Muslim young men a lesson from his own experiences, and keeping an eye out for those who were starting to radicalize. Instead, he inspired at least two of those boys to go to Syria and join the jihad there.

It is difficult to imagine that these are exceptions, particularly given the abundant evidence that deradicalization programs rarely are successful.

True, in some rare cases, as with Jermaine Walters’ brother Jason, the time spent in incarceration leads to a re-evaluation of ideas. Jason, also a former Hofstadgroep member, has since left Islam and now works as a counter-terrorism consultant to the Dutch government and others while pursuing a graduate degree in philosophy. But Jason Walters’ trajectory was not imposed on him; it was a journey he made on his own while reading philosophy and watching the film “Schindler’s List” in prison. He, too, is skeptical of such deradicalization projects.

“It is self-deceiving if you think you can impose deradicalisation,” he recently toldHolland’s NPO Radio. “I know literally no one who has changed through an intervention or program.”

Equally concerning is the fact that “Save Baghouz” remained under the government’s radar until being exposed last month by the NRC. But the fundraising began in January – three months earlier. Despite aggressive surveillance in the Netherlands, and despite close watch on the two former Hofstadgroep members, somehow intelligence failed to catch it, begging the question: what else have they missed? And further, where else are such efforts taking place, still undercover?

The rationale behind the fundraising also recalls the early years of ISIS, when foreign fighters claimed their motivation to join the caliphate was “to save the women and children.” But there was no real humanitarian motive then, nor were women and children in any way rescued. And nothing suggests any humanitarian motives or outcomes here, either. What it does do is offer a road to supporting the ISIS cause, even as the caliphate itself is falling. Call it ISIS recruitment 2.0.

Abigail R. Esman, the author, most recently, of Radical State: How Jihad Is Winning Over Democracy in the West (Praeger, 2010), is a freelance writer based in New York and the Netherlands Her next book, on domestic abuse and terrorism, will be published by Potomac Books. Follow her at @radicalstates.