Submitted by Andy Tully via OilPrice.com, 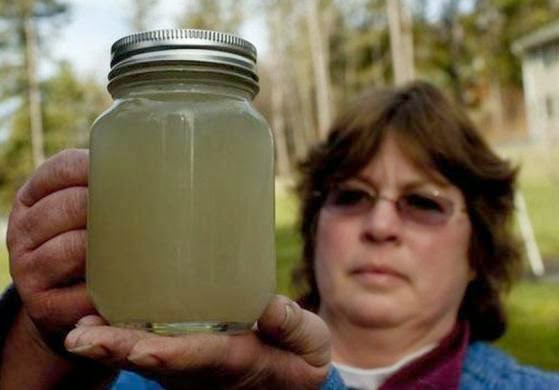 One of the biggest concerns about hydraulic fracturing, or fracking, is that the vast amount of wastewater produced by the process of extracting oil and gas from shale rock deep underground is incredibly toxic.

Most often, the wastewater is injected into disposal wells deep underground. But a process does exist to convert contaminated water into drinking water that involves running it through wastewater treatment plants and into rivers.

In an article published in Environmental Science & Technology — the journal of the American Chemical Society — a team of researchers acknowledged that the disposal of fracking wastewater is a serious challenge for energy companies that use hydraulic fracturing.

The wastewater left over from the process is not only highly radioactive, but also is contaminated with heavy metals salts known as halides, which are not suitable for consumption, according to the scientists.

Energy companies can opt to use commercial or municipal water treatment plants to purify the water, which is then released into local surface water such as rivers. The problem is that the process sometimes doesn’t remove most of the halides.

When that happens, the water is treated again, with more conventional methods such as chlorinization or ozonation. But there has been concern that this method could form toxic byproducts. The researchers decided to find out whether this was true.

They diluted samples of river water that contained fracking wastewater discharged from water treatment plants in Pennsylvania and Arkansas, simulating what happens when left-over fracking water gets into local surface waters. Then they used current methods of chlorinization and ozonation on the samples to remove the halides and determine whether the water was potable.

The results were not encouraging. The researchers found that the chlorine and ozone – used to rid samples of fracking wastewater containing as little as 0.01 percent and up to 0.1 percent of halides per volume of water – also formed an array of other toxic compounds known as “disinfection byproducts,” or DBPs.

As Climate Progress pointed out, “these chemicals — trihalomethanes, haloacetic acids, bromate, and chlorite — are formed when the disinfectants used in water treatment plants react with halides, according to the Environmental Protection Agency.” All are potentially dangerous to humans, not to mention wildlife.

The results of the study have led researchers to advise the industry not to discharge fracking wastewater into surface waters, even if it has been treated.