We turn now to a growing protest in North Dakota, where hundreds of indigenous activists have shut down construction on a multibillion-dollar pipeline project. The $3.8 billion Dakota Access pipeline is slated to carry half a million barrels of Bakken crude from North Dakota to Illinois. But members of the Standing Rock Sioux Tribe say the pipeline threatens to contaminate the Missouri River, which provides water not only for thousands of residents on the reservation, but also for millions of people living downstream. On April 1, members of the Standing Rock Sioux Tribe launched an ongoing protest camp called Sacred Stone. Since late July, when the U.S. Army Corps of Engineers approved the pipeline, at least 28 people have been arrested as they have used their bodies and horses to block construction. 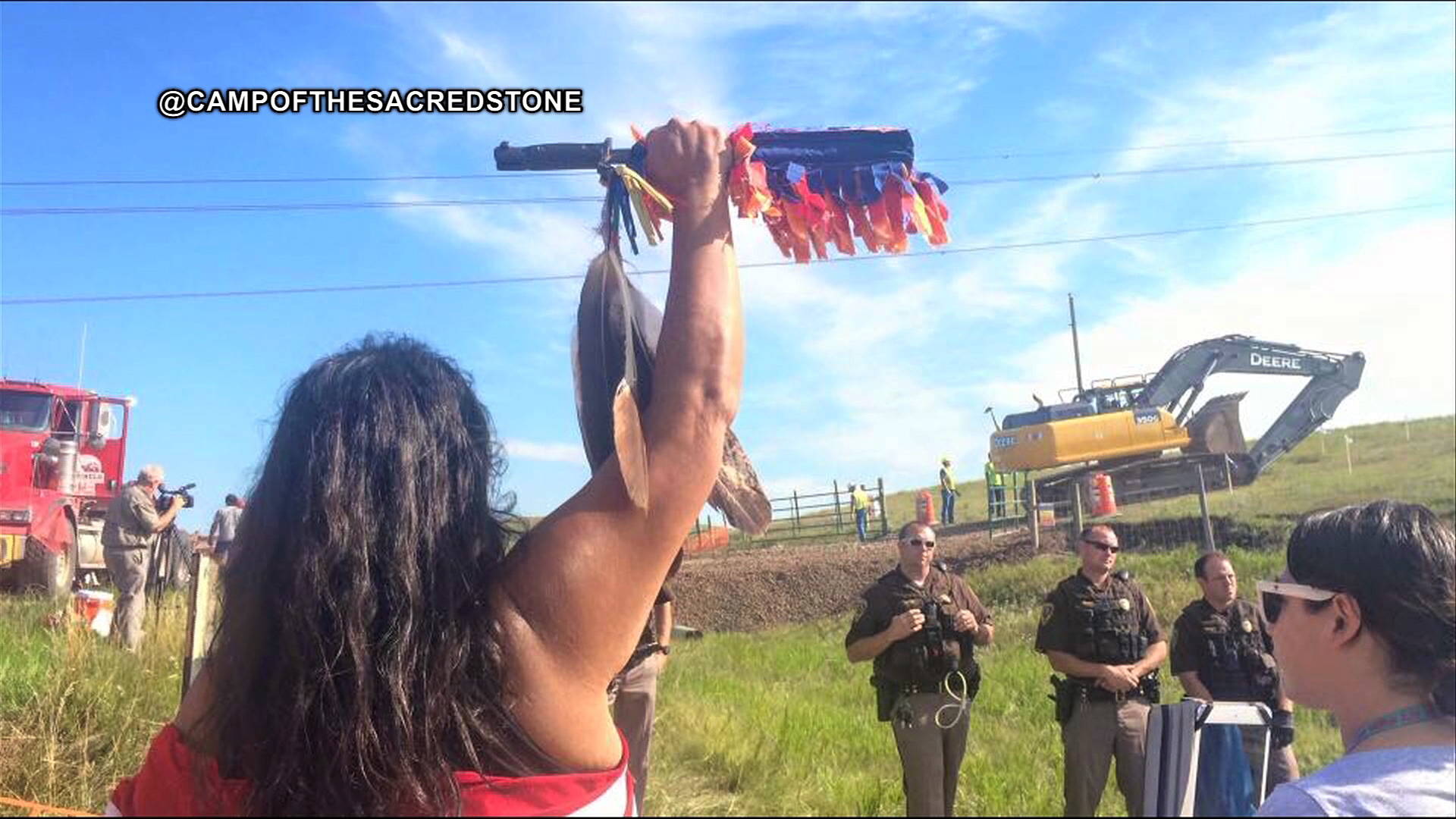 This is a rush transcript. Copy may not be in its final form.

AMY GOODMAN: We turn to a growing protest in North Dakota, where hundreds of indigenous activists have shut down construction on a multibillion-dollar pipeline project. The $3.8 billion Dakota Access pipeline is slated to carry half a million barrels of Bakken crude from North Dakota to Illinois. But members of the Standing Rock Sioux Tribe say the pipeline threatens to contaminate the Missouri River, which provides water not only for thousands of residents on the reservation, but also for millions living downstream. On April 1st, members of the Standing Rock Sioux Tribe launched an ongoing protest camp called Sacred Stone. Since late July, when U.S. Army Corps of Engineers approved the pipeline, at least 28 people have been arrested as people have used their bodies and horses to block construction. This is one of the protesters.

PROTESTER: We do this for the next seven generations. We do this for the unborn children that are coming to this world. We’re protecting the water. Our water is life. We will not let it get desecrated. They are not allowed to make no pipelines on this land.

AMY GOODMAN: For more on the pipeline, we are joined by Winona LaDuke, executive director of the group Honor the Earth and former Green Party vice-presidential nominee in ’96 and 2000. We’re also joined by Joye Braun of the Indigenous Environmental Network. She’s been at the Sacred Stone resistance camp since the first day of the protest.

Let’s begin with Winona LaDuke. What are you demanding right now? And for people who have never heard of this action, please place it for us geographically and in the bigger context of energy activism.

WINONA LADUKE: Well, hello there. You know, just to be clear, I come, actually, from northern Minnesota, and we spent four years fighting a pipeline called the Sandpiper. The pipeline is by the Enbridge company. The Enbridge company announced last week that it was going to shelve the Sandpiper and move out here to the Dakota Access, assuming that they could get a much faster way, because we have successfully resisted them for four years.

But, basically, Amy, what’s happening is that there is a replumbing of North American energy infrastructure, and there’s a whole bunch of oil interests that want to move oil, you know, from the tar sands, and in between them are indigenous people. And so, we’re looking at a 640,000-barrel-per-day pipeline, and they’re looking at—you know, now it looks like we’re looking at this other pipeline out here. But, you know, that is what’s going on.

And out here on the front lines, the question is, is, you know, at what point are we going to quit—at what point are we going to quit doing this? We’ve got a country with aging infrastructure, and they’re trying to put in new infrastructure. And we’ve got a company that has lots of structural anomalies and 800 spills, including the Kalamazoo spill—a lot of risk to a lot of people and just the wrong thing to be doing.

AMY GOODMAN: Joye Braun, can you talk about the good news you received yesterday?


JOYE BRAUN: Hínhanni wasté, everybody. Good morning. So the news that we got yesterday was that if we allowed the Dakota Access to come in and remove the bulldozers and earthmovers that they had moved in, that they would stop construction until the August 24th hearing in Washington, D.C. We said that we wanted it in writing, and we wanted it in writing sent to Standing Rock Chairman Dave Archambault and the copy sent to us on the front line.

AMY GOODMAN: Can you talk about the Sacred Stone resistance camp that you began on April 1st and what your demands are, again, for people who know nothing about what you’re doing in North Dakota?

JOYE BRAUN: So, the Sacred Stone Spirit Camp was started as an action of prayer. We had went to ceremony, and the ceremony said that we needed to do everything in prayer, and that as long as we prayed and we could bring awareness to the world, that this—that this pipeline could be stopped, that these snakes’ heads could be cut off, these “snakes” being these pipelines. And so, we went ahead and set up camp in the snow. And we’ve been there since April 1st.

AMY GOODMAN: You know, it’s very interesting that this is taking place as Baton Rouge is underwater. And so far, I think 13 people are dead. The fires in Southern California now has displaced tens of thousands of people. And the country, many parts of it, like in the Northeast, are in a heat dome right now. Winona, I want to tie this into this electoral season, this pivotal 2016 presidential election year. We’re joined here in New York by the Green Party presidential candidate, Dr. Jill Stein, as well as her running mate, who occupies the position you did in 1996 and 2000. Talk about where you see your action and whether you have faith in electoral politics now.

WINONA LADUKE: Well, greetings to you from the Green Party, my fellow Greens out there. You know, what I would say is, is that the system is crumbling all around us. And at the end of the fossil fuel era, it’s time to move towards an elegant transition. But in the final thrashings of the fossil fuel era, what you have is a lot of extreme behavior going on. You have extreme extraction. You have, you know, tar sands mining. You have blowing-up, you know, oil rigs. And you have endless, endless contamination. And at the same time, you have climate change happening.

You know, in our teachings, we talk about this as the time when you’ve got to make a choice between two paths as a country. One path is well-worn, and it’s scorched; the other is not well-worn, and it’s green. Not just talking Green Party, I’m saying that there is a path out there of enlightened practice, where instead of burning more fossil fuels, we move to renewable energy, we move to local food, we move to more community control, and we move beyond a place where corporations are natural persons under the law.

You know, I’m out here on the front lines. I’m out here in North Dakota. I live in northern Minnesota. We’ve been battling these pipelines for the past four years. You know, we have no oil where we are, but we are—you know, they propose to lay us to waste with pipelines, to get that oil to Superior and out to larger markets. So, to me, it’s a systemic set of questions. You know, it’s a telling time in American politics, but it’s really a telling time in America, that we have to make some choices on where we’re going to be going. And—

AMY GOODMAN: Winona, when you ran for office in 1996 and 2000, was that your first foray into electoral politics?

WINONA LADUKE: That was my first time. And I was listening to Jill talk about the debates, and I remember being not allowed in the debates. And I have a little picture of me and Ralph that said, you know, we couldn’t even appear in the room of the debates. We were like banned from the debates. And so, I’m like, good luck, Jill. You know, it’s preposterous.

AMY GOODMAN: Do you have advice for Ajamu Baraka, who is in the same position you are, first time electoral politics, vice-presidential nominee, like you were?

AMY GOODMAN: And, Ajamu Baraka, I wanted to ask you, your assessment of Barack Obama today?

AJAMU BARAKA: He’s been a huge failure, a disappointment for millions of people. We understand he still has a lot of support, but he had a historic opportunity to take this country in a new direction, and he—because of his ideological orientation, he ended up basically just supporting a continuation of the status quo. We have to move in a new direction. We have to have real racial justice. We have to have real justice for people who are suffering, who feel it in their bones that things are bad and will get worse. We have to have hope, real hope this time, organized hope, that the people are the only force that can really advance this revolutionary process here in this country—not any politician, but the people.

AMY GOODMAN: Does this give you renewed hope in electoral politics? I’m sure you have been very much outside of that scene.


AJAMU BARAKA: You know, when Dr. Stein asked me to consider being a part of this, I knew that the historical conditions were ripe. I knew that we had a chance to really use the electoral process to advance a people’s agenda. I knew that there was going to be a tremendous support for this Green Party push. So it’s about electoral process, but it’s about building popular power. And when Dr. Stein said the theme of this campaign was about putting power back in the hands of the people, I said, “I’m with Jill. Sign me up.”

AMY GOODMAN: We’re going to wrap up right now. I want to thank everyone for joining us. Winona LaDuke of Honor the Earth, Joye Braun of the Indigenous Environmental Network, thanks so much for being with us from North Dakota. And I want to thank Dr. Jill Stein, as well as Ajamu Baraka, the presidential and vice-presidential nominees of the Green Party.

I’ll be speaking in Seattle, Washington, at the Sheraton Seattle Hotel on Friday night, along with Kshama Sawant and Walden Bello. Check our website at democracynow.org.

The original content of this program is licensed under a Creative Commons Attribution-Noncommercial-No Derivative Works 3.0 United States License. Please attribute legal copies of this work to democracynow.org. Some of the work(s) that this program incorporates, however, may be separately licensed. For further information or additional permissions, contact us.