Rep. Steve King (R-Iowa) said Monday that President Barack Obama “would be impeached” if the nation falls into default. 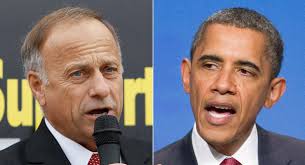 “STOP talking about default,” he wrote on Twitter. “The 1st dime of each $1 of revenue services debt. Obama would be impeached if he blocked debt payments. C C & B!”

King is among the House Republicans who voted for the so-called “Cut, Cap and Balance” plan that would introduce a constitutional amendment to require a balanced budget. The Senate last week dismissed the House bill.

King isn’t the first Republican to suggest that Obama should be impeached over the debt crisis.

Rep. Tim Scott (R-S.C.) said earlier this month it would be “an impeachable offense” for Obama to raise the debt ceiling without congressional approval. In April, former Reagan administration official Bruce Fein drafted articles of impeachment in hopes that House Republicans would introduce them. And Rep. Dennis Kucinich (D-Ohio) in March said the air attacks on Libya are impeachable acts.