Kathleen Marden was a friend of Friedman for more than 30 years and co-authored three books on UFOs with him.

“When he knew the truth, he told the truth,” she said Tuesday from her home near Orlando, Fla. “He was the original civilian investigator of the Roswell crash. Stanton was a man who did his homework. He always criticized the debunkers because they hadn’t done theirs.” 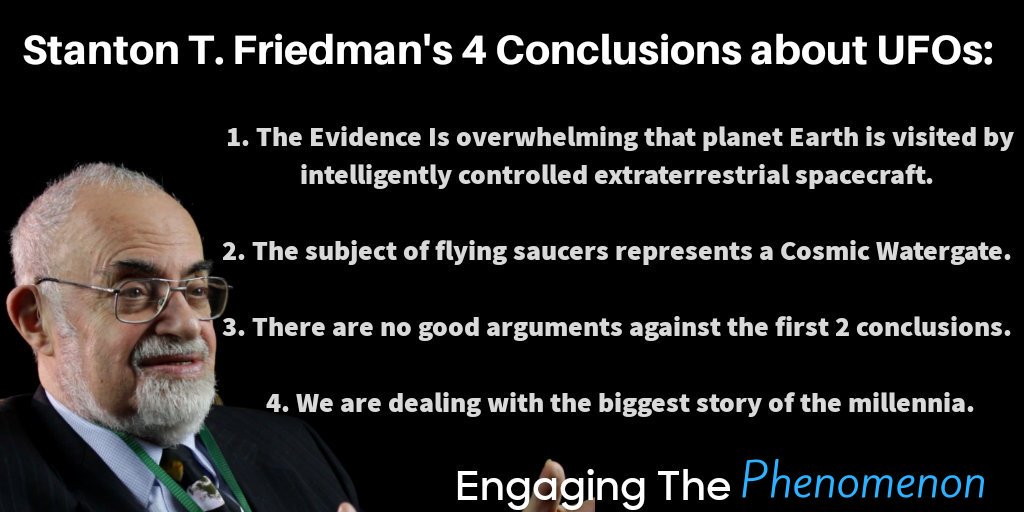 1) The evidence is overwhelming that Planet Earth is being visited by intelligently controlled extraterrestrial spacecraft. In other words, SOME UFOs are alien spacecraft. Most are not.

2) The subject of flying saucers represents a kind of Cosmic Watergate, meaning that some few people in major governments have known since July, 1947, when two crashed saucers and several alien bodies were recovered in New Mexico, that indeed SOME UFOs are ET. As noted in 1950, it’s the most classified U.S. topic.

3) None of the arguments made against conclusions One and Two by a small group of debunkers such as Carl Sagan, my University of Chicago classmate for three years, can stand up to careful scrutiny.

4) The Flying Saucer story is the biggest story of the millennium: visits to Planet Earth by aliens and the U.S. government’s cover-up of the best data (the bodies and wreckage) for over fifty years.