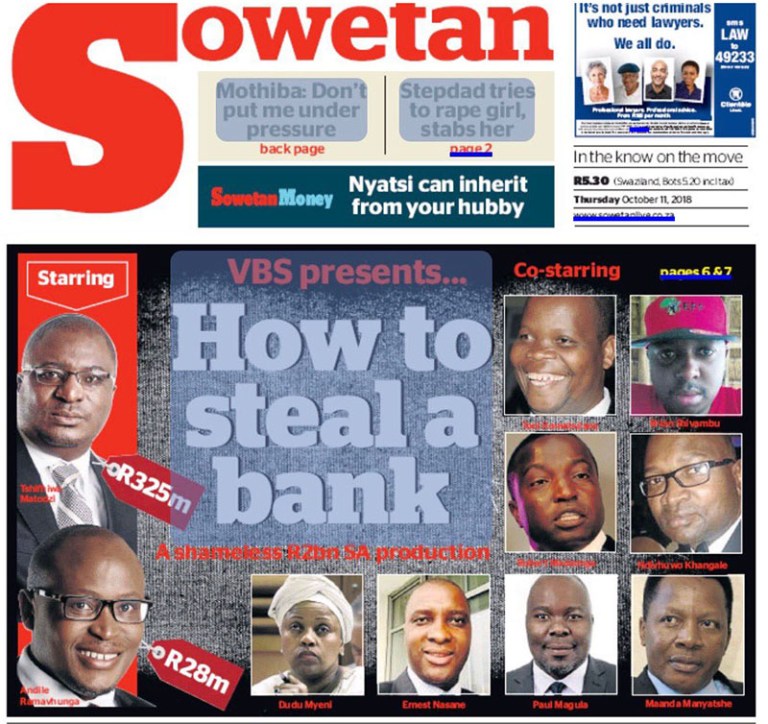 The latest developments in the VBS saga are contained in an explosive report by advocate Terry Motau, who was appointed to head an investigation into the bank’s collapse. The report is titled “The great bank heist”.

“The evidence presented in the report is not a reflection of either the guilt or innocence of any party, as not all parties have been given an opportunity to respond to the evidence,” the South African Reserve Bank said in a statement on Wednesday : https://www.news24.com/SouthAfrica/News/explosive-report-into-vbs-bank-reveals-large-scale-looting-20181010

“By fraudulent means, the looting of VBS was hidden from view and was allowed to continue and indeed, escalate… These frauds misled the Registrar [of Banks] into believing that VBS was financially sound position whereas in truth its liabilities exceeded its assets by about R180-million and it was thus, hopelessly insolvent as at 31 March 2017.”

VBS Mutual Bank—lauded as the first bank in South Africa to be totally owned and managed by Africans—has collapsed after its owners stole all the cash and bribed government and local government officials into depositing money in the operation, an official inquiry set up by the South African Reserve Bank (SARB) has found.

According to the official report issued by the SARB, titled “The Great Bank Heist: Investigator’s Report to the Prudential Society,” the African owners at the VBS Mutual Bank “made away with almost R2 billion” in what it described as “a single criminal enterprise.”

VBS Mutual Bank became a mutual bank in 1992, and was listed on the South African Stock Exchange in 2017. It ran into what media called “liquidity problems” early in 2018, and was placed under curatorship in March this year.

Other cash went to local government officials in at least 15 regions as payments for switching banking facilities to the African-owned bank. Among those implicated are the African National Congress’s deputy chairman for the northern Limpopo province, Florence Radzilani, and that organization’s regional treasurer, Danny Msiza.