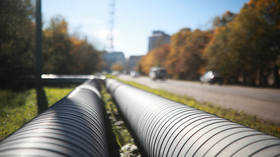 The country cannot afford to lose its major supplier

Slovakia will pay for Russian natural gas in rubles if that’s what it takes to keep the commodity flowing, Slovak Economy Minister Richard Sulik has said on national television.

“If there is a condition to pay in rubles, then we will pay in rubles,” Sulik said. He stressed that Russian imports account for roughly 85% of all Slovakian gas supplies, so the country’s authorities will remain pragmatic on the issue.

“We cannot be cut off from gas,” Sulik emphasized, urging the rest of Europe to jointly seek a solution.

Nearly all of the countries of the European Union, of which Slovakia is a member, slapped Russia with economic sanctions over the past month, jeopardizing Russia’s ability to receive payments from trade partners in the European currency. In response, Russian President Vladimir Putin last week signed a decree introducing a new ruble gas payment mechanism.

Although it is viewed by some as going against existing gas contracts, the mechanism does not imply a change of the currency of payment. It enables buyers to open ruble accounts with Russian Gazprombank to facilitate the transfer of European companies’ payments to Russian suppliers.

According to Putin’s press secretary Dmitry Peskov, “de facto nothing will change for European companies… They will pay, as they used to, in euro, the same currency that is indicated in the contracts,” but the seller, Russia’s major gas exporter Gazprom, will be able to receive the funds in Russia’s national currency. Despite extensive explanations, however, many Russian buyers found themselves puzzled by the change. The initial reaction was mostly one of protest, with countries claiming they would not pay for gas in rubles. However, it appears that this will not be necessary at all.

The Slovakian economy minister, along with a number of other European politicians, said the situation calls for diversification of suppliers. But he said this may take years, while Slovakia has only two months to solve the current problem with fuel purchases.