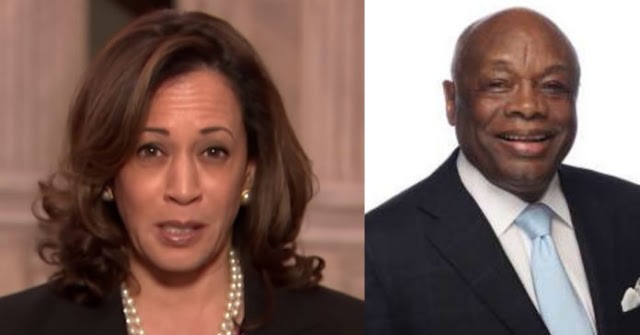 Kamala Harris knew this day would come, running for president exposes all of your skeletons and now we are about to see what she is made of politically.
In the #metoo movement, what will the liberals make of Kamala saying ‘yes’ to get the promotion rather than no?

If they will rake the men over the coals for abusing power over women in the workplace, what will they do to the women who went along for the sake of their careers? Surely the liberals would never allow such hypocrisy among their ranks?
They will have to choose because an ex of Kamala Harris, the notoriously corrupt former California politician Willie Brown, just admitted the old rumors were in fact true.

From The Free Beacon: Former San Francisco mayor Willie Brown broke his silence on his relationship with Democratic senator Kamala Harris on Saturday, admitting in his weekly column that he used his powerful post to boost her young career when they dated.

Brown, who was openly in an extramarital relationship with Harris when he was speaker of the California State Assembly and running for mayor, had avoided commenting on his relationship with Harris since she announced her run for president a week ago. Harris has also managed to avoid addressing the role Brown played in the early stages of her political career.

In his weekly San Francisco Chronicle column, however, Brown referred to it as the “elephant in the room” and acknowledged that he used his position to help her career.

The two positions Brown appointed Harris to—on the Unemployment Insurance Appeals Board and the California Medical Assistance Commission—paid handsomely. SF Weekly reported back in 2003 that the two positions earned her more than $400,000 over five years.
Harris defended her decision to take the posts Brown got for her in her 2003 interview with SF Weekly despite her lack of experience.
“Whether you agree or disagree with the system, I did the work,” she said. “I brought a level of life knowledge and common sense to the jobs.”

Brown also reportedly gifted Harris with a BMW in 1994. He is 31 years older than Harris.
Willie wrote:
“I’ve been peppered with calls from the national media about my “relationship” with Kamala Harris, most of which I have not returned.

Yes, we dated. It was more than 20 years ago. Yes, I may have influenced her career by appointing her to two state commissions when I was Assembly speaker.

And I certainly helped with her first race for district attorney in San Francisco. I have also helped the careers of House Speaker Nancy Pelosi, Gov. Gavin Newsom, Sen. Dianne Feinstein and a host of other politicians.

The difference is that Harris is the only one who, after I helped her, sent word that I would be indicted if I “so much as jaywalked” while she was D.A.