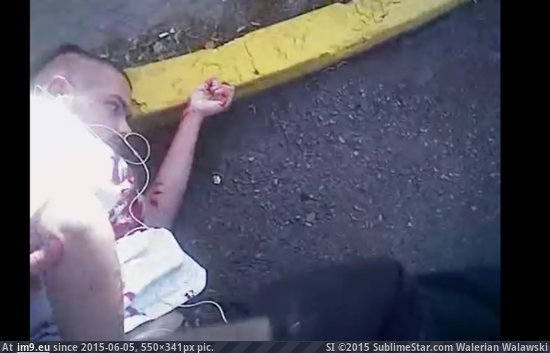 On August 11, 2014, Dillon Taylor walked out of a local Salt Lake City, Utah, convenience store minding his own business. He wasn’t armed. He wasn’t committing a crime. He was listening to music on his headphones, probably in his own world.

Just two days after Officer Darren Wilson shot and killed an unarmed Mike Brown in Ferguson, Taylor would soon face a similar fate at the hands of a local officer. And on October 1, the district attorney in Salt Lake City, Sim Gill,ruled that the killing of 20-year-old Taylor was justified. Even in his determination, though, he stated that “Taylor’s shooting was justified not because he posed an actual threat, but because (Officer) Cruz reasonably perceived a threat.”

Now that the full video has been released, it’s disturbingly clear that nothing about this police shooting was justified. Nothing at all.

At 0:17, Officer Bron Cruz gets out of his vehicle. You will notice people confused by his presence.

At 0:22, Officer Cruz walks past two men who were friends with Dillon Taylor.

At 0:24, Officer Cruz walks behind Taylor, who has on a white T-shirt and is listening to music.

At 0:33, we see the officer has his gun drawn and is yelling at Taylor, who’s holding his sagging pants up and does not appear to hear Cruz.

At 0:36, the officer shoots Taylor. It would be fatal.

Starting at 0:41, you will notice the headphone cord coming out of Taylor’s pocket.

At 0:48, you will see that the headphones were clearly going up to Taylor’s ears.

At 0:52, the officer asks Dillon to “give me your hands,” but Taylor is already near death. His friends begin screaming and crying in the background.

At 1:03, the officer handcuffs Taylor.

At 1:48, the officer turns Taylor over, the headphones are visible, and the officer states “it’s clear”—meaning that Taylor was actually unarmed.

At 2:54, the officer turns Taylor completely over, keeping him handcuffed, and begins talking to him and trying to get him to talk. Taylor appears nearly dead and is completely covered in blood.

At 4:56, the officer is rummaging through Taylor’s pockets instead of providing any first aid.

View the video below.