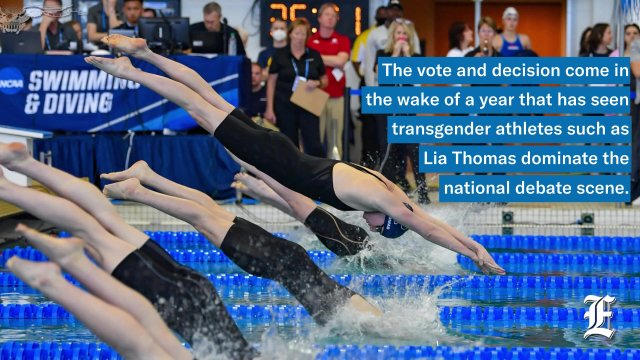 College graduates booed a Wyoming senator giving a commencement address after she referenced the “existence of two sexes.”

GOP Sen. Cynthia Lummis found herself on the receiving end of University of Wyoming students’ ire as she tried to make the case that government overreach has led legislators to think the government is the granter, rather than the protector, of rights and truths.

“There are those in government who believe not that the creator endowed us with inalienable rights … but that government created those rights,” Lummis said in the speech. “And the government should redefine those rights, including our rights to freedom of speech, religion, property, assembly, and to keep and bear arms. Even fundamental scientific truths — such as the existence of two sexes, male and female — are subject to challenge these days.”

Students weren’t happy with the senator’s comments and kept up a stream of noise, prompting Lummis to “challenge” the students further.

“I’m not making a comment on the fact that there are people who transition between sexes,” Lummis said over the jeers before getting back to her prepared remarks. “I personally question how, under our Constitution, we can forbid in-person worship services during a pandemic while labeling liquor stores as essential and keeping them open.”

In a statement to Oil City News on Sunday, a spokesperson for Lummis said the senator apologizes to anyone who felt “un-welcomed or disrespected” by her comments, though she didn’t apologize for the comments themselves.

“My reference to the existence of two sexes was intended to highlight the times in which we find ourselves, times in which the metric of biological sex is under debate with potential implications for the shared Wyoming value of equality,” the statement reads. “I share the fundamental belief that women and men are equal, but also acknowledge that there are biological differences and circumstances in which these differences need to be recognized.”