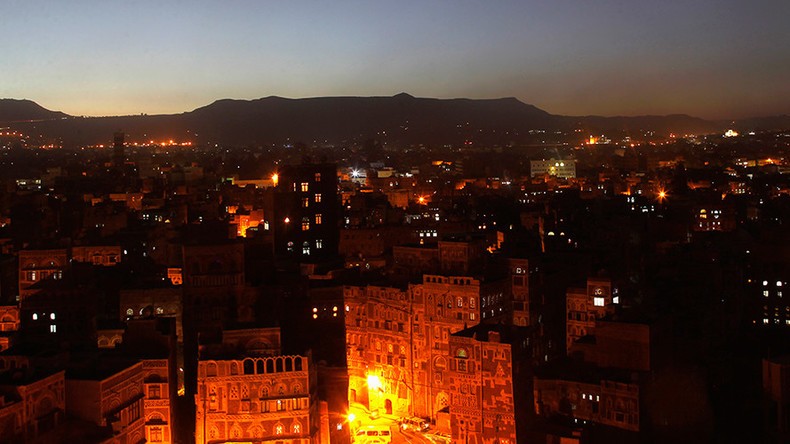 The defense ministry building in Yemen’s capital, Sana’a has been targeted in at least two airstrikes by Saudi-led coalition warplanes, local media and eyewitnesses report. There are fears of civilian casualties as nearby buildings were also reportedly hit.

“There were two to three strikes on the Ministry of Defense,” local journalist Hassain Abukhaiti told RT, confirming that Saudi-led planes are targeting the Yemeni capital. He said there are reports that “one of the missiles hit a house” near the military building. “A family was living there,” the journalist said. “The house has been destroyed. It is very likely that the entire family was killed.”

About a dozen houses were hit in the bombardment, an RT Arabic correspondent reports, adding, that “the raids also targeted an economic institution next to the Ministry of Defense in the densely populated area of old Sana’a.”

At least eight people were reportedly injured and had been transferred to a local hospital. Social media reports indicate the attack resulted in casualties, but that information, though, could not be independently verified. One of the rockets allegedly landed near a “disabled [disability] center,” Abukhaiti said. He added that locals were trying to pull victims from the rubble, but some were afraid to help in rescue efforts fearing more strikes.

This is the second time Riyadh has bombed Sana’a in less than a week. The Saudi-led coalition attacked the defense ministry building in the Yemeni capital last Saturday, after Saudi Arabia’s air defense intercepted a ballistic missile fired from Yemen towards the King Khalid Airport in Riyadh. On Friday, a US Air Force commander said the ballistic missile was likely supplied by Iran and bore “Iranian markings.” While Tehran has firmly denied its involvement, Saudi Arabia still holds Iran responsible for the attack.

In a statement following Saturday’s attack, the Saudi-led coalition accused Iran of supplying the Houthis with the missile used by the rebels, warning its arch-rival that supplying the missile could be “considered as an act of war.”

“Iran’s role and its direct command of its Houthi proxy in this matter constitutes a clear act of aggression that targets neighboring countries, and threatens peace and security in the region and globally,” the coalition statement said. “The coalition command also affirms that the kingdom reserves its right to respond to Iran in the appropriate time and manner.”

US President Donald Trump and French President Emmanuel Macron have sided with Riyadh on pinning the blame on Iran.

“Let us say things as they are: the man is detained in Saudi Arabia and forbidden until this moment from returning to Lebanon,” Nasrallah said in a televised address. “It is clear that Saudi Arabia and Saudi officials have declared war on Lebanon and on Hezbollah in Lebanon.”