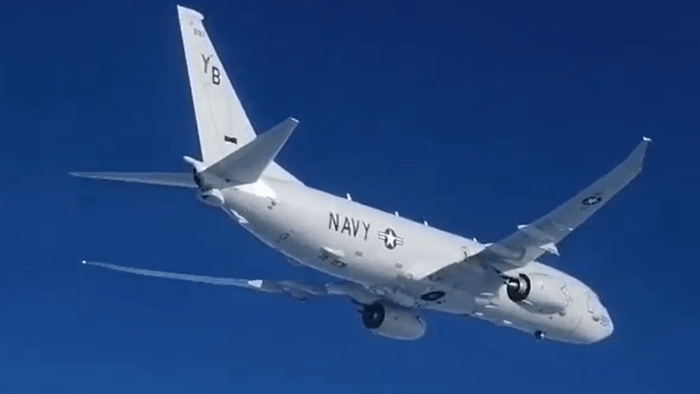 For the third consecutive day there’s been a Russia and NATO aircraft intercept incident over the Black Sea, coming at a moment the region is on edge over the alleged Russian troop build-up near Ukraine.

On Friday Russia scrambled a fighter jet to intercept and escort a US military spy over the Black Sea, Russia’s Defense Ministry said, as reported in Reuters. There’s been a series of recent encounters over the region, but also in the Sea of Azov as Moscow is now accusing Ukraine’s Navy of “provocations” after a Thursday incident which saw an unannounced warship head toward the Kerch Strait before turning back.

According to early reports, an Su-30 fighter came near a US Navy P-8A Poseidon maritime patrol/ASW aircraft, which appeared in video quickly released by Russia’s defense ministry.

To identify the air target and prevent it from breaching the Russian state border, a Su-30 fighter from the air defence forces of the Southern Military District was scrambled. The crew of the Russian fighter identified the air target as a US Navy reconnaissance aircraft P-8A and escorted it over the waters of the Black Sea,” the National Defense Control Centre (NDCC) said.

Since last week the Kremlin has been angry over what it says is a pattern of unsafe US spy plane maneuvers over the Black Sea, which also threatens civilian aviation. An Aeroflot fight from Israel to Moscow reportedly had to drastically reduce altitude when an American spy plane came too close without warning or proper communications.

“Increased U.S. and NATO warplanes activity near Russian borders creates risks of dangerous incidents for civilian aviation,” Russian Foreign Ministry spokeswoman Maria Zakharova said in a written statement Sunday. “If this time a catastrophe over the Black sea was avoided, this doesn’t mean U.S. and NATO could risk people’s lives in the future without punishment,” Zakharova added.

On Thursday a pair of NATO jets were shadowed by Russian fighters over the Black Sea, later identified as French Rafale and Mirage-2000 jets, which were being accompanied by a French Air Force C-135 refueling aircraft. The Kremlin said they were escorted away from Russian airspace.