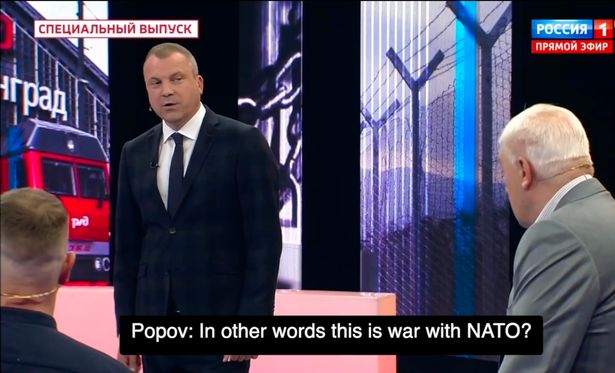 Retired Lieutenant-General Evgeny Buzhinsky lashed out at British general Sir Patrick Sanders, saying: “The island will vanish, so I’ve no idea where he or his descendants will live”

The UK will “physically cease to exist” if the new standoff in Lithuania triggers a nuclear World War 3, warned a retired Russian general and military expert.

He lashed out at British general Sir Patrick Sanders, who took command of the UK’s land forces this week with a rallying call to troops to prepare to fight and beat Russian forces in a World War 3.

“He doesn’t understand that as a result of the Third World War Britain will physically cease to exist,” said Buzhinsky.

“The island will vanish, so I’ve no idea where he or his descendants will live.”

“He doesn’t understand that as a result of the Third World War Britain will physically cease to exist,” said Buzhinsky (pictured with TV host Yevgeny Popov) (

In his message to troops, General Sanders had said: “I am the first Chief of the General Staff since 1941 to take command of the Army in the shadow of a land war in Europe involving a continental power…

“The scale of the enduring threat from Russia shows we’ve entered a new era of insecurity. It is my singular duty to make our Army as lethal and effective as it can be. The time is now and the opportunity is ours to seize.”

Buzhinsky warned that alongside the war in Ukraine, the Kaliningrad situation is “deeply serious”, and claimed the West had ulterior motives.

He urged Vladimir Putin to respond immediately by sending nuclear weapons to Kaliningrad, former the Prussian outpost of Königsberg and the country’s most westerly territory, which is wedged between Lithuania and Poland, and is also the headquarters of the Kremlin’s Baltic Fleet.

“This is a long game to push us out from the Baltic Sea, an attempt to block and cut Kaliningrad off, and finally to take it away from us,” he claimed.

The West intended to “block Kaliningrad economically, completely, until our people howl from destitution”.

Putin should “disavow the 1991 recognition of Lithuania, disavow the agreement with the EU on Lithuania, including on their borders, then switch Lithuania off from energy”, he said.

“And then finally we must take military measures.”