Skip to content
Uncategorized
October 29, 2018 Q 6 Views 0 min read
Russia is going to try-missed missiles in the sea outside central Norway, while the NATO exercise:
Russia to conduct naval missile drills in the same area Trident Juncture is ongoing 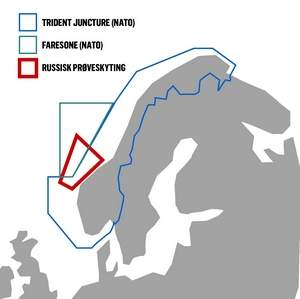 “Russia plans to carry out a military exercise right
outside Norwegian territorial waters. The exercise will
involve missile shooting – and is scheduled in the midst
of the ongoing Nato exercise Trident Juncture.”

The Russian exercise will take place in the sea just
outside the Møre Coast, a short distance from the Norwegian
cities Kristiansund, Molde and Ålesund, and in an area
with several Norwegian offshore installations.

It was Avinor who received a message from Russian
authorities Friday. The message from the Russian Central
Air Traffic Authority states: