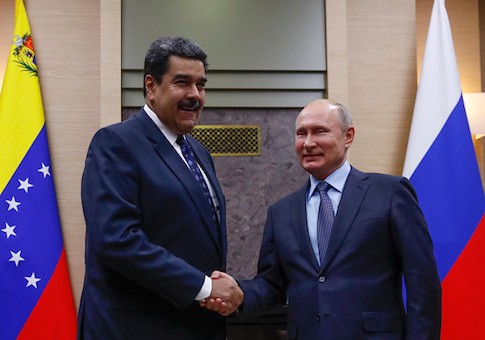 Russia is deploying nuclear-capable Tu-160 Blackjack bombers to Venezuela as part of an increasingly provocative pattern of bomber training flights.

Russia is deploying nuclear-capable Tu-160 Blackjack bombers to Venezuela this week as part of an increasingly provocative pattern of bomber training flights, according to American defense officials.

At least two Blackjacks will fly from a strategic forces air base in Russia to Venezuela as part of a series of training exercises that will include long-range refueling, said officials familiar with Russian plans for the flight.

The bomber foray to South America will be Russia’s seventh training flight for Blackjack bombers in the past three months.

Mark Schneider, a former Pentagon official and specialist on the Russian military, said Tu-160 flights are unusual and increasing.

“There were six announced Tu-160 flights of the ‘provocative’ type during the last three months, which is a lot,” Schneider said.

The most recent incident took place near Norway in late October when Tu-160s were shadowed by British and Norwegian jet fighters over the Barents Sea.

Additionally, Russian forces utilized both Tu-160 and Tu-95 bombers during a recent strategic nuclear forces drill, and the Defense Ministry announced that the recent Ocean Shield exercise in the Mediterranean involved Blackjacks that were described by the Russian defense ministry as involving undisclosed new tactics.

“The announced Tu-160 flight over the North Pole is also unusual as well as clearly aimed at us,” Schneider said. In August, two Blackjacks flew to the North Pole.

The Pentagon is expected to closely monitor the Blackjacks because of their potential to fire nuclear-armed cruise missiles at U.S. targets. A Pentagon spokesman could not be reached for comment Sunday.