The reactions to the FBI’s shocking announcement in which it announced it would not seek charges against Hillary Clinton are coming in fast and furious, with House Speaker Paul Ryan announcing moments ago that, at least in his view, Trump was spot on when he tweeted over the holiday weekend that the system is rigged when he said that the FBI’s decision not to suggest the Department of Justice brings charges against former Secretary of State Hillary Clinton “defies explanation.”

“While I respect the professional’s at the FBI, this announcement defies explanation. No one should be above the law.” 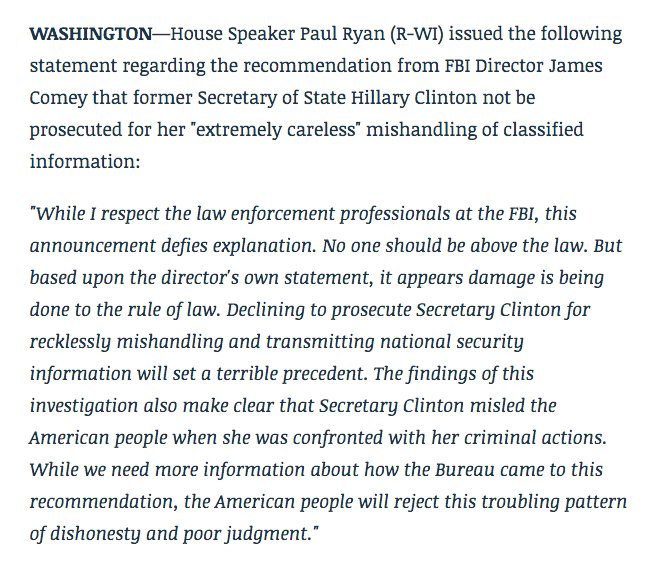 While I respect the professionals at the FBI, this announcement defies explanation. No one should be above the law. pic.twitter.com/OqctxglquI

“While I respect the law enforcement professionals at the FBI, this announcement defies explanation. No one should be above the law. But based upon the director’s own statement, it appears damage is being done to the rule of law,” Ryan said in a statement, adding that declining to prosecute Clinton for her handling of classified information “will set a terrible precedent.”

“The findings of this investigation also make clear that Secretary Clinton misled the American people when she was confronted with her criminal actions,” Ryan said in the statement.

Yes, but since no “reasonable judge” would prosecute Hillary (by which we assume he means no judge that has received quid-pro-quo from the Hillary foundation or affiliated and related parties),  and since the FBI “cannot find a case that would support bringing criminal charges on these facts” despite the FBI bringing criminal charges in precisely such a case less than a year ago, the “fix is in.”

Next, it was Judicial Watch’s turn to chime in: Judicial Watch President Tom Fitton made the following statement regarding the decision by Federal Bureau of Investigation Director James B. Comey that the Department of Justice not indict former Secretary of State Hillary Clinton for the disclosure of classified information on her non-state.gov email:

FBI Director James Comey detailed Hillary Clinton’s massive destruction of government records and grossly negligent handling of classified information.  Frankly, there’s a disconnect between Comey’s devastating findings and his weak recommendation not to prosecute Hillary Clinton.  Federal prosecutors, independent of politics, need to consider whether to pursue the potential violations of law confirmed by the FBI.

Judicial Watch helped break open the Clinton email scandal and, in the meantime, will independently continue its groundbreaking litigation and investigation.

Finally, none other than former presidential candidate and NYC mayor, Rudy Giuliani, opined when he told CBS that “No one should be above the law. Today Hillary Clinton was put way above the law.”

He also spoke to CNBC when he said that he is “shocked” at Comey’s conclusions because he “clearly concluded that Hillary violated 18 US Code section 793 when he said she was extremely negligent” while on Hillary’s intent Giuliani said that the circumstances of extreme negligence “over and over and over again” is the best proof of intent, “also her destruction of 34,000 emails also proves intent.”

Giliani’s conclusion: “This is an extremely hard conclusion to justify. People have been charged under these statues for far less than this”, but… when one is Hillary Clinton, the laws don’t exactly apply like they do for ordinary people.