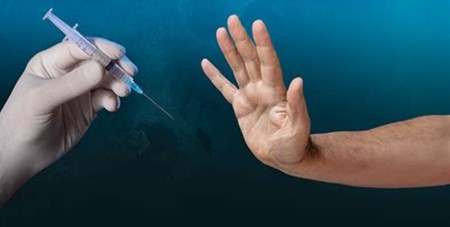 The state government of Florida is standing up against the effort to indiscriminately inject experimental coronavirus “vaccine” shots into children four years old and younger. And, as reported Wednesday by Christopher O’Donnell and Ian Hodgson at the Tampa Bay Times, Florida is the only state to make this decision, every other state government having pre-ordered the shots from the United States government in anticipation of the granting of US regulatory approval.

Good for Florida. It is making the right choice in refusing to be a pusher for these shots promoted relentlessly by a collaboration of big business, big media, and big government.

In May of last year I wrote about the need for state and local governments to refuse to participate in the then new rollout of experimental coronavirus shots to 12 to 15 years old children. I concluded my comments on the matter with the following statement after addressing dangers of the shots and the very minimal risk coronavirus tends to pose for children:

It is one thing to stand aside as parents choose to have their children injected with experimental shots that carry significant known health risks and unknown potential negative consequences. It is another to actively encourage the giving of such shots through participating in their promotion and distribution. At some point, shouldn’t state and local governments admit that the risk and rewards related to shots are so out of whack that their taking part in pushing the shot-giving is a clear menace? Being presented with the opportunity to give experimental coronavirus vaccine shots to 12 to 15 years old children seems like a good time to declare ‘no more.’

A statement from the Florida Department of Health, reprinted at Fox 13 TV of Tampa Bay, makes clear that the state government’s decision not to preorder the shots was its way of saying “no more” based on the state having come to its own independent decision that the shots are not the safe and effective wonder for all young children that many people in government and the media proclaim them to be. Here is that statement from the Florida Department of Health:

It is also no surprise we chose not to participate in the distribution of the COVID-19 vaccine when the Department does not recommend it for all children. Doctors can order vaccines if they are in need, and there are currently no orders in the department’s ordering system for the COVID-19 vaccine for this age group.

The local television news report also provided these cogent comments regarding the decision from Joseph Ladapo, the state’s surgeon general:

‘We expect to have good data that the benefits outweigh the risks of any therapies or treatments before we recommend those therapies or treatments to Floridians. That is not going to change. I don’t think that is particularly radical. I think it’s very sensible,’ said Ladapo. ‘From what I have seen, there is just insufficient data to inform benefits and risk in children. I think that’s very unequivocal.’

Bravo to Florida and its surgeon general, about whom I wrote positively upon his appointment to the position in September.

Hopefully, we will see more state and local governments looking critically at the new shady approval of experimental coronavirus shots for young children and declaring their refusal to participate as well.

Copyright © 2022 by RonPaul Institute. Permission to reprint in whole or in part is gladly granted, provided full credit and a live link are given.
Please donate to the Ron Paul Institute