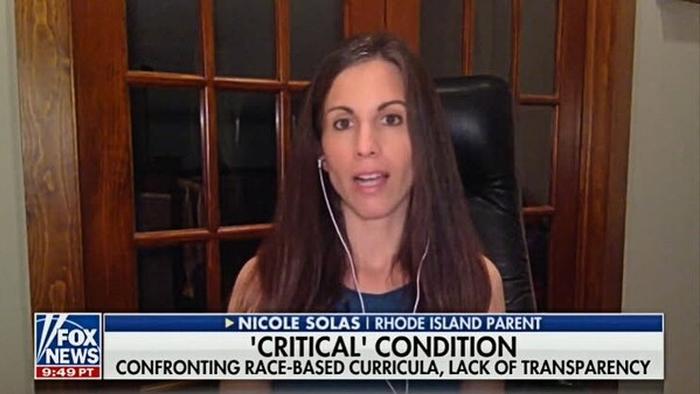 “My initial take is that this smells collusive. South Kingstown doesn’t want to produce records and the union is helping them out.”

Authored by Andrew Widburg via AmericanThinker.com,

Nicole Solas, a Rhode Island mom with a kindergartener in public school, was curious about whether CRT had entered her daughter’s school.

Therefore, she filed a Freedom of Information Act (FOIA) request with her school district.

“I became concerned that Critical Race Theory (CRT) and gender theory were integrated into lessons when an elementary school principal told me that teachers don’t refer to students as ‘boys’ and ‘girls,’” Solas wrote in an op-ed published on Legal Insurrection.

“Additionally, I was told a kindergarten teacher asks five-year-olds, ‘what could have been done differently on the first Thanksgiving’ in order to build upon a ‘line of thinking about history.’”

“This issue is a much larger one—one that involves a disturbing attempt by a nationally organized, racist group to create chaos and intimidate our district in recent weeks as we discuss bringing equity and anti-racism curriculum to our schools,” adding that,

“this is their MO nation-wide, and I anticipate other districts in our state will soon experience the same unfortunate influx we have.”

…and, just this week, the local branch of the National Education Association (America’s largest teacher’s union) sued to block her request.  Frankly, from a lawyer’s point of view, the union’s objections are ridiculous.

The complaint is here.  I’ve reviewed it, and, while I’ll be the first to admit that I last worked on school district law in the mid-1980s, I think I have enough experience under my belt to point and laugh at the complaint.

The remedy the union seeks is simple:

In short, this action seeks to: (a) prohibit the disclosure of non-public records; and/or (b) for those requests that call for personally identifiable and other personnel related information about public school teachers, that no records be disclosed under the Court employs a balancing test that properly assesses the public interest in the records at issue measured against the teachers’ individual privacy rights.

It’s certainly understandable that the teachers should have an expectation of privacy when it comes to records about their health or personal finances.  Otherwise, these are public employees.  If one of the teachers is sending around emails saying, “We’d better make sure the White students understand their unfairly acquired privilege,” it doesn’t matter if she didn’t fill out a form to make that statement.

Anything in the school’s possession that touches upon curriculum matters is appropriate for public consumption.  Much as the unions and school district would like to ignore the fact, it is the taxpayers who, by paying school salaries, are the employers.

The NEA explains that when the school principal refused to turn over papers and, instead, told Solas to utilize the state’s FOIA process, AKA the Access to Public Records Act (APRA), she did so with enthusiasm, as did others, once word got out about her efforts to pry loose information from her school.  Instead of producing the requested information, the school whined that Solas was asking for too much.

The NEA was also upset by multiple requests, a few of which I’ve highlighted here:

Documents about the union’s role in the school.

Considering the fact that unions have significant say in school curricula, this is an appropriate thing for a taxpaying parent to want to know.

“Public documents” about a union employee.

The fact that they are public makes them automatically discoverable.

Complaints about a specific retired teacher and union member.

If those complaints are relevant to CRT in the classroom, they should be discoverable.

Details of disciplinary [actions] against teachers.

This request made clear that it sought publicly available information because it further acknowledged that, even if the details were private, a parent is still entitled to know the names of the teachers who were subject to such actions.  Once again, this is appropriate information for taxpayers dealing with their children’s public schools.

No employee can ever write an email with an expectation of privacy.  All emails belong to the employer.  In the case of a public entity, the ultimate employer is the taxpayer.

A reasonable negotiation would exclude or redact emails in which teachers relate personal concerns, such as matters regarding their or their families’ health, personal financial issues, or other obviously private matters.  To the extent that the emails discuss school policy, there is no basis to object to them.  If the teachers are genuinely concerned about their well-being, their names can be redacted, provided that the content is produced.

It’s certainly true that there are a lot of bad judicial rulings out there protecting public employees from being called out for their bad actions.  However, without doing a review of that law, I’m betting that the rules are different when parents are seeking information about what schools are teaching their children — and if they’re not, they ought to be.

Meanwhile, at Legal Insurrection, law professor William A. Jacobson has a vast body of articles about Solas’s efforts to get these records.  Jacobson’s take is a little broader than mine about motives, but the same about the specifics of production:

My initial take is that this smells collusive. South Kingstown doesn’t want to produce records and the union is helping them out. The lawsuit purports to prevent disclosure of “private” information, but the public records laws and Solas’ requests pursuant to those laws only require the district to produce public records. The district has been very aggressive in asserting exemptions and redacting documents, so the union’s concern and rush to court seems peculiar, at best.

Ultimately, the school’s resistance, now with the backing of the union, is so over the top that it’s reasonable to infer that the school has been grossly abusing its access to innocent children in order to indoctrinate them with Critical Race Theory, an ideology so racist that, if one substituted Black or Jewish for White, it would be appropriate in a KKK or Nazi school.