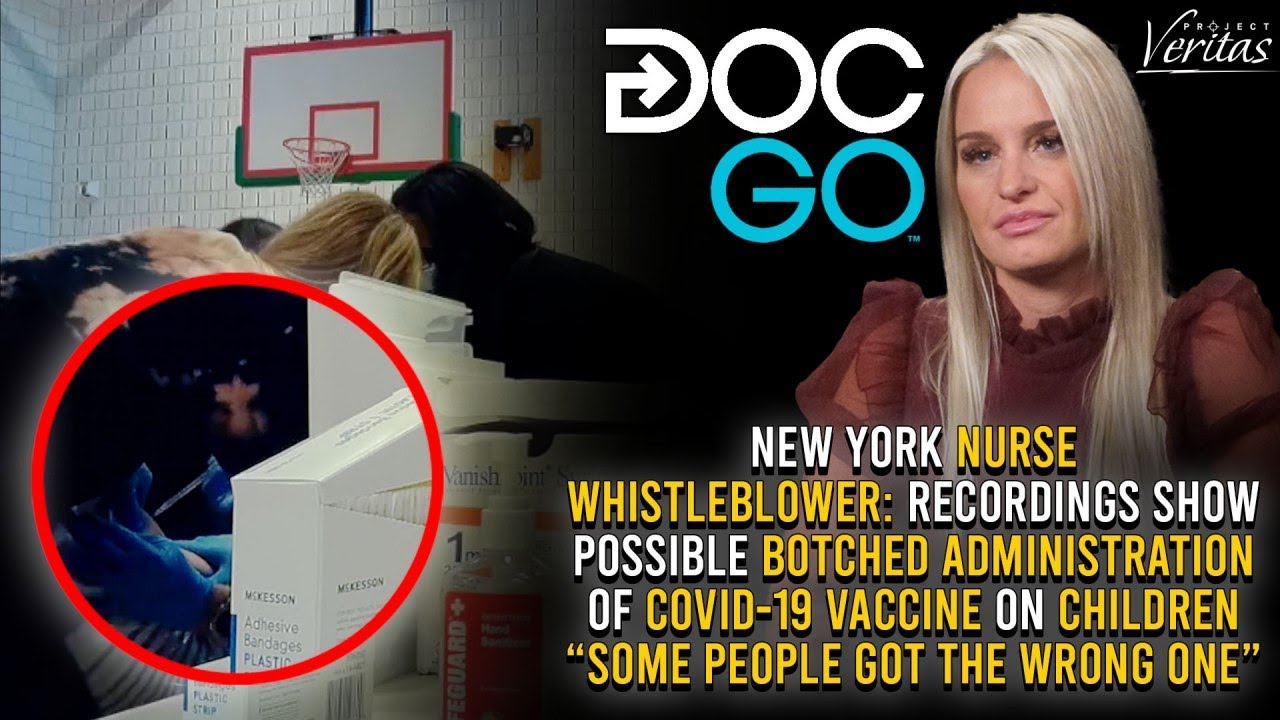 New York Nurse Whistleblower Recordings Show Possible Botched Administration of COVID-19 Vaccine on Children: ‘Some People Got the Wrong One ’
• Medical supervisor admits “some people got the wrong one.”.
• Nursing staff told to “YouTube it” when asking how to mix the COVID-19 Vaccine
• Nursing staff on video: “wrong mixture could cancel out [the protection of the vaccine] or have adverse effects.”
• A pediatric nurse came to Project Veritas to blow the whistle on New York contracted healthcare provider DocGo, and their subsidiary Ambulnz, who may have jeopardized the safety of thousands of people, including young children, through negligent administration of the COVID-19 vaccine.
• Recordings from the whistleblower show fellow medical staff acknowledging mistakes of improperly mixing and administering the Pfizer children’s vaccine with the wrong diluent (bacteriostatic water), lack of proper training, lack of incident reporting.
• Pfizer, the CDC, and the FDA are all very clear: the COVID-19 vaccine should only be administered with the proper saline solution; bacteriostatic water is NOT to be used.
• Project Veritas reached out to Pfizer, multiple doctors, and scientists. None were able to state with certainty what the adverse effects are on children getting the wrong mixture, or adults getting overdosed with the COVID-19 vaccine.

[NEW YORK, NEW YORK– January 26, 2022] Whistleblower recordings obtained by Project Veritas appear show medical staff and supervisors admitting they used the wrong dilutant in giving the COVID-19 Vaccine to children, lower income, and homeless adults, and confirming the error “could cancel out [the protection of the vaccine] or have adverse effects.” The company, DocGo and their subsidiary Ambulnz, failed to disclose the incidents. It is also unclear if any affected patients were ever notified.

The recordings, which come from a whistleblower employed through DocGo/Ambulnz, show nurses and other staff admitting they may have improperly mixed the COVID-19 Vaccine with bacteriostatic water instead of saline solution.

Pfizer, the CDC, and the FDA give clear instructions about diluents saying bacteriostatic water is not to be used.

Audio and video recordings, however, show nurses admitting that the erroneous mixture “could cancel out [the protection of the vaccine] or have adverse effects.” It is unclear if patients, including parents of children who were vaccinated, were ever notified, despite company supervisors appearing to be aware of the problem. According to the nursing staff, no incident reports were filed.

The potential risk to children who received the botched mixture was so significant that a nurse with DocGo/Ambulnz said she felt compelled to reach out to Project Veritas. “These are little kids, these are babies,” said the whistleblower during an emotional interview with Project Veritas founder James O’Keefe.

Guy Banks, a supervisor with DocGo/Ambulnz can be heard attempting to instruct staff on how to properly vaccinate patients over the phone. “Make sure it’s the right one, because some people got the wrong one,” Banks is heard saying, in reference to the diluents paired with COVID-19 vaccines.

The whistleblower’s recollection of the lack of training is astonishing. “On my first day there were no instructions about mixing the vaccine. I called the supervisor and asked, ‘how do I dilute this vaccine?’ He told me to ‘YouTube it.’ We were never given an in-service,” said the whistleblower. Proper in-service training is mandatory standard operating procedure in the medical field.

Project Veritas reached out to DocGo for comment spoke with President Anthony Capone who touted the training of DocGo medical staff and denied the possibility that patients received the wrong vaccine mixture. “We have no circumstances in company history when bacteriostatic water was used in diluting vaccine,” Capone said. He added that the footage could be describing “wrong stuff pulled from the shelves” but ultimately replaced before vaccines were administered. A full version of Capone’s response to the Project Veritas release is available at projectveritas.com.