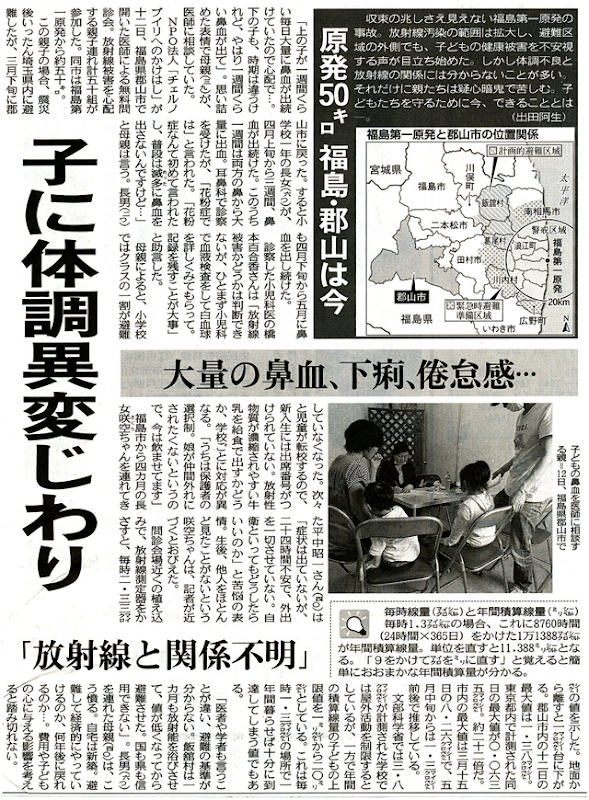 Once a malicious “baseless rumor” on the net, now it is written up in a regional newspaper with readership in Tokyo and Kanto area.

Tokyo Shinbun (paper edition only, 6/16/2011) reports that many children in Koriyama City in Fukushima Prefecture, 50 kilometers from Fukushima I Nuclear Power Plant, are suffering inexplicable nosebleed, diarrhea, and lack of energy since the nuke plant accident.

(The photo of the page from this blog site, in Japanese.)

Quick translation of the article:

On June 12, a non-profit organization called “The Bridge to Chernobyl” (チェルノブイリへのかけはし) held a free clinic in Koriyama City in Fukushima Prefecture, 50 kilometers [west] from Fukushima I Nuclear Power Plant.

Worried about the effect of radiation exposure, 50 families brought their children to see the doctor.

A 39-year-old mother of two told the doctor that her 6-year-old daughter had nosebleed everyday for 3 weeks in April. For 1 week, the daughter bled copiously from both nostrils. The mother said their doctor told her it was just a seasonal allergy from pollen. Her other child, 2-year-old son, had nosebleed from end of April to May.

The pediatrician from The Bridge to Chernobyl, Yurika Hashimoto, told the mother it was hard to determine whether the nosebleed was the result of radiation exposure, but they should have the blood test done for white blood cells. It was important to keep record, the doctor advised.

The family move out temporarily from Koriyama City to Saitama Prefecture after the March 11 earthquake, but came back to Koriyama at the end of March.

The mother said about 10% of pupils at the elementary school have left Koriyama. Each school in Koriyama decides whether to have the pupils drink local milk that the school provide, which tends to concentrate radioactive materials. In her daughter’s school, it is up to the parents to decide. But the mother said she let the daughter drink milk with other children because the daughter didn’t want to get excluded by other children for not drinking milk with them.

A 40-year-old father of a 4-month-old baby daughter was so worried that he never let the daughter go outside, even though she didn’t exhibit any ill effect of radiation so far. He said, “I’m so worried. I don’t know how to defend ourselves.” …