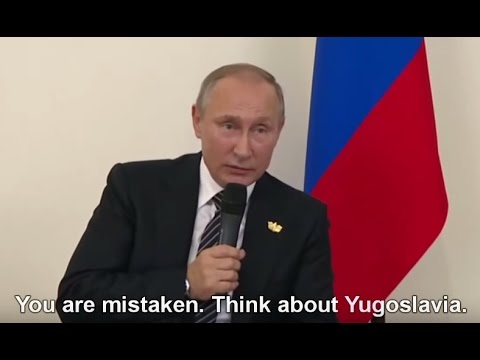 Deteriorating Russia-US relations: ‘It all started from Yugoslavia’
Relations between Moscow and Washington did not deteriorate because of or during the Syrian conflict, Putin said in a remark to a journalist, adding: “Just remember what was going on about Yugoslavia, it all started from there.” The Russian leader said that it’s not about any third side in particular, but relations worsen because “one country” wants to impose its policy and decisions upon the rest of the world.

“We are not against this country, but we oppose that decisions are made on a unilateral basis and are not thought through considering historic, cultural and religious peculiarities of one country or another,” even if there is a conflict within the affected nation” Putin

In Iraq, they do not know how to fight the terrorist groups and now there is a possibility of a battle to re-conquer the important city of Mosul, while Libya is no longer a state, added the Russian president.

They (the United States) do not like others to have different positions, pointed out Putin at a meeting with Russian reporters in New Delhi at the end of a summit of the Brics (Brazil, Russia, India, China and South Africa).

We have examples of that, he said. Was it I who turned the plane back in mid flight to suspend a visit to Washington in March 1999, when the NATO began bombing Yugoslavia, Putin asked.

Then Russian Foreign Minister Yevgeny Primakov suspended his visit when he knew that the North Atlantic Treaty Organization (NATO) had launched air strikes on Belgrade under the pretext of stopping an alleged ethnic cleansing.

Putin recalled that late President Boris Yeltsin was a positive character to the West while he did not assume a position of defense of national interests in the case of Yugoslavia.