Skip to content
Uncategorized
July 10, 2011 Q
I am presenting rock solid information; it does not get any better when NASA is your source. What you are about to read and see is happening. Last night, looking at a NASA mathematical model of comet Elenin, I found out that a large celestial body has already penetrated the solar system and is on course for a near and possibly horrific encounter with the earth in the fall of 2011. What we do not know is the size and mass of comet Elenin though I have no doubt that it is known by the authorities.
Elenin is presently being tracked as it goes through the asteroid belt on its way into the inner solar system. I am truly sorry to have to be the bearer of such grave and threatening news but the source, NASA, is impeccable. We have an incoming mass (what might possibly be a neutron star) coming in and it will do a hard turn around the sun like any comet would, crossing and coming in between Mercury and Venus before starting its journey back out. On its way out it will cross our bow, meaning it will pass very close to the earth and the earth will pass behind it, plowing into its tail.
In the video below you will see this explained graphically. What you will see with mathematical precision is that every time this celestial body comes into alignment with the earth and sun we have a huge earthquake. The last three alignments produced the Japanese 9.0 quake, the one in New Zealand and before that the one in Chile. On March 11th Elenin was much farther out. When the next alignment happens it will be devastatingly close. The main point to understand is that if Elenin was just a normal comet it would not have the mass to generate a gravity pull that would affect the earth when the earth swings around into alignment.
~~~~
David Morrison, Astrobiology Senior Scientist at NASA, in an official communication on March 1st acknowledged no threat from Elenin. Ten days later Elenin came into alignment with the earth and the sun . . . and Japan was almost destroyed.
Morrison confirmed that Elenin’s perihelion (closest to the sun) is in early September 2011 at a distance from the sun of 40-45 million miles. He said it will be closest to the earth on about October 16, at a distance of about 21 million miles, but he believes there is no reason to think Elenin is any different from a normal comet. I wonder if he changed his mind after March 11th. He dismisses everything alarming as pure fiction.
This is the real deal though—that alignment did happen as we can clearly see from the NASA simulation. Now we have to live with increasing radiation spreading around the northern hemisphere. We know how easy it is for people in authority to cover up information and lie with a straight face. The Japanese government admitted it kept in secret at least 5000 radiation measurements and assessments after the nuclear event that struck the Fukushima Daiichi NPP in March. This was done in order to not induce panic in the population, a representative of the staff dealing with the nuclear emergency told ITAR-TASS.
We have to acknowledge and accept that there is a danger and a possibility that part of our civilization and the people in it will be lost. This is not a time to deny anything or a time to hold back the tears. I hope to God I am wrong but the evidence cannot be dismissed casually, though of course it will be. One picture is worth a thousand words and NASA has given us visible proof to suggest Elenin is playing a role in events down here on our planet even from a long distance. It is not a time for fear; rather it is a time for love and cooperation in the context of preparation on all levels for what is to come.
There is a history to Elenin that has been visible for years but now she is upon us and there is nothing we can do but prepare and pray—and love like we have never loved before. We have to acknowledge and accept that there is a danger and there is a possibility that part of our civilization and the people in it will be lost. The below video displays what has been known by NASA for decades.
~~~
The whole solar system seems to be heating up, the sun is becoming active and earth-changing events are becoming more frequent and intense with beyond-worst-case-scenario climate changes hitting around the globe. We have increasing geo-activity, volcanoes, earthquakes, rogue tides, sinking islands, magnetic pole migration, mass animal deaths, huge unexplained whirlpools in the Atlantic and so much more it would make anyone’s head spin.
We were tipped off to something unusual happening when Greenland experienced sunrise two days early, which was a strong sign that something was off with Earth’s orbit. On January 25th I said:

There is a lot of information (except in the mainstream press) about 2012 and the end of the Mayan Calendar that many are obsessing over but there is more than enough in 2011 to worry about and act on. Last week I was knocked off my chair with the report from the Arctic Circle in Greenland that the sun came back over the horizon two days early. That’s no small occurrence, is not something easy to make up, is not being reported as expected in the mainstream press, and only wild and stupid theories like global warming (since we really have rapid cooling) are being blamed for the event. 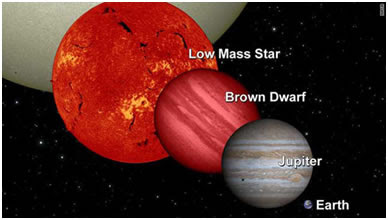 October 2 is the day that the brown dwarf crosses Venus’ orbit again to begin trekking in the direction of earth. Two weeks go by and the brown dwarf crosses the earth orbit line to pass directly in front of our planet at just 22.3 million miles away, which is the nearest point in our encounter. The brown dwarf crosses the Mars orbit line on November 14, 2011 on the way to the third conjunction on November 22 where the earth once again passes directly between the two like on March 15.
Conclusion
An approaching brown dwarf star answers a lot of questions about what is happening all around us that others simply cannot begin to answer. No one really knows what will happen in the fall of this year as this incoming celestial body gets between us and the sun and then rebounds out again and heading directly into earth’s neighborhood. One person has speculated that it could rip our moon loose. It could hit us if its flight plan is changed by hitting an asteroid in the next few days. That could be possible if it really were a comet, but if it is a neutron star with a large mass, nothing will deflect its ordained path.
If we are lucky, nothing will happen but humanity is not looking or feeling lucky these days.
What seems likely is what most of the ancient cultures and religions remember—huge floods that pass the world over. The only way the world can have a global flood is if there is some event like an asteroid impact, polar shift, or a very dense object passing close by earth that causes a massive tsunami tide. The gravitational pull would grab the water and pull it over the land on a massive scale, much like the moon does today on a smaller scale in the form of tides.