In Response To: A CLEAR AND PRESENT DANGER: ELEMENTS OF CONTRACT/COMPACT: Proposed amendments to the68 GCA could destroy 2A. (watcher51445)

1—Closeup, magnified copy of Obama’s Kenyan birth certificate with analysis and witnesses……Don’t miss this one!! $2 million spent to cover up birth and college docs.
2—Video of Obama’s grandmother certifying his Kenyan birth.
3—Defense Intelligence government contractor’s 1992 anecdotal conversation (story at the bottom) regarding Obama’s communist grooming and training via elite benefactors….Mr. Fite should be subpoenaed to testify……..somewhere!

Be sure to read the article at the bottom. 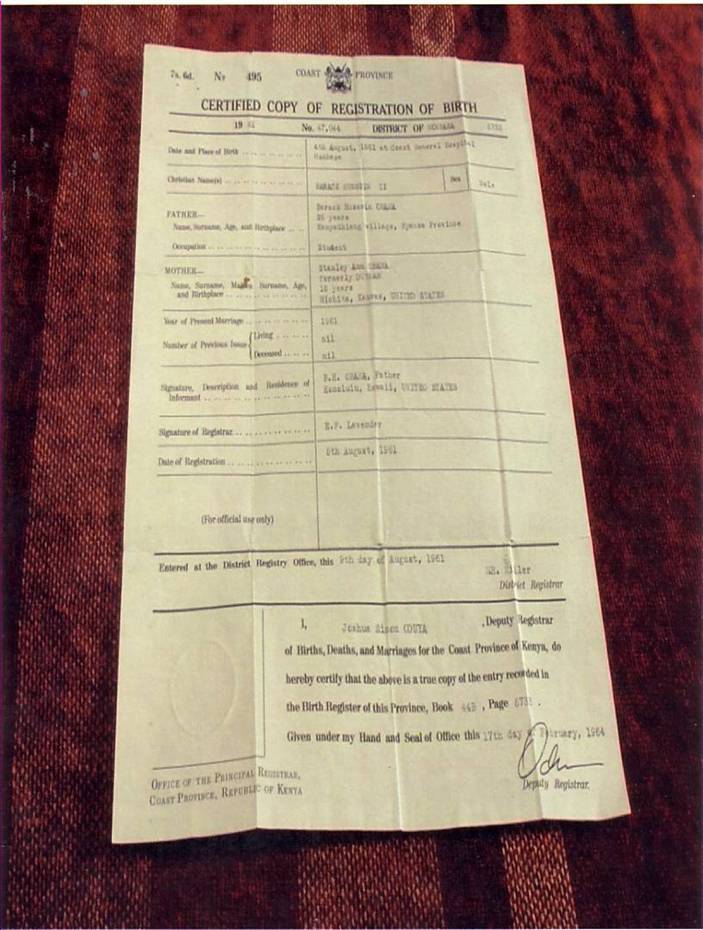 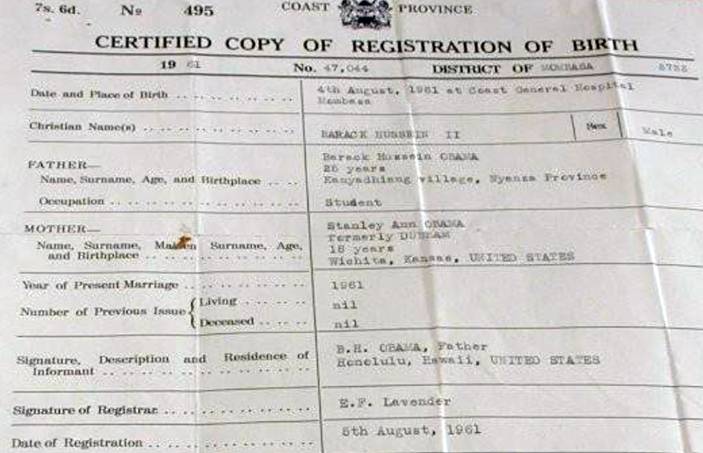 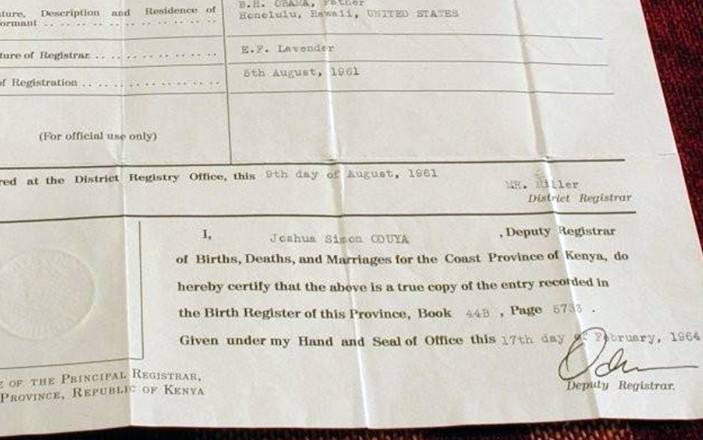 “I asked a British history buff I know if he could find out who the colonial registrar was for Mombasa in 1961.
He called me up a few minutes ago and said “Sir Edward F. Lavender”
Source(s): “Kenya Dominion Record 4667 Australian library.”
Posted by Alan Peters at 11:56 PM
Testimony from a Mombasa science teacher and the Mombasa Registrar of births that Obama’s birth certificate from Mombasa is genuine. A copy of President Obama’s birth certificate that Lucas Smith obtained through the help of a Kenyan Colonel who got it recently directly from the Coast General Hospital in Mombasa, Kenya. 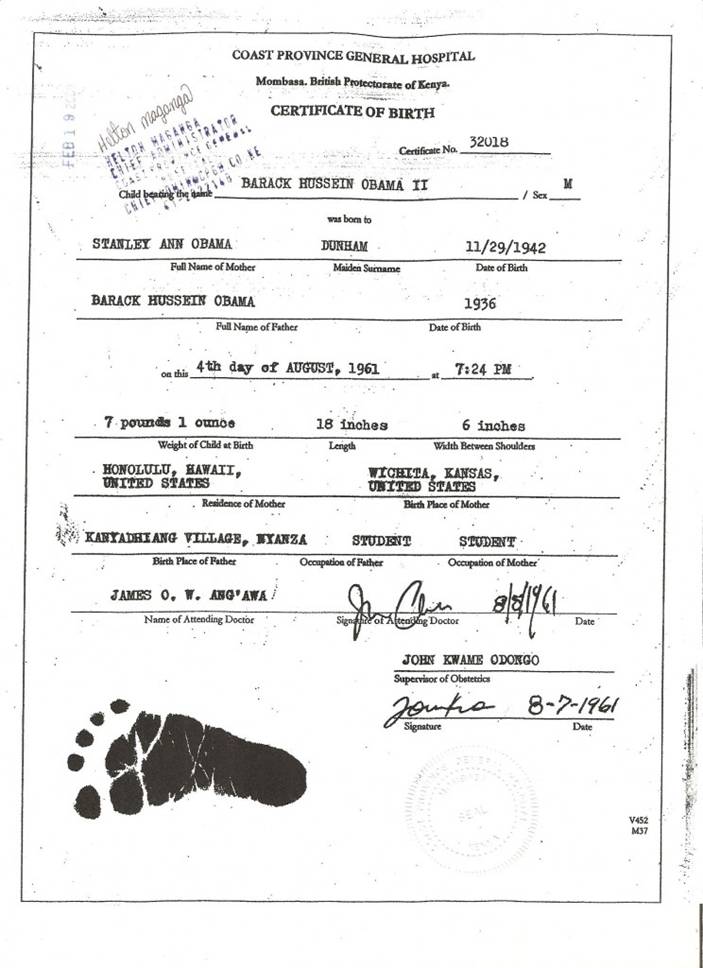 Tom Fife in the American Free Press was in Moscow in 1992 where a member of the Russian Academy of Sciences stated they had trained a Barack Obama as a communist and atheist and he will make easier the triumph of communism over the USA. The article is at the bottom of this home page regarding the birth of Barack Hussein Obama II in Mombasa , Kenya . Grandmother of President Barack Hussein Obama, Jr. reveals below the story of his birth in Mombasa , Kenya , a seaport, after his mother suffered labor pains while swimming at ocean beach in Mombasa .

“On August 4, 1961 Obama’s mother, father and grandmother were attending a Muslim festival in Mombassa , Kenya . Mother had been refused entry to airplanes due to her 9 month pregnancy. It was a hot August day at the festival so the Obama’s went to the beach to cool off. While swimming in the ocean his mother experienced labor pains so was rushed to the Coast Provincial General Hospital, Mombasa, Kenya where Obama was born a few hours later at 7:21pm on August 4, 1961. Four days later his mother flew to Hawaii and registered his birth in Honolulu as a certificate of live birth which omitted the place and hospital of birth.”

The local Imam in Mombasa named Barack with his middle name Hussein so his official name on his certificate of live birth below is Barack Hussein Obama, II. 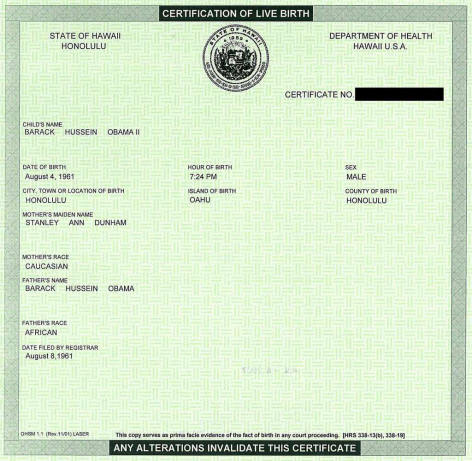 n USA all births are registered by hospitals and not by mothers.
No hospital of birth is listed nor is this a birth certificate.
A video showing how an Obama staffer forged above green certificate of live birth.
www.youtube.com/watch?v=9QdyLOUHz-A

The Washington state case also alleges, “Wayne Madsen, Journalist with Online Journal as a contributing writer and published an article on June 9, 2008, stating that a research team went to Mombasa, Kenya, and located a Certificate Registering the birth of Barack Obama, Jr. at Coast General Maternity Hospital, to his father, a Kenyan citizen and his mother, a U.S. citizen.

I happen to be Kenyan. I was born 1 month before Obama at Mombasa medical center. I am a teacher here at the MM Shaw Primary School in Kenya . I compared my birth certificate to the one that has been put on by Taitz and mine is exactly the same.
I even have the same registrar and format. The type is identical.
I am by nature a skeptical person. I teach science here and challenge most things that cannot be proven.

So I went to an official registrar today and pulled up the picture on the web. They magnified it and determined it to be authentic. There is even a plaque with Registrar Lavenders name on it as he was a Brit and was in charge of the Registrar office from 1959 until January of 1964.

So what you say is true about Kenya not being a republic at the time of Obama’s birth, however it was a republic when the copy was ordered.

The birth certificate is genuine. I assure you it will be authenticated by a forensic auditor. We are very proud Obama was born here.

We have a shrine for him and there are many people who remember his birth here as he had a white mother. They are being interviewed now by one of your media outlets.

Fortunately they even have pictures of his parents with him immediately after his birth at the Mombasa hospital with the hospital in the back ground.

It will be a proud day for us when it is proven that he was born here and a Kenyan became the most powerful man in the world.

I encourage anyone to come here and visit. I will be happy to take you and show you the pictures at the hospital myself as well as my document and many others that are identical to what Taitz posted.

Obama has fooled the entire USA which gives him the only award he deserves, The Imposter of the USA Century. Foreign born are not allowed to be US President: www.youtube.com/watch?v=yl1K94ALlTA&feature=related 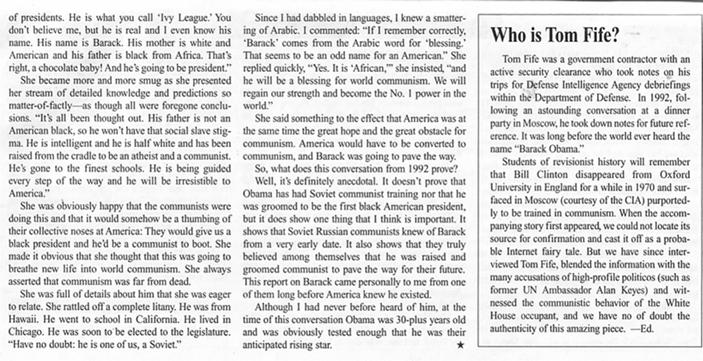