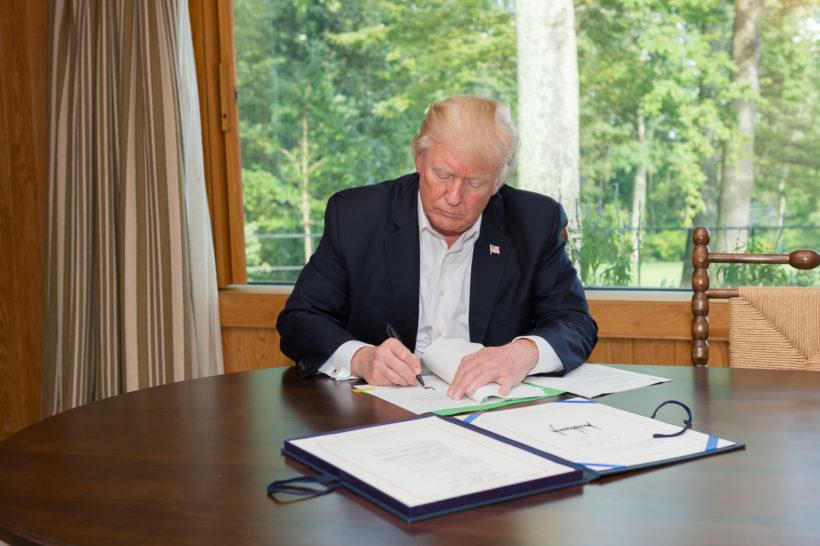 The move from the House and Senate GOP campaign arms, as well as the Republican National Committee (RNC), marks an escalation in the conservative battle against the country’s largest tech companies, which they claim routinely censor right-wing voices. Critics have insisted there is little evidence to substantiate those claims beyond individual anecdotes.

“Twitter’s hostile actions toward Leader McConnell’s campaign are outrageous and we will not tolerate it,” Jesse Hunt, a spokesman with the National Republican Senatorial Committee (NRSC), said in a statement to The Hill.

“The NRSC will suspend all spending with Twitter until further notice. We will not spend our resources on a platform that silences conservatives.”

Authored by Michael Snyder via The Economic Collapse blog,

It appears that President Trump is getting ready to bring down the hammer on the big social media companies.

According to Politico, the Trump administration is in the process of drafting an executive order that will “tackle Silicon Valley’s alleged anti-conservative bias”.  And it is very much in President Trump’s own self-interest to do this.  Social media played a key role in helping him win in 2016, but since that time we have seen an unprecedented wave of censorship on the major social media platforms, and most of that censorship has been directed at conservative voices.  If President Trump doesn’t do something, it is hard to see how he will win in 2020, and of course that is precisely what the leftist executives at the big social media companies want.

Ultimately, it would take an act of Congress to do everything that needs to be done, but President Trump should be applauded for trying to do what he can on his own.  Apparently Politico was able to speak to three separate sources that are familiar with the drafting of this new executive order, and after speaking to all of them Politico came to the conclusion that the Trump administration is very serious about “wielding the federal government’s power against Silicon Valley”…

The White House is circulating drafts of a proposed executive order that would address allegations of anti-conservative bias by social media companies, according to a White House official and two other people familiar with the matter — a month after President Donald Trump pledged to explore “all regulatory and legislative solutions” on the issue.

None of the three would describe the contents of the order, which one person cautioned has already taken many different forms and remains in flux. But its existence, and the deliberations surrounding it, are evidence that the administration is taking a serious look at wielding the federal government’s power against Silicon Valley.

It is not clear if such an executive order would hold up in court, and undoubtedly there will be legal challenges right away.  Of course those legal challenges will take a long time to play out, because we all know how quickly our legal system moves.

But for the short-term, what really matters is what effect this will have on the behavior of the big social media companies.  The goal should be to scare them into doing the right thing, and hopefully the wording of this executive order will be as forceful as possible.

Since some of these big tech companies have contracts with the federal government, in his executive order Trump could try to prohibit federal contractors from discriminating against customers based on their political views.  A similar approach has been attempted a couple of times before…

One potential approach could involve using the government’s leverage over federal contractors, a tactic the Obama administration used to advance LGBT rights. A 2014 executive order prohibited federal contractors from discriminating against workers on the basis of sexual orientation or gender identity.

Trump earlier this year signed an executive order meant to promote free speech on college campuses by requiring schools to agree to promote free inquiry in order to receive federal research funding — something the schools were already supposed to do.

We’ll see what happens, but hopefully Trump can get this executive order issued quickly, because the 2020 election season has already begun.

Of course liberals are upset about this potential executive order, and many of them continue to insist that conservatives are not being specifically targeted by the social media companies.  For example, just check out this excerpt from a Vox article…

As Recode and other outlets have reported, there has been no evidence to prove that companies such as Google and Twitter have anti-conservative bias baked into their products. Regardless, the president and Republican lawmakers have continued to make such claims, emboldened in part by a recent claim by a former Google engineer that he was fired for his conservative political views. (Google says the employee was fired for misusing company equipment; other reports indicate that he shared emails internally in which he defended white supremacist groups.)

Because of what I do, I have connections throughout the conservative media, and just about everyone I know has been censored, banned, shadowbanned or deplatformed in some way, shape or form.  Over the past two and a half years we have witnessed the greatest purge in the history of the Internet, and it has been absolutely brutal.

Some conservative voices are still able to use social media, but the heavy hand of censorship is always present.  For example, every time Dr. Michael Brown posts a video on YouTube, it is immediately “flagged as unsuitable for most advertisers”…

To this moment, the instant one of my YouTube videos is posted—and I mean the very instant—it gets flagged as unsuitable for most advertisers, which we then have to contest by calling for a manual review. At that point, you genuinely have no idea what the reviewer will decide.

In response to a coordinated, heavily-funded smear campaign against Natural News and myself, the Health Ranger, Facebook has now permanently banned Natural News from posting content. The channel name that has been banned is Facebook.com/healthranger, which was our primary channel reaching over 2.5 million people.

This is on top of the permanent bans of Natural News content from Twitter, YouTube, Pinterest, Google News, Apple and other techno-fascists that now represent the greatest threat to human freedom the world has ever seen.

There is no reason why Mike Adams should have ever been banned by anyone.  I have had the opportunity to sit down with him in person, and he is someone that cares deeply for America and for those around him.  What the big social media companies have done to him is absolutely disgusting.

But of course he is far from alone.  One study found that since the 2016 presidential election, social media traffic to a group of some of the most conservative websites on the Internet was down by 93 percent.  You can find the full study right here, and it is definitely worth reading.

In the end, it is very simple.  The leftists that run the big social media companies hate what we believe, and they don’t want us to get the truth out.  The don’t believe in a free marketplace of ideas, because their ideas always lose.

So the only way that they can win is by shutting us up, and that is precisely what they have been attempting to do.

The social media giants built multi-billion dollar empires by giving everyone a voice, but now that they have such a dominant position on the Internet they have decided that many prominent conservative voices should be completely silenced.

They want to control what ideas people are exposed to, thus shaping the overall direction of the country as a whole.

If they are allowed to get away with it, they will greatly alter the political future of America far beyond the 2020 election.

Something needs to be done immediately, and so let us hope that President Trump gives this executive order some really strong teeth.