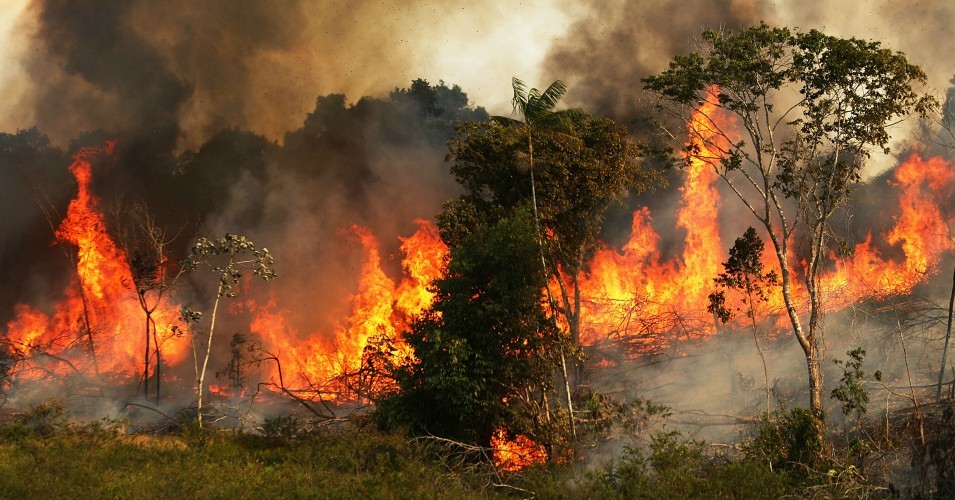 “The Amazon rainforest has been burning for three weeks! We are on the verge of losing it completely if the fire isn’t put out. The loss of trees, the loss of biodiversity is what is accelerating climate change.”

The hashtag #PrayForAmazonia went viral on Tuesday as social media users attempted to draw the world’s attention to the Amazon rainforest, which has been devastated for weeks by fires so intense they can be seen from space.

According to Euro News, it is unclear whether the fires were caused by agricultural activity or deforestation. Both have accelerated rapidly under Brazilian President Jair Bolsonaro, who made opening the Amazon to corporate exploitation a key plank of his election campaign.

Twitter users on Tuesday slammed the media for paying too little attention to the Amazon blazes, particularly given the essential role the rainforest plays in absorbing planet-warming carbon dioxide—a capacity that earned it the nickname “lungs of the world.”

“The Amazon has been burning for three weeks, and I’m just now finding out because of the lack of media coverage,” wrote one observer. “This is one of the most important ecosystems on Earth.”

Satellite data collected by the Brazilian government’s National Space Research Institute (INPE) published in June showed that deforestation has risen dramatically under Bolsonaro, who dismissed the research as “a lie” and fired INPE director Ricardo Galvão for defending the data.

As The Guardian reported, the INPE findings showed the Amazon “lost 739sq km during the 31 days [of May], equivalent to two football pitches every minute.”

The number of forest fires in the Amazon Rainforest in #Brazil is up 82% from last year. The fires are purposely set by ranchers to clear land. They then burn out of control. The Bolsonaro govt has eliminated restrictions on burnings. This must be stopped! #PrayforAmazonia. RT pic.twitter.com/cAyUlqjdRz

This is the Brazilian environmental policy under president Bolsonaro. He doesn't care about life. The Amazon Rainforest's burning for about 3 weeks and nothing's been done. @BadAstronomer @azmoderate #PrayforAmazonia #PrayforRondonia pic.twitter.com/haIrQzFdk9

The Amazon rainforest has been burning for 3 weeks! We are on the verge of losing it completely if the fire isn't put out.

The loss of trees, the loss of biodiversity is what is accelerating CLIMATE CHANGE.

THIS IS AN INTERNATIONAL EMERGENCY. This is a CRISIS.#SaveTheAmazon pic.twitter.com/EDx1bub5AZ

One large fire, which started in late July, burnt around 1,000 hectares of an environmental reserve in the Brazilian state of Rondônia—located on the border with Bolivia. This blaze, along with others in the region, created dense plumes of smoke that spread far across the state, endangering the health of people living in the area and the lives of animals.

Two weeks ago, the state of Amazonas in the northwest of the country declared a state of emergency in response to an increase in the number of fires there… Various fires have also been burning in the state of Mato Grosso, according to satellite imagery.

The fires have become so intense that smoke from the blaze darkened the afternoon sky on Monday in São Paulo, Brazil’s most populous city.

“The Amazon rainforest has been on fire for weeks, and it’s so bad it’s literally blotting out the sun miles away,” tweeted Robert Maguire, research director at U.S. government watchdog group Citizens for Ethics and Responsibility in Washington.

The Amazon rainforest has been on fire for weeks, and it's so bad it's literally blotting out the sun miles away https://t.co/oDjcECJVgp

The advocacy group Amazon Watch on Tuesday called the Bolsonaro regime’s attacks on the world’s largest rainforest “an international tragedy.”

“What can we do?” the group tweeted. “1. Support the courageous resistance of the indigenous peoples of the Amazon. 2. Make clear to the agribusiness and financiers involved in the destruction that we won’t buy their products.” Source: #PrayForAmazonia Goes Viral as Twitter Users Call Attention to