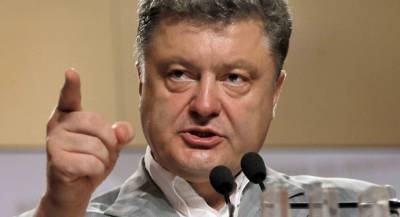 The article originally appeared at BILD. Translated by Mihajlo Doknic

Kiev – He has one oft he most difficult jobs in the world: Petro Poroshenko (49) the President of Ukraine. His country in a long-standing conflict with Russia and almost daily people are dying. On Monday German President Gauck welcomed Poroshenko with military honor and later Poroshenko met Chancellor Merkel. Just before he left for Germany he met reporters from the German tabloid BILD for an interview.

BILD: Mister President it is now five weeks ago that in Minsk a ceasefire was agreed with Russia. What are you going to say to Chancellor Angela Merkel on Monday about the situation in Ukraine?

Poroshenko: ‚First let me say this: Chancellor Merkel’s role in assisting Ukraine is very special. She shows an enormous personal commitment for peace. Angela Merkel and the French President Francois Hollande, with their diplomatic talent, have made it possible that in the end there was an agreement in Minsk. They have supported us from the beginning. But now we are facing an extremely dangerous situation and the Ukraine urgently needs German help…’

BILD: Because the fighting still continuous in East Ukraine, despite Minsk?

Poroshenko: ‚Ukraine has fulfilled all terms of the Minsk agreement and we also immediately implemented the ceasefire. But Russian fighters have done the opposite! Shortly after the beginning of the ceasefire they have attacked Debalzeve. Since the signing of the agreement in Minsk we have lost 68 soldiers and 380 were wounded. The Russians ‚are shooting’ every day, sometimes 60 times a day. The ceasefire has been violated over 1100 times’.

BILD: So the Minsk agreement has failed?

Poroshenko: ‚The good news is that the fighters, supported by Russia, are not using rocket launchers and other heavy weapons as they did before. But the truth is that the agreement is not working. For us, Minsk is hope, not reality. They say that they are going to withdraw their weapons but they don’t allow the OSCE to validate it. They publically display Ukrainian soldiers in a humiliating way as prisoners of war in the streets of Donezk. And we are afraid that a storm on Mariupol can happen any time.

Poroshenko: The whole world needs to understand that Russia is waging war against the Ukraine. It began with the Russian separatists, who were supported with Russian weapons in spring 2014. And since summer there are regular Russian troops in the Ukraine, ten thousands of soldiers. The only way to stop this war is by complete withdrawal of Russian soldiers.’

BILD: More and more Ukrainians are demanding a Ukrainian NATO membership, because of the Russian threat…

Poroshenko: ‘I don’t think it makes sense to discuss this question at the moment. It is not on the agenda for the time being. We have to concentrate on the reforms, do our homework. This will automatically lead to a referendum about NATO membership and the Ukrainians will decide for themselves. It must be clear: We won’t allow Russia to tell us which alliance we are allowed to be in or not. And it is also clear: Since 2008 there is a commitment [by NATO] that NATO’s door is open for us’.

BILD: In less than three years the Football World Cup will take place in Russia. Is that for you conceivable at all?

Poroshenko: ‘They say that football should be separated from politics. But how could this be possible? Shahtor Donetsk, our successful Ukrainian football club, has to play in Lviv, some 1200 kilometers away, because Russian soldiers have occupied Donezk. I think we need to start talking about a boycott of the World Cup. As long as Russian troops are in the Ukraine a World Cup, for me, in this country is inconceivable’.

BILD: In less than six weeks Chancellor Merkel is going to visit Moscow and together with President Putin commemorate the 70th anniversary of the end of WWII

Poroshenko: ‘The dialogue between Chancellor Merkel and Russia is very important for us. However, I have doubts that her visit is sending the right signals. What Russia is doing now has nothing to do with the ideals that led to victory over the Nazi’s.’

BILD: In the US the tone towards Putin is more aggressive than in Europe. Can your rely on the Americans more than you can on Europe?

Poroshenko: ‘For a solution of the conflict the unity between the US and Europe is very important. If you are making references to the possible delivery of weapons: Not only the US is helping us. Eleven other European partners are supporting us with military and technical equipment. We are talking about defensive weapons and military support.

BILD: What are you expecting from Germany in this matter?

Poroshenko: ‘We already receive protected vests from Germany. But we need more in order to be able to defend ourselves. We need radars, drones, transmitters and night vision devices. And I will talk with Chancellor Merkel about that. We are not talking about offensive weapons. We are not going to attack anyone.

BILD: The current sanctions on Russia, are they sufficient?

Poroshenko: ‘There must be a reaction to the violation of the ceasefire. This could mean more sanctions. However, the existing sanctions must be extended until the end oft he year.’

BILD: People in Germany fear that the conflict in the Ukraine can lead to a ‘big war’?

Poroshenko: ‘I am the president of peace, not of war. And I hate to talk about the possibility of a Nuclear War. But regardless of this terrible scenario we need to take off our ‘rose-colored glasses’ and recognize the fact, that the security architecture that has secured peace for over 70 years is not working anymore. One example: The UN Security Council is powerless, because Russia, as e permanent member, can block all decisions (resolutions). Iraq, Chechnya, Transnistria, Afghanistan, all of them were conflicts of short duration. In the Ukraine we are witnessing a war, where there are 50.000 soldiers on each side. A war, where the largest military machinery in Europe (Russia) is in action. This is a global war in which for Russia there are no more Red Lines.

BILD: Do you think Putin, faced with an extreme situation, would use Nuclear Weapons?

Poroshenko: ‘If you are asking me now: No, I don’t think so. However, had you asked me 18 month ago, if I thought it was possible that Russia would annex Crimea, I would have answered no. And if you had asked me if Russia would send regular Russian troops to Ukraine to kill Ukrainians, still I would have answered no. It is like it is: For Russia there are no more Red Lines’.

BILD: When you talk to Putin directly: What is your impression of him?

Poroshenko: ‘Let me give you an example. In Minsk, I have asked him about our young pilot whom the Russians captured. I asked Putin: When are you going to free her? She was just defending her country, on Ukrainian soil. For nine month now you have been illegally imprisoning her. Putin coldly answered: There is nothing I can do about this. Our judiciary is independent’.

BILD: What are the real intentions of Putin?

Poroshenko: ‘He believes that he is acting in the interest of Russia. I think that he is not acting in the interest of Russia. Putin wants to control the Ukraine, however, he won’t succeed even if he attacks Kiev. Never before was the Ukraine so united in pursuing its goal of becoming a free and democratic country. Putin and the Russian aggression made our country so much more ‘pro-European’ like nobody could have imagined before’.