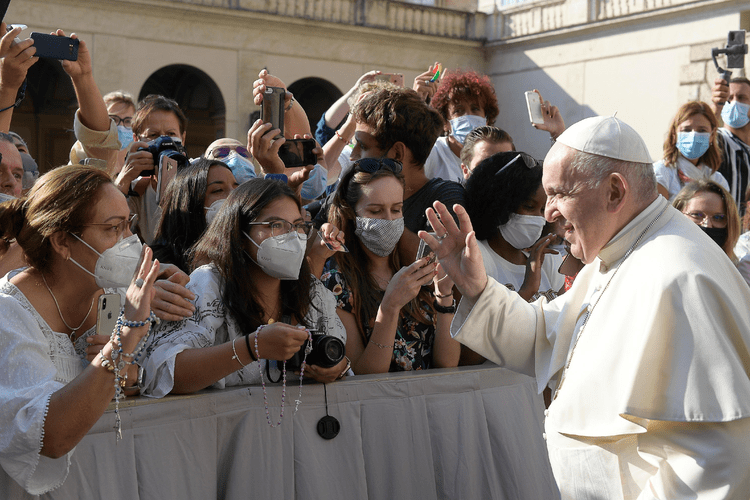 Mara Grassi told Pope Francis, “We wish to create a bridge to the church so that the church too can change its way of looking at our children, no longer excluding them but fully welcoming them.”

The parents are members of an Italian association, Tenda di Gionata (“Jonathan’s Tent”), which welcomes and provides information and formation to L.G.B.T. Christians, their families and pastoral workers. The association was founded in 2018 by people inspired by a Catholic priest, the late Rev. David Esposito from the Diocese of Fermo in the Marches region of Italy.

Mara Grassi, the vice president of the association, together with her husband Agostino Usai—both wearing masks—presented the pope with a booklet titled “Genitori Fortunati” (“Fortunate Parents”) that documented the experiences of these parents with the church, experiences that were at times far from easy, and their requests for acceptance despite all too often being considered “undesirable” by church communities. (An English-language version will soon be published)

Mara Grassi told Pope Francis, “We wish to create a bridge to the church so that the church too can change its way of looking at our children, no longer excluding them but fully welcoming them.”

Speaking afterward to Avvenire, the daily paper of the Italian Bishops’ Conference, Ms. Grassi said she told the pope that “our association aims to foster dialogue between the church and the families of L.G.B.T. [people].” Taking her cue from the booklet’s title, she confided to him, “We consider ourselves fortunate because we had to change the way that we had always looked at our children. We found a new way of looking that enabled us to see in them the beauty and love of God.”

According to her account of the conversation, she told Francis, “We wish to create a bridge to the church so that the church too can change its way of looking at our children, no longer excluding them but fully welcoming them.”

Having listened carefully to what she said, Pope Francis reassured her, “The church does not exclude them because she loves them deeply.”

As he bade them farewell, the association gave the pope a rainbow-colored T-shirt with the words “In love there is no fear” emblazoned on iT.

Speaking to La Repubblica, the Italian daily, after the audience, Ms. Grassi, a Catholic mother of four children—the eldest of whom is a gay person, now aged 40—said she experienced “very strong emotions” in her encounter with Pope Francis.

She revealed that “for many years I was like a blind person. After I came to know that my son was homosexual, I suffered a lot because the rules of the church made me think that he was excluded from the love of God. Nobody helped me.”

Things changed, she said, when she attended a vigil against homophobia at the church of Regina Pacis in Reggio Emilia, a city in northern Italy. There she met other parents, believers like herself, who have children that are gay, and through these parents she met the Rev. Paolo Cugini, who helped her understand that “faith and homosexuality are not in opposition, and that God loves my son as he is.”

She told the pope that she is the mother of a son who is gay and “who left the church because he did not feel accepted in his diversity.” She explained how, thanks to her son, she changed her way of seeing things and like other persons in the same situation, after being “destabilized at first” on learning of her son’s homosexuality, she has come to see that “we are fortunate parents.”

She said the pope, in response, assured her and the other parents present that “God loves our children because they are all children of God.” And when she requested that the church, too, should change its ways so that no one feels excluded, Francis reassured them saying, “The church loves our children as they are.”

Source: Pope Francis to parents of L.G.B.T. children: ‘God loves your children as they are.’ | America Magazine