More Pope Francis news. This man’s rapid departure from age-old Catholic dogma is bringing the world closer to ecumenism in a faster fashion than any other man or philosophy I’ve ever seen. Amazingly bad news just keeps coming from the Vatican 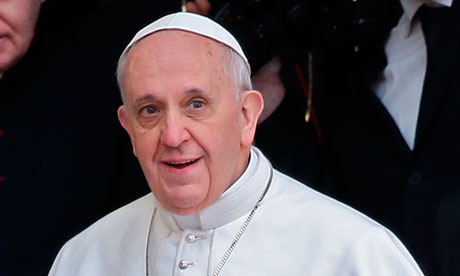 Pope Francis will consecrate the world to the Immaculate Heart of Mary on October 13. The consecration will take place as part of a pilgrimage that will bring thousands of members of groups promoting Marian piety to the Vatican.

The statue of Our Lady of Fatima is scheduled to travel to Rome on October 12. It will be only the 11th time since the statue was made in 1920 that it has been removed from the Portuguese Marian shrine.

Pope Francis and the pilgrims will welcome the statue to St Peter’s Square during an evening prayer service on October 12. The statue will then be taken to the Rome Shrine of Divine Love, where the Diocese of Rome plans an all-night vigil.

The statue and the pilgrims will return to St Peter’s Square on October 13 for the recitation of the rosary and Mass with Pope Francis. In a press statement, the directors of the Fatima shrine said Pope Francis will consecrate the world to Mary during the event. (source)
—————–

First, this is idolatry in every sense of the word. He is lifting up a man-made statue as an object of worship and as a ‘special sign.’ Secondly, this destroys any straight-face notion that the Catholics do not worship Mary (something they deny by parsing the word ‘venerate’, as in “We don’t worship her, we venerate her”.) The Mary here is of course the mother of Jesus who incubated the Savior in her womb, birthed the sinless Son, and raised him with Joseph until Jesus became of age.

But third, the hubris contained in Francis’s seemingly humble action betrays the man’s pride. Or perhaps his realism- the pope is the only absolute monarch in the world, accountable to no one for as long as he holds the office. Francis’ action is intended to ‘consecrate the world’. According to the Christian Apologetics and Research Ministry, Consecrate means

For the Pope to believe he has the power to set the WORLD apart for any use that he chooses is hubris on the order of the pride that satan himself has, believing he will exalt himself above God’s holy mountain. (Isaiah 14:4).

This is not the first time Pope Francis has been in the news. You remember he became Pope under extremely unusual circumstances. The previous Pope, Benedict, suddenly and abruptly resigned, the first pope to do so in 600 years. This opened the papal monarchy to another candidate. That man was Francis. The resignation event occurred in February of this year. The papacy of Francis began in mid-March of this year, 2013.

The second unusual thing about Francis is that though he has been pope only for 7 short months, he has upended and subverted the entrenched Catholic dogma up on its ear. He has made the news almost constantly since ascending his papacy by uttering liberal policies and teaching what has for thousands of years been anathema to Catholics. For example:

Pope Francis On Gays: Who Am I To Judge Them?

Pope Francis: Gays, Abortion Too Much Of Catholic Church’s Obsession

Pope says there is no need to convert anyone

This is all extraordinary given that if nothing else, the Vatican has always adhered to their false religion and dogma fiercely. It is also unusual in that the Vatican never takes rapid steps or makes abrupt turns. Yet Francis has only been in office for 7 months and seemingly not a monthy gos by without reading of an amazing about-face from the Vatican.

Take note of the rapidity of the changes Francis is bringing. And always remember that the Catholic religion is a false religion, therefore we are not surprised when the world acts like the world.

Pope Francis’s sudden appearance onto the world stage, his wide promotion as a faithful, humble man, and how clearly he speaks the world’s language is all extremely interesting as it is happening at this juncture in time.

I turn from pope-watching and look instead for my Savior. Is He due at the appointed hour soon to collect His bride? As the world falls further into ecumenism, faithlessness and Christ-less despair, does this mean the soon appearance of our beloved Groom? One hopes so. Even so,

“But our citizenship is in heaven, and from it we await a Savior, the Lord Jesus Christ, (Philippians 3:20)

And we wait, patiently enduring, watching the extraordinary events on earth, knowing a better future awaits those who love him.