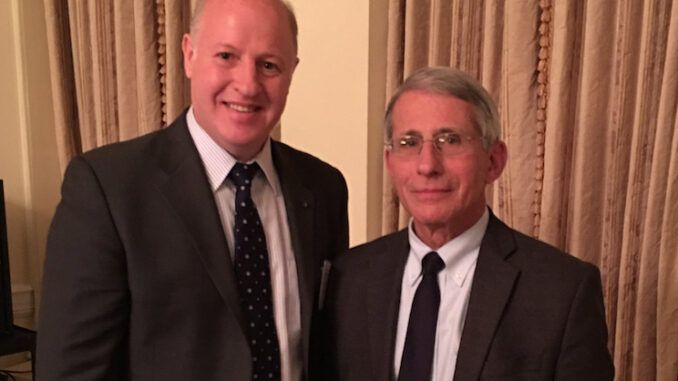 EcoHealth Alliance President Peter Daszak, who conducted gain of function research at the Wuhan Institute of Virology in China, has confessed to being a CIA agent working on behalf of the Deep State, according to bombshell new claims.

EcoHealth Alliance President Peter Daszak, who conducted gain of function research at the Wuhan Institute of Virology in China, has confessed to being a CIA agent working on behalf of the Deep State, according to bombshell new claims.

According to EcoHealth Alliance Associate Vice President Dr. Andrew Huff, Daszak personally confessed to him that he was secretly working on behalf of the Central Intelligence Agency and declared that EcoHealth Alliance was a “CIA front organization.”

Huff received his Ph.D. in Environmental Health specializing in emerging diseases before becoming an Associate Vice President at EcoHealth Alliance, according to report by journalist Kanekoa.

Infowars.com reports: While working with the global scientific nonprofit, he was tasked with developing “novel methods of bio-surveillance, data analytics, and visualization for disease detection.”

EcoHealth Alliance, headed by Daszak, and financed by several US government agencies, partnered with Dr. Ralph Baric of the University of North Carolina and Dr. Shi Zhengli of the Wuhan Institute of Virology to conduct gain-of-function research on bat-borne coronaviruses in Communist China prior to the initial outbreak of COVID-19.

The revelations added fuel to concerns that coronavirus pandemic originated from that very lab, which Daszak aggressively maintains is not true.

Through a series of tweets posted on January 12, Huff wrote:

For the Record: In 2015, Dr. Peter Daszak stopped me as we were leaving work late at night, and asked me if he should work with the CIA. I was shocked given my experience in security. Over the next 2 months he gave me updates on 3 separate occasions about his work with the CIA.

When he asked me the question I stated “Peter, it never hurts to talk with them and there could potentially be money in it.” Meanwhile, I was cringing that he told me this, in a non classified setting (a SCIF), to a person that was not “read-in,” and to a uncleared person (me).

Then, over the next two months at the break area while getting coffee, or between meetings, he stated that they were interested in the places that we were working, the people involved, the data that we were collecting, and that the work with them was proceeding.

Then, Huff detailed his belief that Daszak’s EcoHealth Alliance was a “CIA front organization.” The statement continued:

Looking back, I now believe that EcoHealth Alliance was a CIA front organization to collect viral samples and to collect intelligence on foreign laboratory capacity. There was no way that the data collected or the models being developed, could predict transmission or pandemics.

Contextually, EcoHealth was barely solvent and it was common place to lay off employees with the ebb and flow of federal and private funding. Peter would do anything or say anything to obtain funding. Intelligence organizations often target people in financial distress.

From the CIA’s perspective, it was a great plan in my opinion, if what Dr. Peter Daszak said was true. Since it was common place for Peter to lie, I didn’t necessarily believe him when he told me. However…

Based on the past two months of the US government spending millions of dollars surveilling me and MTRX INC employees, including military aircraft, attempting to destroy my house, bugging everything in it, stealing my property, and hacking all my devices, I believe that the worst is likely true.

Prior to the public statement earlier that morning, Huff took to Twitter and claimed “members of the US Government IC community have been harassing me, broke into my house, stole hard drives, and installed electronic surveillance devices throughout my house.”

This, Huff said, suggests to him that Daszak was not lying to him when he apparently explained that he had been working for the CIA.

“EcoHealth Alliance is likely a CIA front organization. COVID-19 is the biggest intelligence failure since 9/11,” wrote Huff. “The coverup is the greatest in US History, far worse than the Iran-Contra scandal. The truth is coming out and I will testify this under oath.”

In a separate series of posts, Huff said that he “wouldn’t be surprised if the CIA/IC community orchestrated the COVID coverup acting as an intermediary between Fauci, Collins, Daszak, Baric, and many others. At best, it was the biggest criminal conspiracy in US history by bureaucrats or political appointees.”