Perpetual Futility, or Triumph of Imagination?

Perpetual motion is a term used to describe a machine that can operate indefinitely. It is also sometimes used to define a device that produces more energy than it uses, no matter how long it is able to operate. Most scientists and scholars agree that perpetual motion violates either the first or second law of thermodynamics or in fact breaks both of them. Some devices which don’t break these laws but get their energy from an obscure source have been called perpetual motion machines, but really aren’t. 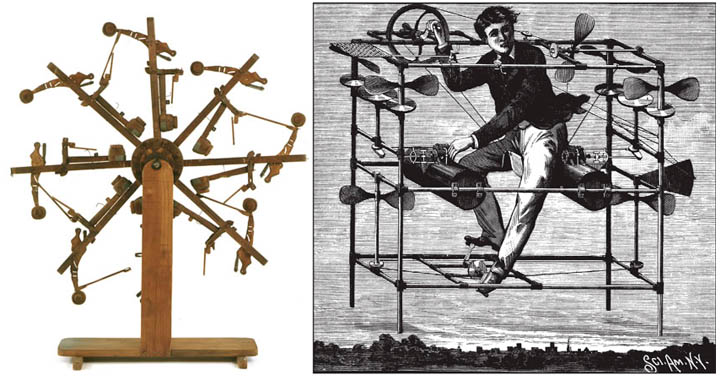 In terms of the laws of physics, at least as we understand them in the early twenty first century, perpetual motion machines are impossibilities. However, a wide variety of machines, theories and devices have been developed and proposed over the years. Here’s a look at some of the more interesting ones here at Dark Roasted Blend. 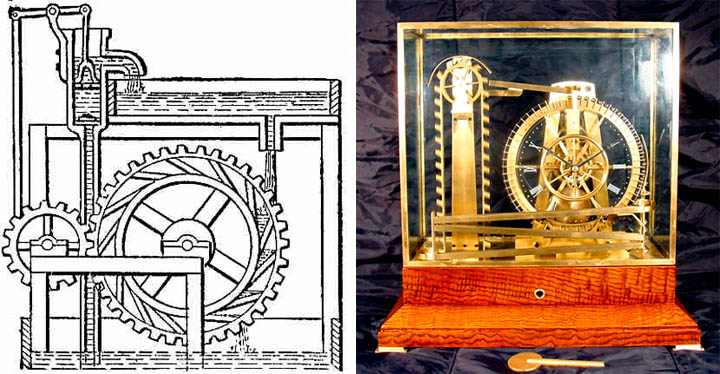 Bhaskara’s wheel dates from the mid-twelfth century and was invented in India by the mathematician Bhaskara. The wheel’s curved or tilted spokes were partially filled with mercury. Once the wheel started spinning, mercury flowed across the spoke and the wheel would continue spinning, for a while at least.

The Bibliotheque Nationale in Paris houses the drawings of Villard de Honnecourt, which date from the middle of the thirteenth century. His sketches feature various lifting devices, a water-powered saw, examples of automata and a perpetual-motion machine, although it’s not clear if de Honnecourt designed any of these himself or was describing objects he’d seen on his travels around Europe: 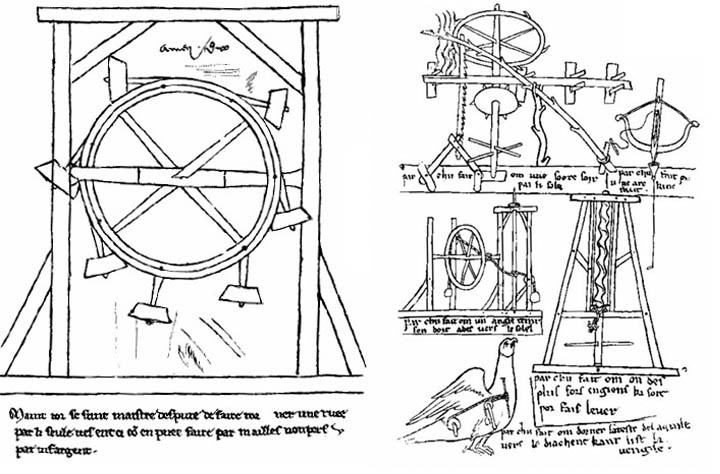 Also in France, in 1269 Petrus Peregrinus de Maricourt devised one of the earliest perpetual motion machines making use of magnets. The toothed wheel passes close to a lodestone. The teeth are thus repelled by one pole then attracted by the other one, maintaining the motion (left image below): 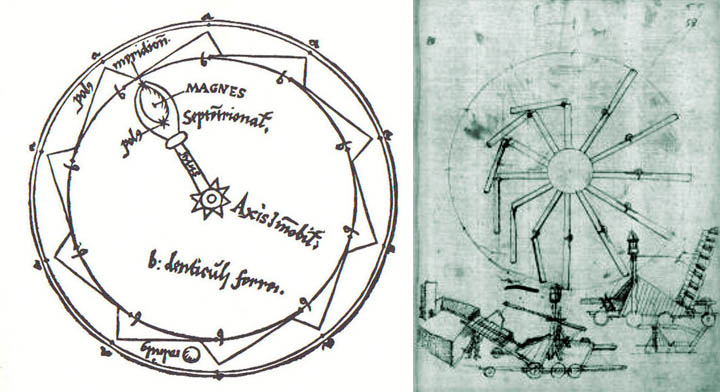 Right image above: Mariano di Jacopo detto il Taccola was an Italian artist and engineer working in the early Renaissance. His technological writings are filled with drawings of proposals for machinery and devices. This wheel is from the early decades of fifteenth century. Here is another great image of perpetual wheel – click here.

Robert Fludd’s Water Screw from 1618 was designed for driving millstones. This was probably the first time someone had tried to show how a perpetual motion machine might be able to do something that was actually useful (left image below): 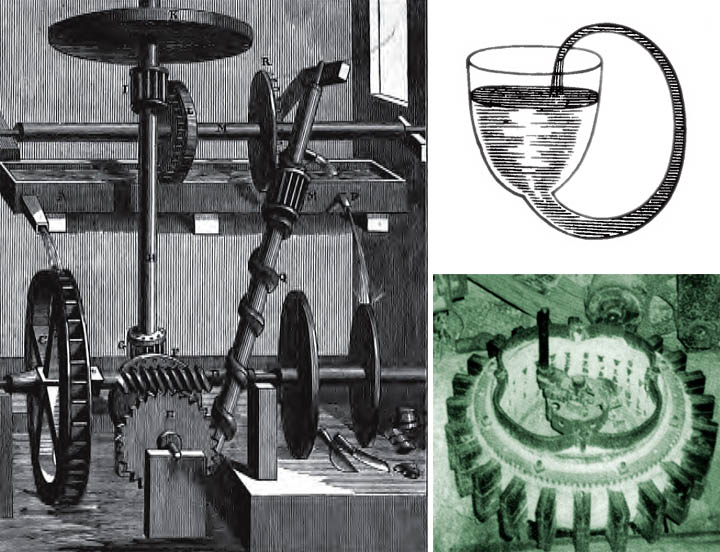 From later in the seventeenth century, we have this apparently self-flowing flask invented by Robert Boyle (top right image above). It looks as if it refills itself using siphon action, although a siphon’s input is usually higher than the output, so this doesn’t strictly fit the accepted perpetual motion criteria.

Also in the image above (bottom right) you can see Edward Leedskalnin’s magnetic generator, part of his Perpetual Motion Holder research. 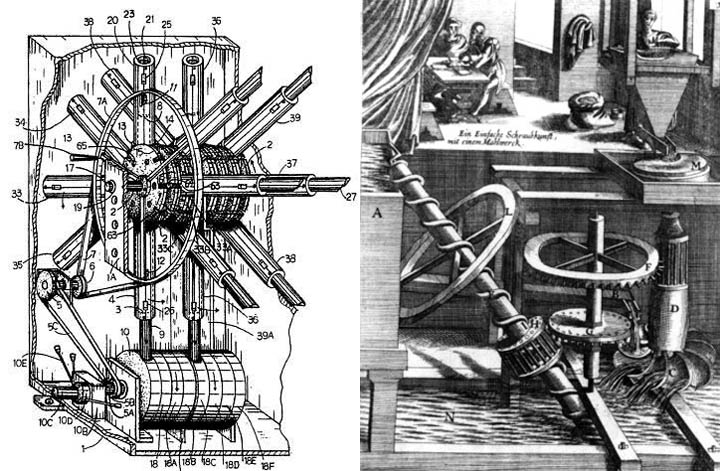 (left image via, right via)

In Germany in the early eighteenth century, Johann Bessler built Orffyreus’s Wheel, that he claimed was self-moving. At the time, following a great number of tests and official inspections, it was thought to have been the genuine article. Apparently it could do heavy work and even ran for fifty four days in one test. Today, experts don’t consider the wheel to have been capable of perpetual motion, but even now, apart from the fact that the wheel was known to have used weights in some way, no one really agrees on what might have been the power source for Orffyreus’s Wheel: 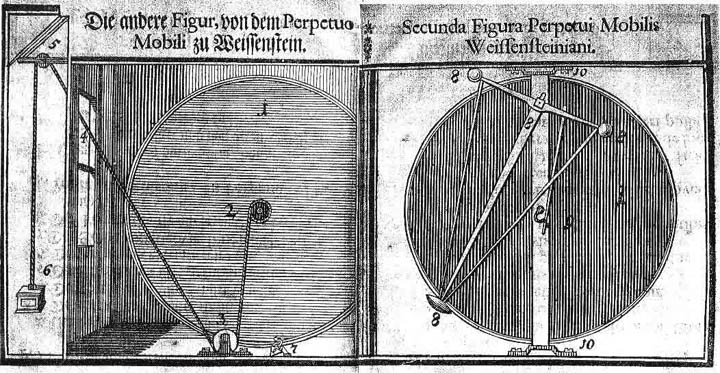 A so-called generator invented in Philadelphia in 1812 by Charles Redheffer was supposed to be able to power other machinery. However, it was exposed as a fraud when it was discovered that the device was secretly connected to another machine in an adjoining room (left image)…Right image: Sir William Congreve designed this device, which was believed to be capable of perpetual motion, in 1827: 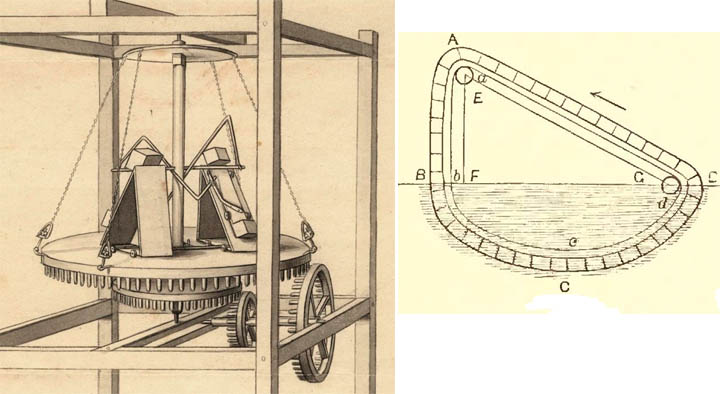 The Crookes Radiometer, also called the light mill, was invented in 1873 by chemist Sir William Crookes. The glass bulb contains a partial vacuum and vanes on the spindle. These spin when exposed to light, increasing in speed with the brightness of the light and scientists have long debated what causes the rotation: 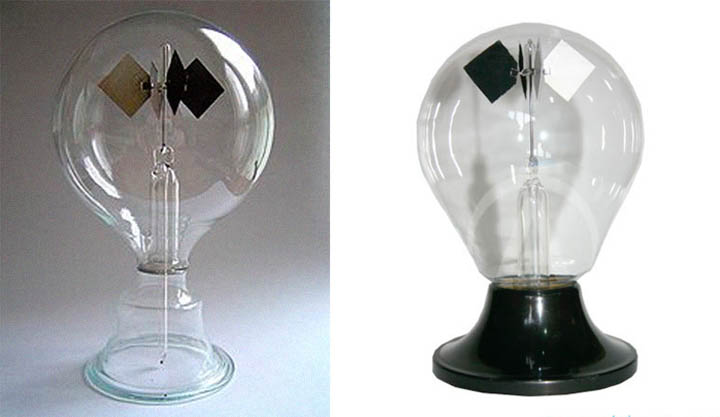 James Cox invented a clock called Cox’s Timepiece in the 1760’s. Although heralded as a perpetual motion machine, the clock’s power source is actually derived from changes in the planet’s atmospheric pressure, using a mercury barometer. It works in much the same manner as other mechanical clocks, except that it doesn’t need winding. The first clocks powered by atmospheric fluctuations date from the early seventeenth century and one was owned by England’s King James I: 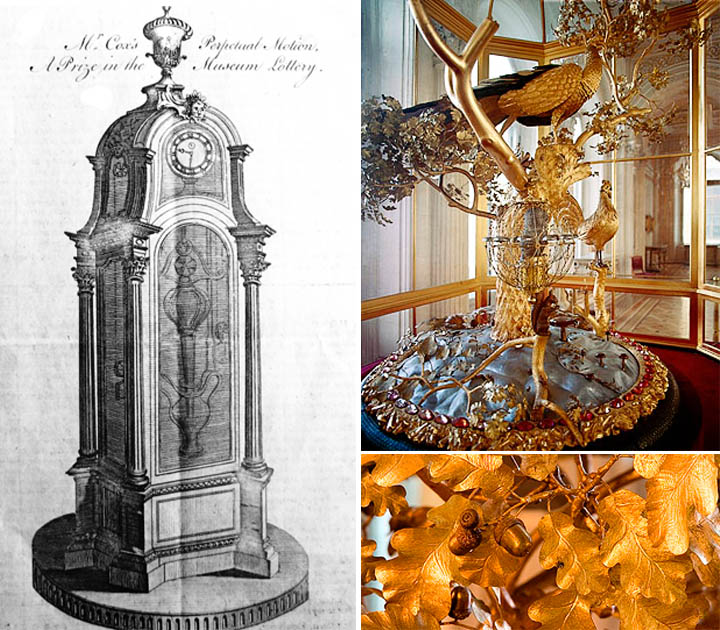 John Joseph Merlin worked with James Cox on “perpetual motion machine”. This is a replica of Merlin’s 1776 Band Clock, made by Trevor Beatson of Calgary, Canada, which won a gold medal from the National Association of Watch and Clock Collectors: 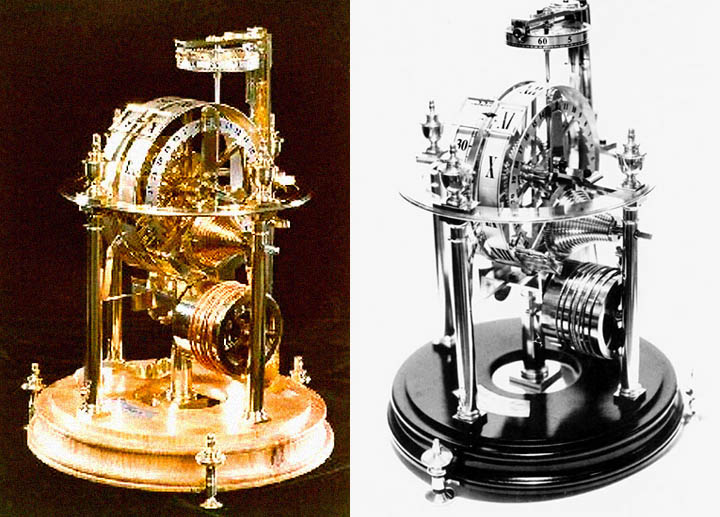 Atmos is a well known brand of mechanical clock first produced in Switzerland by Jean-Leon Reutter in 1928. Like Cox’s timepiece, the clocks are powered by environmental changes and don’t need to be wound manually, often running continuously for years: 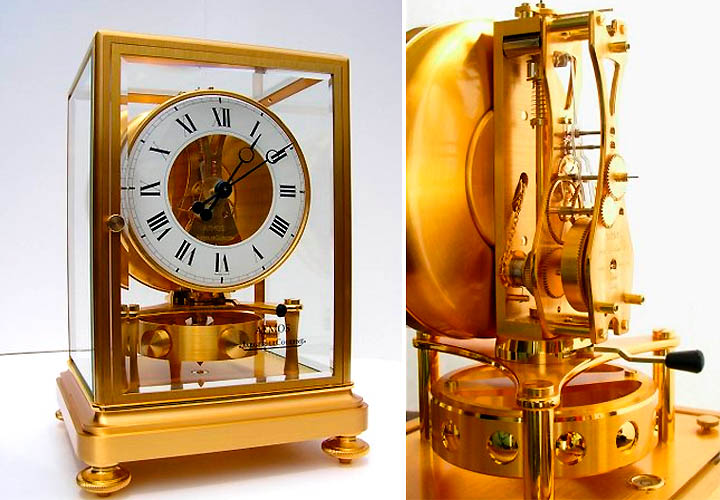 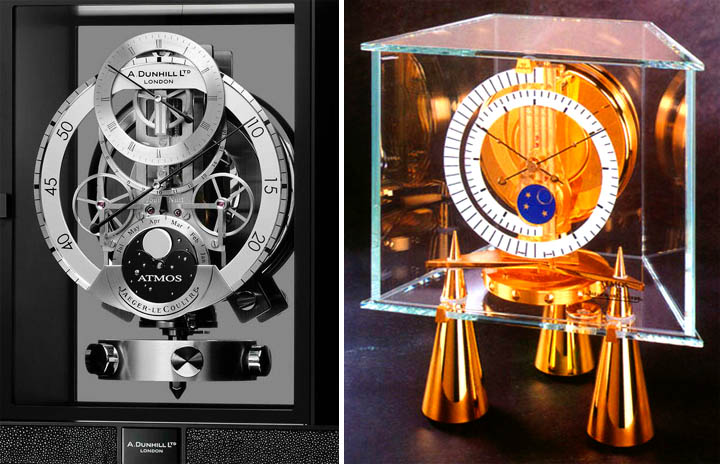 Here we have the Reidar Finsrud perpetual motion machine, in which a collection of magnets are employed to attract a steel ball. Apparently, it hasn’t been determined just how this thing can actually work, since the only energy sources are the magnets. In theory, it might be able to run for years or decades and could be an excellent source of electricity, who knows? –

Several ‘free energy’ machines are supposed to have been developed by engineer John Bedini. However, these devices have not been officially investigated by independent scientists. This site has some schematics available as a “gift to the people”:

Back in 1934, this monstrosity rail car ran on “air-electric perpetual drive” (more info): 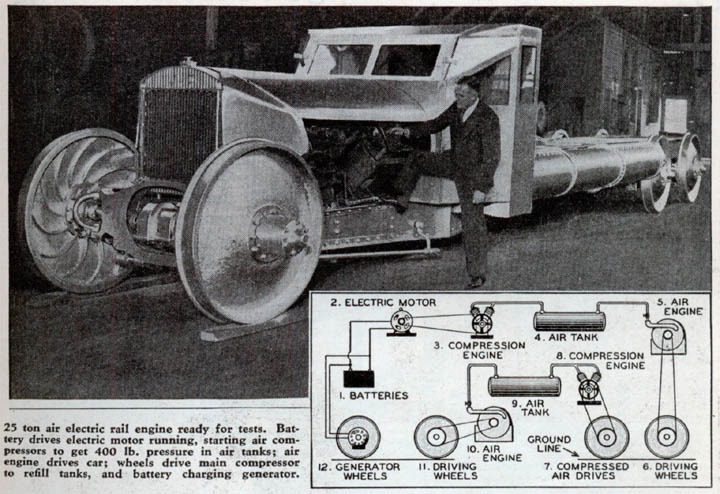 This is the N1 Homopolar Generator, which is supposedly capable of ‘taking power from the cosmic energy field which always surrounds us’. Not sure how that process actually works, but that would certainly make it a candidate for a perpetual motion device, wouldn’t it? (left image below):

Right image above: in the 1980’s, Joseph Newman’s Machine was claimed to produce more power than it needed to operate, one of the qualities usually bundled together with perpetual motion. Apparently, Newman’s machine could charge any batteries it was attached to and work for longer than it would have been able to if only using battery power. However, since it does actually need energy to create additional energy, it isn’t strictly a perpetual motion machine.

The Searl Effect Generator is described as ‘an open system energy-converting machine that uses a drop in temperature in the surrounding air and the device to convert ambient energy to electricity’. Not sure if it actually works, but it looks pretty interesting:

“The Searl Effect was discovered by John Roy Robert Searl in 1946. The Searl Effect is based on magnetic waveforms that generates a continual motion of magnetized rollers around magnetized rings. Energy conversion while operating involves processing of random quantum fluctuations and kinetic energy within the atomic lattice into coherent currents of electron pairs formed between two-dimensional boundaries of different type materials.” (source) 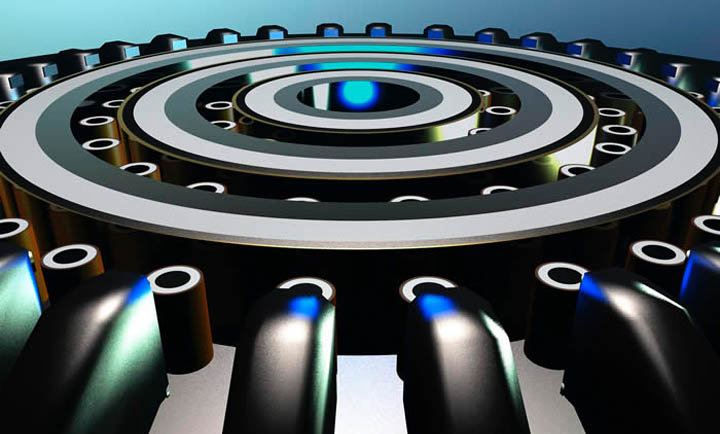 In Canada, Perepiteia is a perpetual motion device proposed by Thane Heins, making use of electromagnetic force. Tests showed that motors connected to the machine increased their speed and created energy more efficiently, although scientific opinion is still sharply divided about the validity of the project (there is also another one in Ireland): 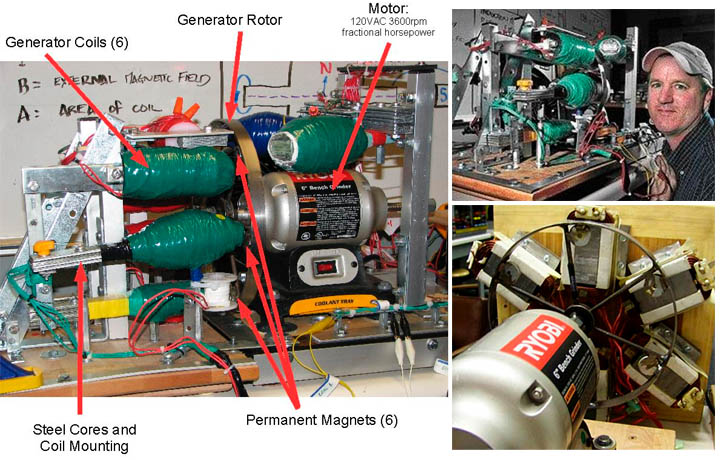 China is also building “impossible space drive” (also known as Roger Shawyer’s ‘electromagnetic relativity drive’). It is basically a thruster which uses no fuel except an electricity supply (more info): 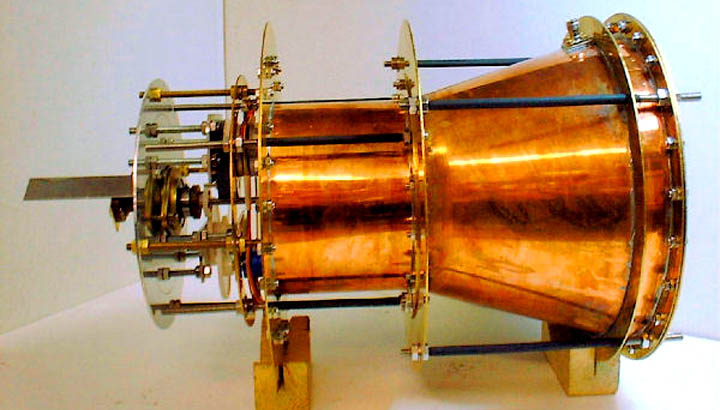 The Perendev Motor also runs on magnetic force or magnet repulsion. Working models have actually been constructed, admittedly with mixed results, but the theory is considered to be worth pursuing and research continues:

The idea of perpetual motion and the urge to build the devices capable of overcoming the Second Law of Thermodynamics are very much alive today: it is perhaps quintessential visionary exercise, as much doomed as it is gloriously divine. 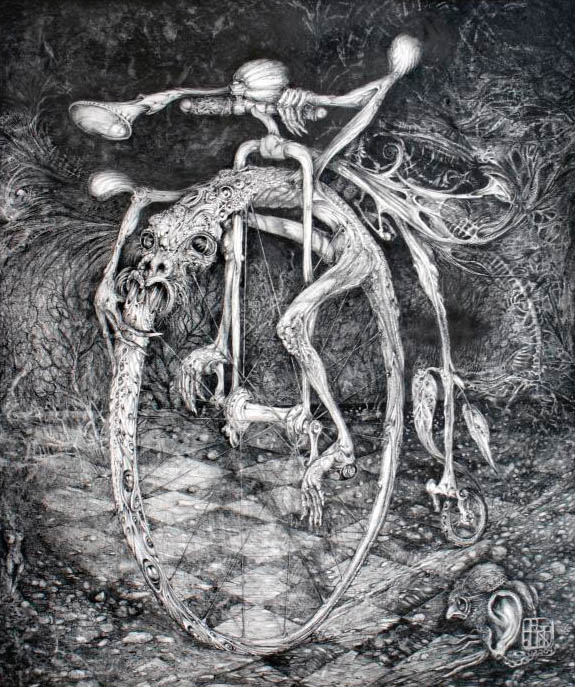