‘It is not really surprising. The Welsh government has shown itself to be very authoritarian throughout this pandemic,’ 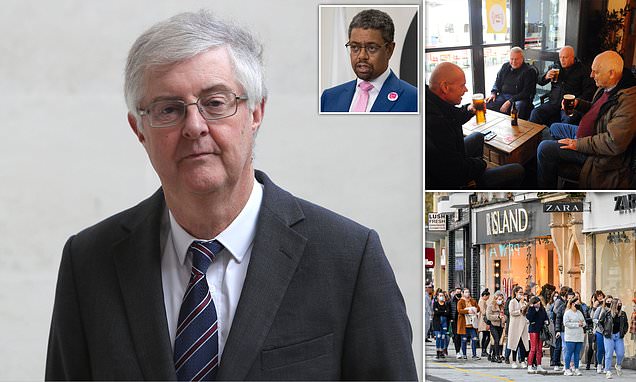 Downing Street played down the idea of giving people who have had vaccines more freedoms, saying it would not be fair while the jabs were still being distributed according to priorities.

But Tory MP and former minister David Jones, who represents Clwyd West, said it was more evidence of the ‘authoritarian’ streak in the Welsh government.

‘It is not really surprising. The Welsh government has shown itself to be very authoritarian throughout this pandemic,’ he told MailOnline.

‘They have imposed a lot more restrictions than England.

‘You would hope that these cards are not expected to be carried, and if people want to throw them away then they should be entitled to.

‘We don’t want to get to the stage where government are requiring people to carry cards.’

Grey Collier of campaign group Liberty said: ‘Any form of immunity card raises more questions than it answers. It is currently unclear how these cards will be used, and whether people could be asked to use them to prove they have immunity.

‘Once cards like these have been created it would be easy for their use to be extended so they can be used like an immunity passport. This could result in people who don’t have a card potentially being blocked from essential public services, work or housing – with the most marginalised among us hardest hit.

‘This has wider implications too because any form of immunity passport could pave the way for a full ID system – an idea which has repeatedly been rejected as incompatible with building a rights-respecting society.

‘We have always supported proportionate action to protect lives, but that must not come at the expense of our rights and freedoms.’

Source: People in Wales will get ID-style card to show they have been vaccinated for coroanvirus | Daily Mail Online