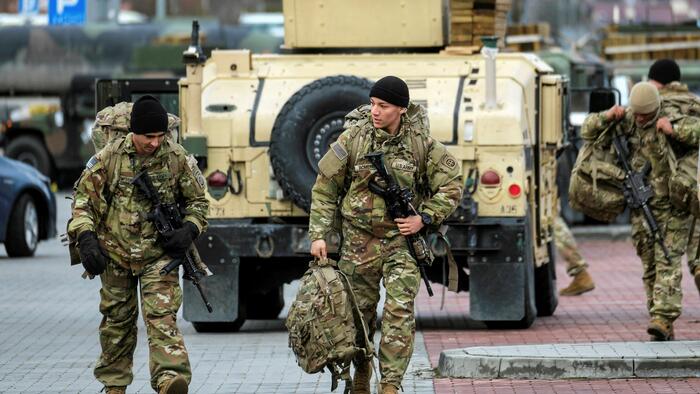 Two bombshell reports by the Associated Press and Washington Post Monday and Tuesday have confirmed that the United States has boots on the ground in the Ukraine conflict. Crucially, these troops are performing tasks separate from mere embassy security.

The American troops are said to be performing “inspections” of US weapon caches after last week the State Department and Pentagon unveiled a new plan to track US-supplied weapons in efforts to implement accountability for the billions of dollars worth of arms and ammunition transferred to Ukrainian forces since near the start of the war eight months ago.

Source: Pentagon Confirms US Boots Are On The Ground In Ukraine

A Pentagon briefing confirmed this “small” contingency of troops has been advised to not do inspections “close” to the front lines of fighting:

The official, who spoke on condition of anonymity to provide a military update, would not say where the inspections are taking place or how close to the battlefronts the U.S. troops are getting. The official said U.S. personnel can’t do inspections “close to the front lines,” but said they are going where security conditions allow.

There have already been “several inspections” overseen by U.S. Defense attache and a US Office of Defense Cooperation team based out of the Ukrainian capital. The report underscores that “U.S. President Joe Biden has ruled out any combat role for U.S. forces inside Ukraine.”

However, what’s clear is that despite the White House’s ruling out of “combat” troops, this is the start of perhaps inevitable ‘mission creep’ – as has been seen in other conflict zones (such as Syria). If US troops are doing inspections of Ukrainian arms and ammo, and presumably Russia is currently targeting any and all Ukrainian military bases, this puts American troops and assets in Russia’s crosshairs, greatly increasing the possibility that the US and Russia could stumble into a direct shooting war.

In a follow-up Tuesday report, The Washington Post detailed the following:

U.S. monitors have conducted in-person inspections for only about 10 percent of the 22,000 U.S.-provided weapons sent to Ukraine that require special oversight.

U.S. officials, who spoke on the condition of anonymity to provide details that have not been made public previously, said they are racing to deploy new means for tracking weapons seen as having a heightened risk of diversion, including Stinger surface-to-air missiles and Javelin antitank missiles, amid what they describe as Ukraine’s “super hot conflict.”

National Security Council spokeswoman Adrienne Watson says the Ukrainians have been cooperating as willing partners in weapons accountability and implementing measures ensuring proper chain of custody. “While we recognize the unpredictability of combat, the United States and Ukraine have cooperated to prevent illicit weapons diversion since Russia’s further invasion began earlier this year,” she said.

Like with Syria before, it’s likely the White House and Pentagon will carefully avoid acknowledging wording like “boots on the ground” in their press statements…

Oh wow… US boots on the ground in Ukraine? Delivering solutions to problems you created in the first place… so you can create more problems and bring more "solutions…" Rinse, repeat. https://t.co/zbQpsid5LK

The initiative is broadly being seen as part of Biden admin efforts to assuage Republican anger in Congress, after complaints have grown louder over the unaccountable “wild West” way in which Pentagon weapons have proliferated in Ukraine – as even CNN months ago underscored.

This week Finland has been among the first European countries to document the spread of West-supplied weaponry outside of Ukraine’s borders and into the hands of criminal elements, as we detailed previously. “Weapons shipped [by various countries] to Ukraine have also been found in Sweden, Denmark and the Netherlands,” Finland’s federal National Bureau of Investigation chief Christer Ahlgren was quoted by national broadcaster Yle as saying.

Russia has already long warned it will attack foreign weapons shipments, transport convoys, and warehouses found in Ukraine… but how long before Russian forces target American military inspectors on the ground behind the front lines? The longer the grinding conflict drags on, the greater potential for such a disastrous scenario, whether intentional or not.

While at this point we could rightly call the Ukraine conflict a “proxy war” between Russia and US-NATO, all signs point to a steady slide into direct conflict. Now that Pentagon “inspectors” are confirmed on the ground in Ukraine (notably without any Congressional vote), expect the White House to vehemently deny that this marks any level of an escalation as far as Washington’s direct involvement… again, despite the evident danger of American soldiers placed in “harm’s way” – potentially being under Russian bombs. 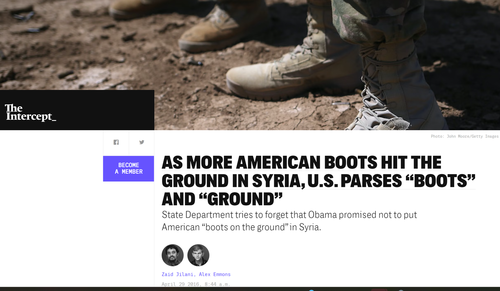