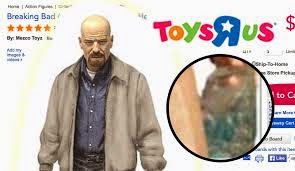 The American toy shop Toys “R” Us has been criticised by parents for selling a range of drug dealer dolls based on the television seriesBreaking Bad.

One of the six-inch figures, which sell for $17.99 (£11.16), even portrays a dealer clutching a gun, with a detachable bag of cash and blue rocks of the drug crystal meth.

Others are dressed in Hazmat protective suits, with a description reading: “as [the] Breaking Bad action figure stares at you from inside his collector friendly clamshell package, he dares you to make your move.”

Breaking Bad is based on the character of high school chemistry teacher Walter White, played by Bryan Cranston, who goes into business with a former student, Jesse Pinkham, portrayed by Aaron Paul, producing and selling crystal meth in order to make money for his family before he dies from terminal cancer …. http://www.telegraph.co.uk