Sir Patrick Vallance and Chris Whitty have said they ‘regret’ frightening people with a doomsday dossier that forecast 4,000 Covid-19 deaths a day over winter and was used to justify a second national lockdown. 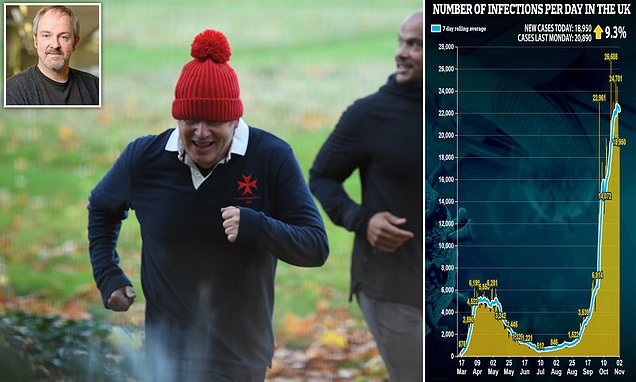 The chief scientific and medical officers made the comments today as they were hauled before MPs SAGE’s doomsday forecast that hospitals would be overrun with Covid-19 this month.

We didn’t mean to scare you: Chris Whitty and Sir Patrick Vallance defend their ‘4,000 deaths a day’ lockdown dossier and admit three-tier system WAS working – but not quickly enough to stop NHS running out of space by November 20

The chief scientific and medical officers made the comments today as they were hauled before MPs to defend SAGE’s modelling that also predicted hospitals would be overrun with virus patients by the end of this month.

During the grilling by members of the House of Commons Science and Technology Committee, Labour MP Graham Stringer asked Sir Patrick if he believed he had frightened people with the bleak deaths data presented during Saturday night’s press briefing.

The Chief Scientific Adviser said: ‘I hope not and that’s certainly not the aim… I think I positioned that as a scenario from a couple of weeks ago, based on an assumption to try and get a new reasonable worst-case scenario. And if that didn’t come across then I regret that.

‘Those figures were ones done by major academic groups based on those assumptions and, in the spirit of trying to make sure that things are shared and open, they are the things that we have seen [in the data so far], and it’s important and I think people see that.’

The experts also admitted the localised, three-tier lockdown approach – only introduced on October 14 – was starting to drive down the R rate and slow the spread of infections, particularly in northern hotspots which had been subjected to ‘Tier Three’ restrictions.

But Professor Whitty claimed the measures were not working fast enough to counteract a mid-September surge in infections which has triggered a wave of hospitalisations that modellers believe will breach national hospital capacity by November 20.

The Chief Medical Officer said: ‘It is difficult to be absolutely confident about how far their effect [the tiered system] has gone. I am confident Tier Two has had an effect and that Tier Three has had a bigger effect. I am confident of that.

‘The communities in the North and Midlands in particular, obviously London too has went into a Tier Two and some parts of eastern England too, have responded remarkably to this. And because of that, I am confident the rates are substantially lower than they would’ve been if this had not happened.

‘But the early indications we have at the present is that this has not achieved getting the R below one – it has brought it much closer to one – but it is still doubling over a longer period of time.’

Professor Whitty also raised hopes that families will be able to spend Christmas together, saying there was a ‘realistic possibility’ of lockdown being eased after December 2. The Government has refused to fully commit to the end date in case the intervention does not have the effect it hopes and case rates remain high. But the chief medical officer said there was a good chance England will have moved into a ‘different state of play’.

It comes amid fears England may have jumped the gun with a second national lockdown after top scientists claimed the R rate has already dropped to the crucial level of one and that Covid-19 cases are actually ‘flatlining’.

King’s College London academics, who have been tracking the size of the coronavirus outbreak since the summer, argued infections were now ‘plateauing’ and there was a ‘slight fall’ in new cases across the UK last week.

Professor Tim Spector, the lead scientist behind the KCL study, revealed the latest R rate estimate on Twitter today, hailing it as ‘good news’. He has already questioned the need for a second national lockdown because the virus is ‘running out of steam’.