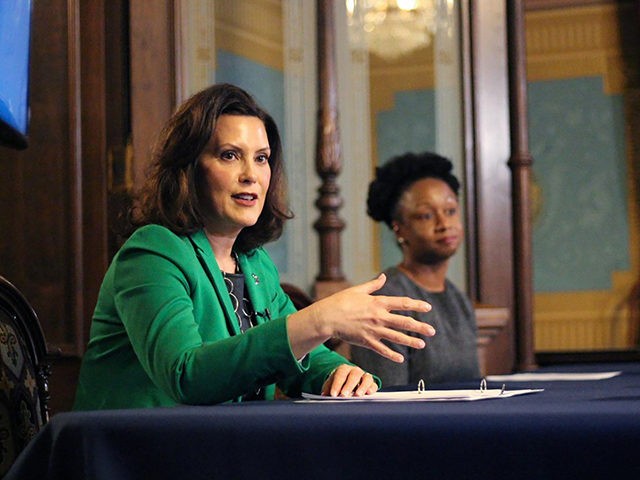 Recall Governor Whitmer. Her failure’s during the Covid-19 Corona Virus is causing more Michiganders to get sick. Closing and banning various non essential business’s and activities while leaving others open. Further promoting the pandemic. She has lied since day one with her #Fixthedamnroads which she has failed to do anything in this regards. The response to #PFAS was negligence and completely removing funding for #PureMichigan clearly shows her lack of anything positive for the State of Michigan.

Legally, the petition is meaningless, but it may indicate an appetite on the part of some Michiganders to remove their governor.

According to Ballotpedia, petitioners need to gather one-quarter of the number of votes in the previous gubernatorial election in order to trigger a recall process.

That equates to 1,062,647 valid signatures being required to put Whitmer’s recall on the ballot.

“Whitmer is more concerned about running for Vice President,” Dylan Raymond wrote as his reason for signing.

Mike Robinson echoed that theme: “She chooses her own political aspirations over the people of Michigan.”

She needs to stop telling people they can’t paint or plant flowers?? Are we supposed to sit at home and be depressed?? I mean… What happened to the land of the Free?? People can practice Social distancing and stay safe still.

Meanwhile, activists are planning a protest at the state capitol on Wednesday.

The Michigan Conservative Coalition has announced “a vehicle rally to surround the Capitol Building” on April 15 at 12:00 p.m.

“Michigan’s typical small business owners obey laws, but they may not notice the progressive agenda being pushed by our radical leftist Governor Whitmer,” said Rosanne Ponkowski, president of the Michigan Conservative Coalition.

“Dope shops are open, while cigar shops are closed.”

“We can get this rally done and stay within the social distancing guidelines,” said Marian Sheridan, cofounder of the group.