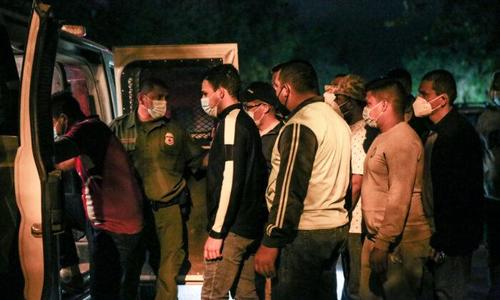 Source: Over 40,000 Mostly-Unvaccinated Migrants Released By Biden Skip Out On ICE Appointments | ZeroHedge

After the Biden administration just started releasing apprehended illegal immigrants without an official notice-to-appear in court, just 13% are reporting to an Immigration and Customs Enforcement (ICE) office as instructed.

Of the 50,000 migrants given ‘catch-and-release’ treatment according to Axios, this means that roughly 43,500 illegal immigrants are roaming around the United States.

And as the New York Post‘s Betsy McCaughey noted earlier this month – over 80% of migrants (over 30,000 in this case) are unvaccinated.

So the obvious question – how many people has Biden killed thanks to his catch-and-release border policy?

By the numbers: Just 6,700 migrants who crossed between mid-March and mid-July showed up at ICE offices as of Monday, one source briefed on Department of Homeland Security data told Axios.

Meanwhile migrants continue to be released. Rep. Henry Cuellar (D-Texas) told Axios that as of Monday, 7,300 migrants in the Rio Grande Valley sector had been released during the past week without court dates.

Over 20,000 illegal immigrants were arrested in the Rio Grande Valley in just one week, according to a Sunday tweet by the chief Border Patrol agent for that sector – a sign of the continued surge in illegal migration.

It's the hottest part of the summer and apprehensions are skyrocketing! #USBP Apprehensions surpassed the 1-million milestone in June.

In a statement to Axios, DHS spokesperson Meira Bernstein said “While individuals have 60 days to check in with ICE, many are proactively reaching out to ICE to begin their official immigration processing, including by receiving a Notice to Appear,” adding “Those who do not report, like anyone who is in our country without legal status, are subject to removal by ICE.”