The smoking gun evidence that annuls Obama’s presidency is Obama’s college transcripts regarding his application for and receiving of foreign student aid.  Obama’s college transcripts from Occidental College indicates that Obama, under the name Barry Soetoro, received financial aid as a foreign student from Indonesia as an undergraduate at the school. The transcript from Occidental College shows that Obama (Barry Soetoro) applied for financial aid and was awarded a fellowship (scholarship) for foreign students from the Fulbright Foundation Scholarship program – an international educational exchange program sponsored by the U.S. government.  Grants are available for U.S. citizens to go abroad and for non-U.S. citizens with no U.S. permanent residence to come to the U.S.  To qualify, for the non-US citizen scholarship to study in the U.S., a student applicant must claim and provide proof of foreign citizenship. This document would seem to provide the smoking gun that many of Obama’s detractors have been seeking.  The United States Constitution requires that Presidents (and Vice Presidents) of the United States be natural born citizens of the United States.

Obama hasn’t met and doesn’t meet the basic qualifications for the presidency – must be natural born citizen.

Obama has been named in dozens of civil lawsuits alleging he is not eligible to be president, with many filing a criminal complaint alleging the commander-in-chief is a fraud.

The filed indictments disputes Obama’s eligibility to be president under the U.S. Constitution which requires that eligible candidates for the United States presidency be “natural born” citizens.

U.S. soldiers including a general refuse to recognize Obama as their Commander in Chief since he is not a U.S. citizen. The soldiers have challenged Obama’s legitimacy by filing federal lawsuits against Obama.

On such soldier was U.S. Army Maj. Stefan Frederick Cook who was given orders to deploy to Afghanistan. Cook refused to deploy stating that he shouldn’t have to go because Obama is not a U.S. citizen and therefore not legally President and Commander in Chief.  The military revoked the orders with no reason given.  Speculation is that Obama would rather not see this thing go to court before a judge!

“In the 20-page document — filed with the U.S. District Court for the Middle District of Georgia — the California-based Taitz asks the court to consider granting his client’s request based upon Cook’s belief that Obama is not a natural-born citizen of the United States and is therefore ineligible to serve as commander-in-chief of the U.S. Armed Forces,” the Ledger-Enquirer reported.

Cook “would be acting in violation of international law by engaging in military actions outside the United States under this President’s command. … simultaneously subjecting himself to possible prosecution as a war criminal by the faithful execution of these duties,” Taitz stated.

Obama says he was born in Hawaii in 1961, just two years after it became a state. 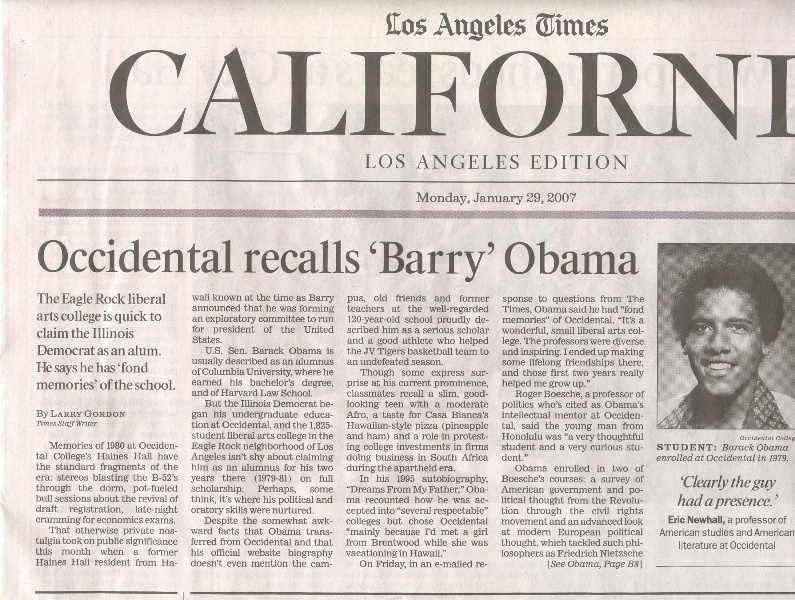 The first name of a child is always the same from birth. If throughout his childhood Obama went by the first name of Barry then legally his birth name would have to be Barry. In order to register any child for school an official birth certificate must be presented. To receive a government grant proof of citizenship and birth must also be submitted. All of the evidence is stating that Barack Obama’s legal first name is Barry not Barrack.

A biography of Obama’s Occidental College days states that when Obama was 18-19 he attended school as BARRY SOETORO. And it wasn’t until he met a girl by the name of Regina that Obama started using the name Barack.  Regina was the first to start calling him Barack.  There seems to be no record of Obama legally changing his first name from Barry to Barack.

While being sworn in as an attorney in the State of Illinois, Mr Obama had to provide his personal information under oath. He was asked, if he had any other names, he responded none. In reality, he used the name Barry Soetoro in an entry in the journal of the California assembly in reference to grants given to foreign exchange students. Mr. Soetoro/Obama clearly defrauded the State Bar of Illinois and perjured himself while concealing his identity. Anybody else would’ve been disbarred for this and the matter would’ve been forwarded to the district attorney for prosecution for perjury and fraud, however nothing was done to Mr. Obama. More importantly, why did he conceal his identity?

If Obama didn’t legally have his name changed from Barry to Barack then the birth certificate he passed to Congress is a fake, a forgery.  If his name was registered as Barry Soetoro even though Obama claims his real name is Barack Obama then Obama defrauded the state of California in order to receive college funding.  Obama knowingly presented a false document to the state wherein he claimed to be a foreign student in order to illegally acquire financial aid.

(a) Whoever knowingly makes any false statement under oath, in any case, proceeding, or matter relating to, or under, or by virtue of any law of the United States relating to naturalization, citizenship, or registry of aliens; or
(b) Whoever knowingly, with intent to avoid any duty or liability imposed or required by law, denies that he has been naturalized or admitted to be a citizen, after having been so naturalized or admitted; or
(c) Whoever uses or attempts to use any certificate of arrival, declaration of intention, certificate of naturalization, certificate of citizenship or other documentary evidence of naturalization or of citizenship, or any duplicate or copy thereof, knowing the same to have been procured by fraud or false evidence or without required appearance or hearing of the applicant in court or otherwise unlawfully obtained; or
(d) Whoever knowingly makes any false certificate, acknowledgment or statement concerning the appearance before him or the taking of an oath or affirmation or the signature, attestation or execution by any person with respect to any application, declaration, petition, affidavit, deposition, certificate of naturalization, certificate of citizenship or other paper or writing required or authorized by the laws relating to immigration, naturalization, citizenship, or registry of aliens; or
(e) Whoever knowingly makes any false statement or claim that he is, or at any time has been, a citizen or national of the United States, with the intent to obtain on behalf of himself, or any other person, any Federal or State benefit or service, or to engage unlawfully in employment in the United States; or

(f) Whoever knowingly makes any false statement or claim that he is a citizen of the United States in order to register to vote or to vote in any Federal, State, or local election (including an initiative, recall, or referendum)—

This evidence is sufficient to annul the presidency of Obama.   Official Occidental College transcripts registered with the state declares that Obama is an impostor.