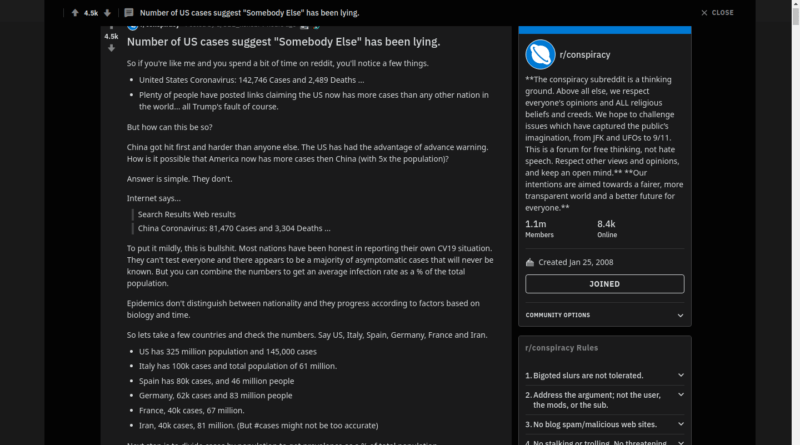 Number of US cases suggest “Somebody Else” has been lying.

So if you’re like me and you spend a bit of time on reddit, you’ll notice a few things.

But how can this be so?

China got hit first and harder than anyone else. The US has had the advantage of advance warning. How is it possible that America now has more cases then China (with 5x the population)?

Answer is simple. They don’t.

To put it mildly, this is bullshit. Most nations have been honest in reporting their own CV19 situation. They can’t test everyone and there appears to be a majority of asymptomatic cases that will never be known. But you can combine the numbers to get an average infection rate as a % of the total population.

Epidemics don’t distinguish between nationality and they progress according to factors based on biology and time.

So lets take a few countries and check the numbers. Say US, Italy, Spain, Germany, France and Iran.

Next step is to divide cases by population to get prevalence as a % of total population.

Now for the next step, we add these together to get an average. Doing so yields an average of 0.1034%.

Now for the last step, we take that number and apply it to China. This should give a very conservative result since China has had roughly a one month head start on everyone else.

If the US manages to keep the total number of cases below a million, they’ll be doing pretty good.

Also remember next time someone tries to make the US look bad, you’ll be in a much better position to judge that.

tldr; Numbers based on official stats/data from other countries suggest that the Chinese have been “less than perfectly honest” about their own corona situation.

Number of US cases suggest “Somebody Else” has been lying. from r/conspiracy