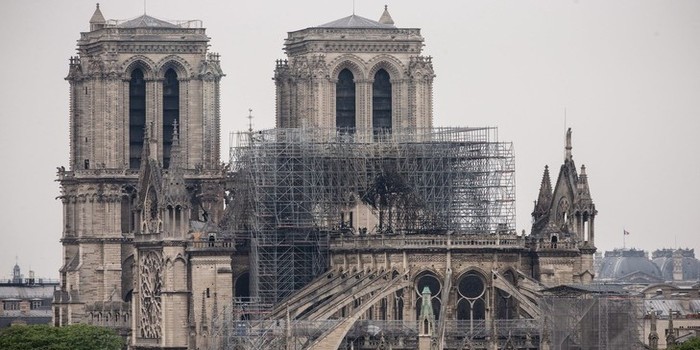 The world mourned after the iconic cathedral caught fire on the evening of April 15. More than 400 firefighters battled the flames, which quickly spread along the roof structure, causing burning timbers to collapse onto the ceiling of the vault below.
But initial assessment of the damage reveals that the vault damage has weakened the walls, which could fall in if weather conditions are poor enough.
After the fire, that destroyed the spire and large parts of the roof, Notre Dane is structurally unsafe and could collapse with strong winds, a new report by engineers has claimed.
Paolo Vannucci, a mechanical engineer at the University of Versailles claims the entire building could collapse if winds reach 55mph (88 km,/h).
Before the fire, the stone structure was strong enough to cope with gusts of 136mph, reports the Arts Newspaper.
The instability of the vaults has sparked major concern among experts that President Emmanuel Macron’s five-year target to restore Notre Dame could take too long.
The spire, which was completely destroyed in the flames, also provided extra strength to the rest of the building, which it now has to do without, Mr Vannucci added.
He stressed that strengthening and restoring the structural system of the cathedral should be the priority in the re-building process, which is being funded by multi-million pound donations from businessmen and philanthropists.
On May 10 the French Parliament, the Assemblee Nationale, passed a special legislation about the reconstruction of Notre Dame. It is due to be passed by the Senate on May 27.
Architect and former senior official at UNESCO Francesco Bandarin claims the bill does not address all the technical issues but will create a public body to oversee the process.