TIME Contributor: “A Jesuit friend in Paris who works in #NotreDame told me cathedral staff said the fire was intentionally set.” Tweet deleted

TIME columnist Christopher J. Hale @chrisjollyhale tweeted, “A Jesuit friend in Paris who works in #NotreDame told me cathedral staff said the fire was intentionally set.” and then he deleted the tweet after a few minutes. || #NotreDameFire #mepolitics pic.twitter.com/gPH04JCzSk

AND in June 2017, a jihadi attacked a police officer with a hammer at the Notre Dame cathedral.  Farid Ikken injured the officer with the hammer, and was found to be in possession of butcher knives. A video in which he pledged allegiance to the islamic State Iwas found at the Farid’s apartment.

RT: While the world watched in horror at Paris’ historic Notre Dame Cathedral erupting in flames Monday, the fire is only the latest in a series of incidents that have left social media awash in images of heavily damaged churches.

Notre Dame spokesman Andre Finot told French media: “Everything is burning, nothing will remain from the frame.” 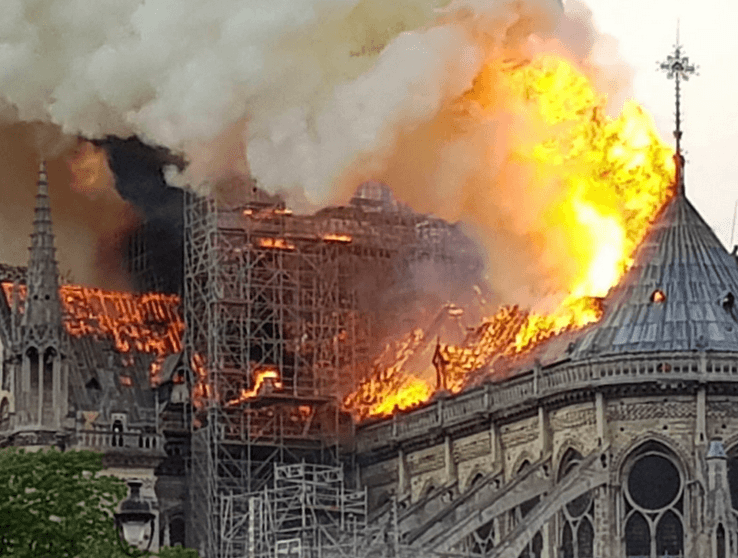 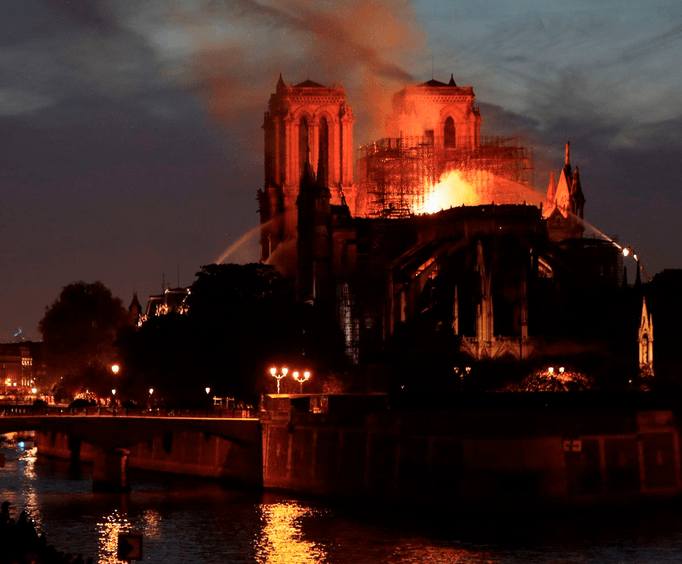 France has been hit with a string of fires at Catholic churches, some of which occurred alongside desecration of sacred objects and acts of vandalism. While the fire at Notre Dame appears to be an accident connected to renovations of the church, the image of the famous spire engulfed in flames is a hard hit on the historically deeply Catholic France, as well as Catholics all over who have seen their religion reeling from devastating scandals, cover-ups and attacks.

While Notre Dame is undoubtedly the most well-known landmark to be affected, Paris’ second largest church, Saint-Sulpice, briefly burst into flames on March 17, the fire damaging doors and stained glass windows on the building’s exterior. Police later reported that the incident had not been an accident.

“The images of flames in Saint Sulpice church this weekend are one more example of the violence committed against Catholics,” said Philippe Gosselin and Annie Genevard of France’s National Assembly, tying the incident into a wider trend of attacks on Catholic places of worship.

ANGER AS FRANCE SEES 10 CATHOLIC CHURCHES ATTACKED IN ONE WEEK – ‘GOD WILL FORGIVE, NOT ME

A SEVEN day spree of vandalism has seen Catholic churches targeted across France sparking fears of a fresh wave of anti-Christian sentiment in the country, including one church being defiled with human EXCREMENT.

PUBLISHED: 17:31, Wed, Mar 20, 2019 | UPDATED: 19:36, Mon, Apr 15, 2019:
At least 10 incidents of vandalism and desecration of Catholic churches have been reported across the Channel since the beginning of February. French Roman-Catholic newspaper La Croix International reported how the attacks on churches took place across France. Senseless acts included the desecration of altars, the defacing of Christ on the cross and in an extreme case, human excrement being spread across the walls of a holy place of worship.

According to the outlet, one of the first attacks was on February 4 at St. Nicholas Catholic Church in Houilles, Yvelines, where a statue of the Virgin Mary was found smashed on the ground.

The same church also had the altar cross thrown to the ground and the celebrant’s chair was damaged.

On February 5, an altar cloth was found burnt and crosses and statues torn down or disfigured at the recently refurbished Saint-Alain Cathedral in Lavaur, in south-central France. 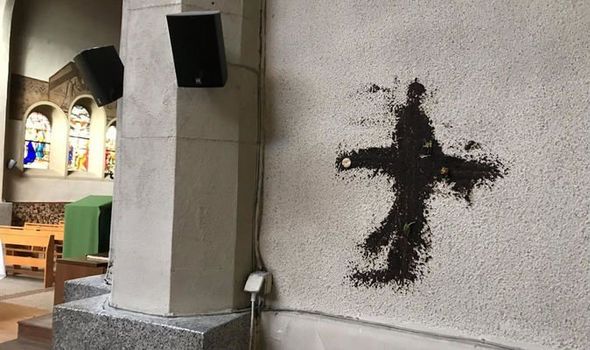 The fire was found early by a parish secretary and did not spread – but the altar and adjacent walls were badly damaged by smoke.

Following the incident, local district deputy Jean Terlier said in a statement: “I strongly condemn the vandalism of Lavaur Cathedral and I share the outrage aroused by this intolerable act.”

And Lavaur city mayor Bernard Canyon said: “God will forgive. Not me.”

On February 6, just a day after the Saint-Alain Cathedral incident, vandals at Notre-Dame des Enfants (Our Lady of the Children) church in Nimes broke into the tabernacle and scattered altar hosts on the ground.

According to local news reports, the vandals also drew a cross on the wall with human excrement and damaged other religious items in the church 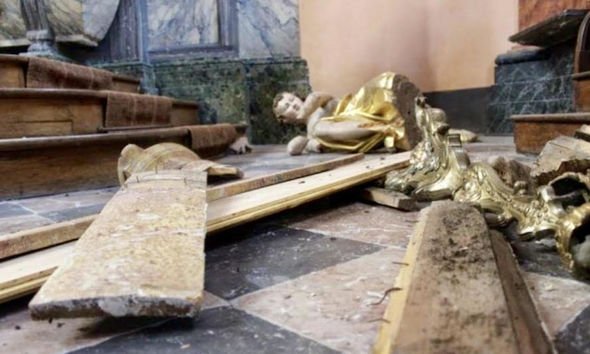 Bishop Robert Wattebled of Nimes said of the senseless attack: “This greatly affects our diocesan community.”

“The sign of the cross and the Blessed Sacrament have been the subject of serious injurious actions.”

“This act of profanation hurts us all in our deepest convictions.”

Day later, on February 9, a similar attack occurred at the Church of Notre-Dame de Dijon, Côte-d’Or, about 175 miles south-east of Paris.

The tabernacle was opened and the Eucharist scattered, while the altar cloth was soiled and a sacred missal was torn.

According to La Bien Public, Notre-Dame Father Emmanuel Pic believed the vandals wanted to show anger towards the “heart of the Catholic faith” as nothing of monetary value was stolen.

Father Pic said: “Nothing of value has been broken, but it is the intent that is very shocking. This is what characterizes profanity.”

And on February 10, St Nicolas in Houilles was subjected to another attack six days after the first mindless act of vandalism.

According to the Observatory on Intolerance and Discrimination Against Christians in Europe, the tabernacle was found thrown on the ground. However, a 35-year-old man later confessed to committing the act to police.

It is unclear if the attacks are related, but police investigations into the wave of attacks are ongoing.

In a statement to Twitter on February 13, Prime Minister Edouard Phillipe voices his outrage at the attacks ahead of a meeting with Catholic bishops from across the country. 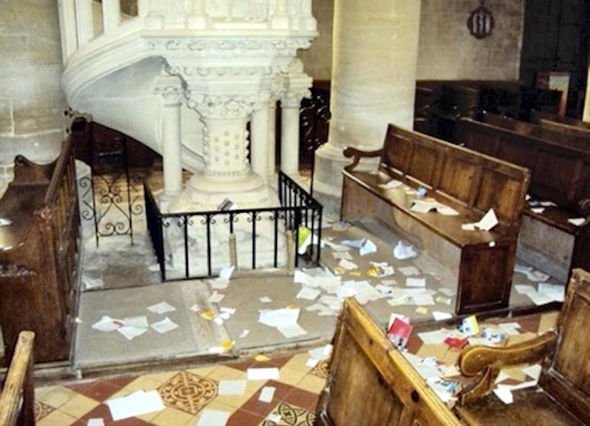 Mr Phillipe wrote: “In one week, in France, 5 degraded churches. In our secular Republic, places of worship are respected. Such acts shock me and must be unanimously condemned. I will tell the bishops of France at the meeting of the forum of dialogue with the Catholic Church,” he said.

The fresh wave of attacks come two years a campaign of Christian persecution against Catholic churches across France and Belgium in 2016.

The incidents were said to be carried out by the Islamic State (IS).

One of the most gruesome attacks included the murder of Fr. Jacques Hamel, who was killed by jihadists while holding Mass at a church in Saint-Etienne-du-Rouvray in Normandy.

THE TRUTH MUST BE TOLD