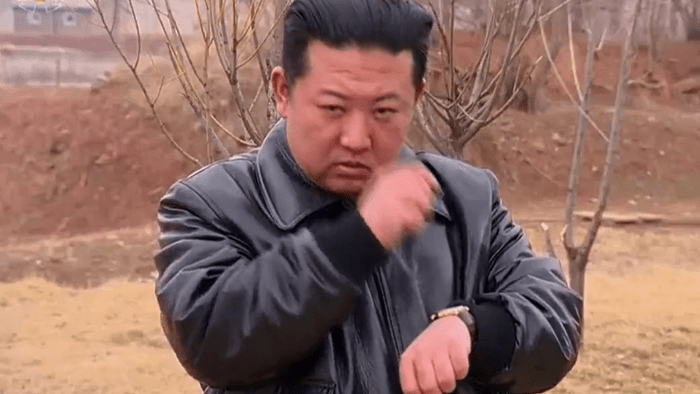 According to South Korea’s Yonhap news agancy, Kim Jong-un says North Korea will prepare for a long-term confrontation with the US after a major ballistic missile test Thursday, details of which are only now coming to light. Kim said he ordered the test of what on Friday is being described as a “huge, new intercontinental ballistic missile” (ICBM) because of the “daily-escalating military tension in and around the Korean peninsula” as well as the “inevitability of the long-standing confrontation with the U.S. imperialists accompanied by the danger of a nuclear war,” as cited in state news agency KCNA.

He oversaw the launch and subsequently on Friday state media released dramatic footage of what serves as confirmation of Pyongyang’s first ICBM test since 2017. With a leather jacket, sunglasses, and huge missile in the background – complete with slow motion, poorly acted hand gestures – the propaganda film has more the look and feel of a tacky B-movie, or even of a YouTube rapper music video. Watch:

BREAKING: North Korea's state-run television shows edited footage of Kim Jong Un guiding the test-launch of what the country referred to as the Hwasong-17 ICBM.

“The strategic forces of the DPRK are fully ready to thoroughly curb and contain any dangerous military attempts of the U.S. imperialists,” Kim said.

As The Hill describes of the newly issued Kim video:

The Korean Central News Agency (KCNA) reported that the missile had traveled close to 700 miles and had reached its highest altitude of close to 4,000 miles before it soon crashed into the water between Japan and North Korea, the news outlet noted.

Footage shown by North Korean state TV showed a dramatized missile launch with North Korean leader Kim Jong Un wearing a leather jacket and sunglasses while walking with officials in slow motion and looking at their watches seriously, according to a video shared by the AP.

The video shows the missile being rolled out and launched, later panning to Kim being joined by a group of men in gear clapping and appearing to praise him.

Western media reports are further dubbing this the biggest liquid-fueled missile that any nation has ever launched, which is causing alarm in Washington and at the UN.

As details emerged, White House press secretary Jen Psaki said in a statement, “This launch is a brazen violation of multiple UN Security Council resolutions and needlessly raises tensions and risks destabilizing the security situation in the region.”

More from this latest launch, said to be the 12th this year:

“This action demonstrates that the DPRK continues to prioritize its weapons of mass destruction and ballistic missile programs over the well-being of its people,” Psaki added. Source: North Korea Releases Hollywood-Style Video Confirming ‘Biggest Ever’ ICBM Missile Test