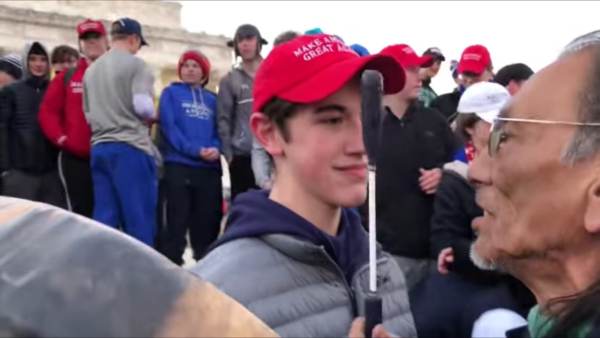 Lin Wood, the high-profile attorney representing Covington Catholic student Nick Sandmann, has filed a $250 million lawsuit against the Washington Post for defamation. The lawsuit claims that the paper “vilified” the student that was seen in a viral video being confronted by far-left activist Nathan Phillips because of the fact that he is white.

Filed in the U.S. District Court in Kentucky, the 38-page complaint says that “the Post wrongfully targeted and bullied Nicholas because he was the white, Catholic student wearing a red ‘Make America Great Again’ souvenir cap on a school field trip to the January 18 March for Life in Washington, D.C. when he was unexpectedly and suddenly confronted by Nathan Phillips (‘Phillips’), a known Native American activist, who beat a drum and sang loudly within inches of his face (‘the January 18 incident’).”

When asked by Gateway Pundit how this compares to the lawsuit Hulk Hogan filed against Gawker, Wood explained that his client has justification for a bigger claim.

“The Gawker case was an invasion of privacy claim. I believe Nick’s defamation case justifies an award much greater than the $150M awarded to Hulk Hogan. Nick is a minor. The media attacks on him are inexcusable,” Wood told TGP.The amount of the lawsuit is the same amount that Jeff Bezos, the world’s richest person, paid in cash for the Post in 2013 — the complaint notes.

“On January 19, 20 and 21, the Post ignored the truth and falsely accused Nicholas of, among other things, ‘accost[ing]’ Phillips by ‘suddenly swarm[ing]’ him in a ‘threaten[ing]’ and ‘physically intimidat[ing]’ manner as Phillips ‘and other activists were wrapping up the march and preparing to leave,’ ‘block[ing]’ Phillips path, refusing to allow Phillips ‘to retreat,’ ‘taunting the dispersing indigenous crowd,’ chanting ‘build that wall,’ ‘Trump2020,’ or ‘go back to Africa,’ and otherwise engaging in racist and improper conduct which ended only ‘when Phillips and other activists walked away.’” the complaint reads.

An internal investigation by the Diocese of Covington found that the students did nothing wrong — and even acted in a “laudatory” manner in the face of vile racist hate being spewed at them by the Black Israelites that Nathan Phillips was acting in “solidarity” with.

Wood has previously announced that there are over 50 celebrities, media outlets, reporters and politicians who may also be served with lawsuits.

“The View,” co-host Joy Behar: Media Smeared Covington Catholic Boys “Because We’re Desperate to Get Trump out of Office” – VIDEO

VIDEO: “WATCH Nathan Phillips From The Last Time He Accused Students of Racism In 2015” #CovingtonCatholic

WATCH: For the first time, Covington Catholic students respond to the onslaught of death threats, slander, and libel they’ve faced in the last 48 hours.

What really happened @ the Lincoln Memorial with the native American and the Catholic now being persecuted !