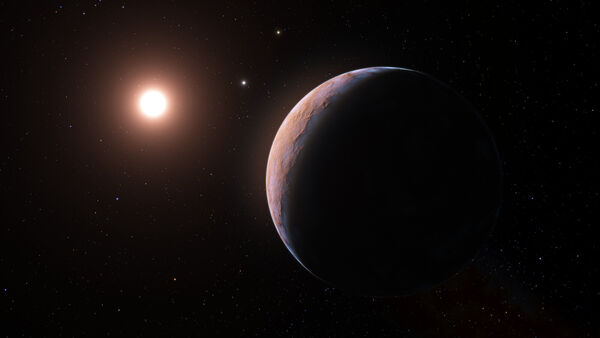 Rolling coverage of the international stories of interest to our readers

Source: New planet detected around star closest to the Sun

Astronomers have detected a new planet around the star closest to the Sun.

The candidate planet is the third detected in the system and is just a quarter of Earth’s mass, making it the lightest yet discovered orbiting this star – which is just over four light-years away from the Sun.

It is also one of the lightest exoplanets – a planet outside the Solar System – ever found, the researchers said.

Lead author Joao Faria, a researcher at the Institute of Astrophysics and Space Sciences in Portugal, said: “The discovery shows that our closest stellar neighbour seems to be packed with interesting new worlds, within reach of further study and future exploration.”

Named Proxima d, the newly discovered planet orbits Proxima Centauri at a distance of about four million kilometres – less than a 10th of Mercury’s distance from the Sun.

Astronomers found it orbits between the star and the habitable zone – the area around a star where liquid water can exist at the surface of a planet – and takes just five days to complete one orbit of Proxima Centauri.

The star is already known to host two other planets.

Proxima b, which orbits the star every 11 days, has a mass comparable to that of Earth, and is within the habitable zone.

Proxima c is on a longer five-year orbit around the star.

The discovery of Proxima b was confirmed in 2020 when scientists observed the system with a new instrument, the Echelle SPectrograph for Rocky Exoplanets and Stable Spectroscopic Observations (ESPRESSO), that had greater precision.

During these observations, astronomers spotted the first hints of a signal corresponding to an object with a five-day orbit.

But because the signal was so weak, the team conducted follow-up observations with ESPRESSO to confirm that it was due to a planet, and not simply a result of changes in the star itself.

Mr Faria said: “After obtaining new observations, we were able to confirm this signal as a new planet candidate.

“I was excited by the challenge of detecting such a small signal and, by doing so, discovering an exoplanet so close to Earth.”

The discovery is reported in the Astronomy and Astrophysics journal.