This new press release announces that there is no conclusive findings of suicide… yet.

Here is the new release:

On February 22, 2020 the Amador County Sheriff’s Office released initial details regarding Philip
Haney being found deceased in our jurisdiction. Mr. Haney was located in a park and ride open
area immediately adjacent to State Highway 16 near State Highway 124. Highway 16 is a busy
state highway and used as a main travel route to and from Sacramento. The location is less
than 3 miles from where he was living.

Currently we have scheduled a forensic autopsy to be performed by forensic pathologists from
the Sacramento County Coroner’s Office. Additionally we have reached out to our law
enforcement partners in the Federal Bureau of Investigation (FBI) to assist in analyzing
documents, phone records and a lap top that were recovered from the scene and Mr. Haney’s
RV. We are currently in possession of his vehicle, the firearm located at the scene, and his RV
and we will be requesting evidence processing assistance from the FBI on those items as well.
Our investigators conducted a neighborhood canvas and interviewed his RV park neighbors on
the day of the incident along with checking key areas for any video surveillance that may exist
from that time. The investigators are continuing to follow-up with the overwhelming number of
persons who are calling our office from throughout the United States asking for detailed
information on our investigation.

Unfortunately, there was misinformation immediately being put out that we have determined
Mr. Haney’s death to be a suicide. This is not the case. We are currently in the beginning
phase of our investigation and any final determination as to the cause and manner of Mr.
Haney’s death would be extremely premature and inappropriate. No determination will be made
until all evidence is examined and analyzed.

This investigation is still active and will be ongoing. No further details will be provided at this time. 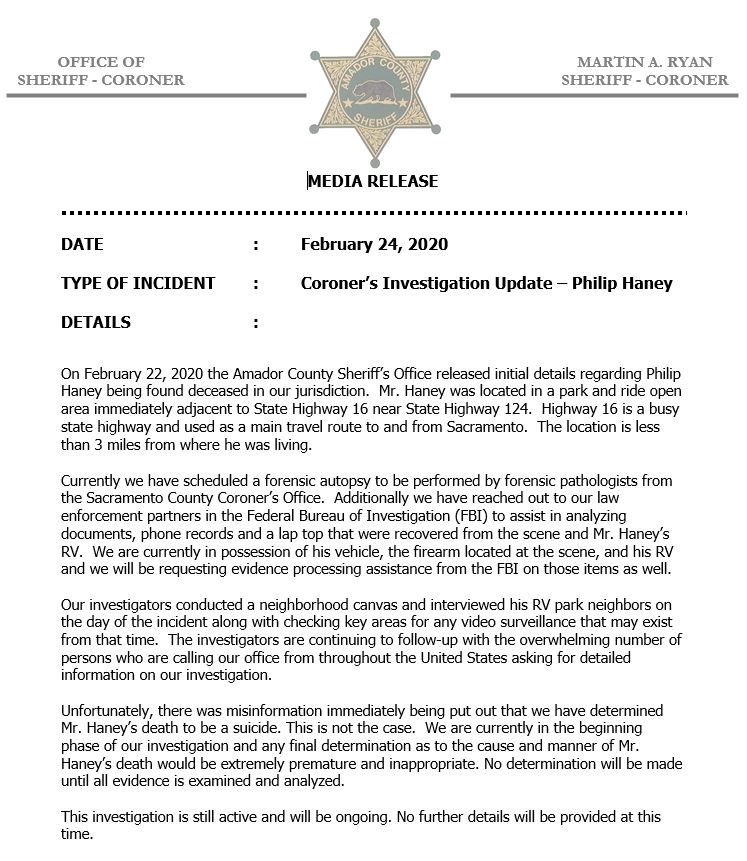